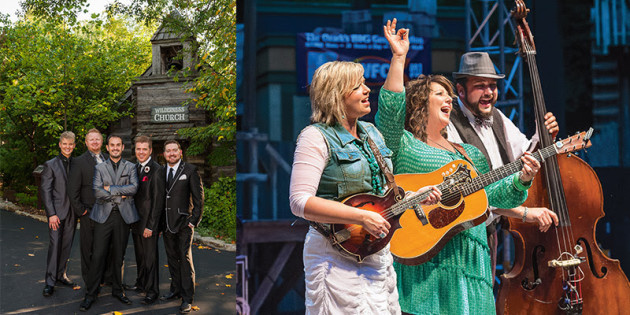 “Southern Gospel fans will find most of the chart-topping groups here, including Dove award winners and legendary bands,” said festival coordinator D.A. Callaway. “We also look for new artists coming up in this industry, adding new sounds to the rich heritage of Southern Gospel music.” The variety of performers and styles adds depth to the lineup of 64 groups featured during the festival, from The Booth Brothers to emerging artists like The Browders, he said.

Special Sunday worship services are presented with the Hosea Bilyeu Family on August 30, and with pastor and noted humorist Dennis Swanberg on September 6.

Throughout the festival, the park is open daily from 10 a.m. to 6 p.m. August 27 – September 7 with extended hours on Saturdays and on Sunday, September 6. Information: 800-831-4FUN or www.silverdollarcity.com.

Each cruise features a three-course meal from the Showboat’s Chef Larry, including slow-simmered beef roast and honey-Dijon glazed chicken topped off with the chef’s own Golden Brittle Lemon-Berry Torte. All meals are prepared onboard in the ship’s galley and served in the three-story atrium dining theater. Specialty dining options include the Paddle Wheel Club Room and Captain’s Row.

Joe Kleimanhttp://wwww.themedreality.com
Raised in San Diego on theme parks, zoos, and IMAX films, Joe Kleiman would expand his childhood loves into two decades as a projectionist and theater director within the giant screen industry. In addition to his work in commercial and museum operations, Joe has volunteered his time to animal husbandry at leading facilities in California and Texas and has played a leading management role for a number of performing arts companies. Joe has been News Editor and contributing author to InPark Magazine since 2011. HIs writing has also appeared in Sound & Communications, LF Examiner, Jim Hill Media, and MiceChat. His blog, ThemedReality.com takes an unconventional look at the attractions industry. Follow on twitter @ThemesRenewed Joe lives in Sacramento, California with his fiancé, two dogs, and a ghost.
Share
Facebook
Twitter
Linkedin
Email
Print
WhatsApp
Pinterest
ReddIt
Tumblr
Previous articleInPark Presents the Pavilions of EXPO Milano 2015
Next articleOlivier Moser Named Director of Design & Engineering and Mitchell Schuh Upped to Director of Technology at Smart Monkeys