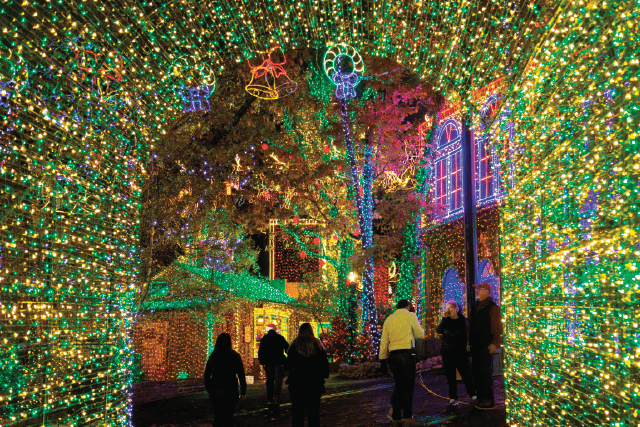 Thirty miles of new lights lead up to the new $26 million Time Traveler, the World’s Fastest, Steepest and Tallest Complete-Circuit Spinning Roller Coaster. Bright lights enhance the views from above for night rides on Time Traveler and all of the select rides open, as weather permits.

The light experience begins on the Square with the 5-Story Special Effects Christmas tree, a massive tree with over 350,000 colorful LED lights. The tree blazes to the movements of Christmas songs, with up to 100 light changes per second, while lights around the Square flash along.

The festival also features two original musical productions, A Dickens’ Christmas Carol and the final year of It’s a Wonderful Life. A Dickens’ Christmas Carol is an adaptation of the Dickens classic, with revolving sets, flying spirits, pyrotechnic special effects and a cast of 15, accompanied by a live band. It’s a Wonderful Life presents a musical interpretation of the classic film, with unique special effects and a cast of 14 singers/actors.

Since its debut more than two decades ago, Silver Dollar City’s An Old Time Christmas has become one of the country’s most recognized events for spectacular lighting and entertainment, and has been profiled as one of the top holiday celebrations by USA Today, CNN Travel, The Travel Channel and Good Morning America.

During An Old Time Christmas, Silver Dollar City is open Thursdays – Sundays Nov. 3 – 18, then Wednesdays – Sundays Nov. 21 – Dec. 30. Hours are 1 to 9 p.m. most days, with extended hours on select days, including some Fridays, Saturdays and Thanksgiving weekend.

Silver Dollar City is also open New Year’s Eve and New Year’s Day for a “New Year’s Celebration.” The 6.5 million holiday lights are still on and special entertainment is presented.

Joe Kleimanhttp://wwww.themedreality.com
Raised in San Diego on theme parks, zoos, and IMAX films, InPark's Senior Correspondent Joe Kleiman would expand his childhood loves into two decades as a projectionist and theater director within the giant screen industry. In addition to his work in commercial and museum operations, Joe has volunteered his time to animal husbandry at leading facilities in California and Texas and has played a leading management role for a number of performing arts companies. Joe previously served as News Editor and has remained a contributing author to InPark Magazine since 2011. HIs writing has also appeared in Sound & Communications, LF Examiner, Jim Hill Media, The Planetarian, Behind the Thrills, and MiceChat His blog, ThemedReality.com takes an unconventional look at the attractions industry. Follow on twitter @ThemesRenewed Joe lives in Sacramento, California with his wife, dog, and a ghost.
Share
Facebook
Twitter
Linkedin
Email
Print
WhatsApp
Pinterest
ReddIt
Tumblr
Previous articleFernando Eiroa resigns as CEO of Parques Reunidos
Next articleIAAPA names Hal McEvoy as President and CEO