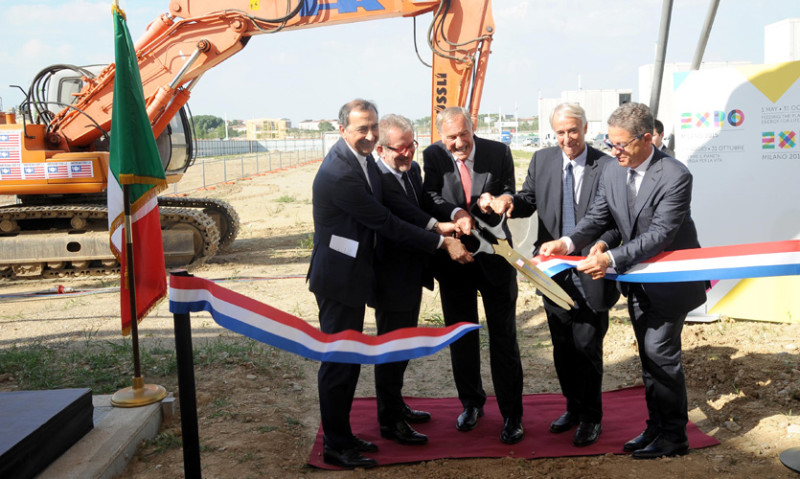 Washington, DC, USA (July 16, 2014) /PRNewswire/ — Friends of the USA Pavilion Milano 2015 today announced several key partnerships during a reception hosted by U.S. Secretary of State John Kerry to mark the groundbreaking for the USA Pavilion at Expo Milano 2015. GE joins a growing list of partners at the forefront of American innovation that will support the USA Pavilion at next year’s Expo, which is expected to attract more than 20 million visitors from May through October 2015 in Milan, Italy.

“As a global leader in advancing food security, the United States feels we have to seize this opportunity to be involved in the 2015 World Expo in a significant way,” said Secretary Kerry during today’s reception, attended by House Minority Leader Nancy Pelosi, former Secretary of Agriculture Dan Glickman, Ambassador David Thorne, Incoming Milan Consul General Philip Reeker, U.S. Special Representative for Global Partnerships Andrew O’Brien, U.S. Special Representative for Food Security Nancy Stetson, USA Pavilion partners and supporters, and other guests at the U.S. Department of State. “The Milan World Expo of 2015 is a chance for us to share with the world the work that American scientists, chefs, entrepreneurs, farmers, fishermen all continue to do day in and day out and hopefully help people to understand the ways in which we can make progress in the future.” 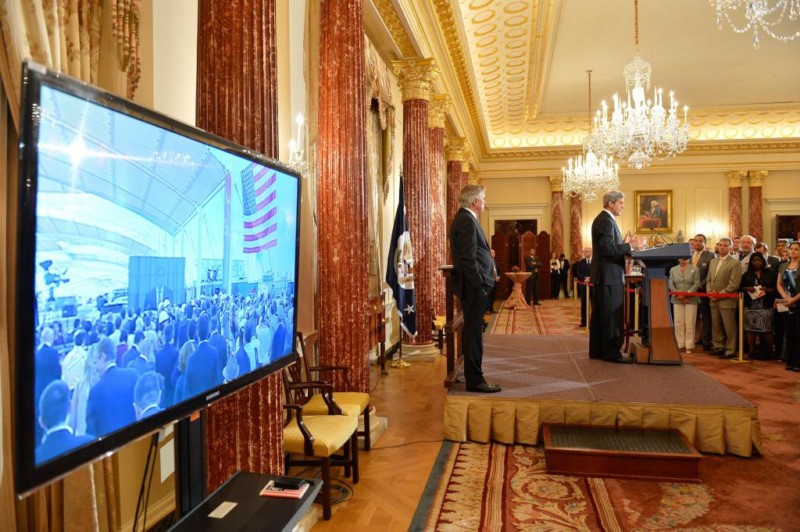 US Secretary of State John Kerry speaks in the Ben Franklin Room at the groundbreaking ceremony for the US Pavilion at Milan EXPO 2015.  The simultaneous ceremony in Milan can be seen on the monitor.  Courtesy United States Department of State.

During a simultaneous reception in Milan, U.S. Ambassador to Italy John Phillips joined members of the Italian government, Expo 2015 officials, and other partners at a groundbreaking ceremony for the USA Pavilion. Featuring a fully functioning vertical farm, the pavilion will showcase America’s unique role in the future of food around the world with the theme “American Food 2.0: United to Feed the Planet.” Pavilion programs and events will range from interactive exhibits and tastings to topical salons, regional food trucks and an innovation accelerator.

“GE is excited to participate in the USA Pavilion at Expo Milano 2015 and help represent the tremendous innovation that American companies are bringing to the global food system,” said Jeffrey Immelt, chairman and CEO of GE. “GE is dedicated to finding solutions to the world’s biggest challenges, including the challenge of feeding the world. The USA Pavilion presents a terrific opportunity to showcase what U.S. companies bring to this challenge, including sustainable solutions for energy, transportation, clean water and health.”

The Friends organization – a collaboration between the James Beard Foundation and the International Culinary Center, in association with the American Chamber of Commerce in Italy – is seeking partners to represent America’s diversity, innovation and entrepreneurial spirit, and create a global call to action around the challenges of feeding the planet. The U.S. is one of 140-plus countries participating in Expo Milano 2015: Feeding the Planet, Energy for Life.

“We’re thrilled to collaborate with GE and our other generous sponsors on this important opportunity to address food-system issues and challenges on an international stage,” said Dorothy Hamilton, president of Friends of the USA Pavilion Milano 2015. “Together, we’ll engage with the global community to start a powerful conversation, and encourage action, to meet the challenges of the global food crisis. America has a lot to offer to this discussion, both scientifically and culturally, and we welcome others who wish to join us in representing the very best of the USA to the world.”

READ WHAT INPARK’S EXPO SPECIALIST JAMES OGUL HAS TO SAY ABOUT THE USA PAVILION AND HIS LOOK AT THE DEVELOPMENT OF MILAN’S EXPO 2015.

Joe Kleimanhttp://wwww.themedreality.com
Raised in San Diego on theme parks, zoos, and IMAX films, InPark's Senior Correspondent Joe Kleiman would expand his childhood loves into two decades as a projectionist and theater director within the giant screen industry. In addition to his work in commercial and museum operations, Joe has volunteered his time to animal husbandry at leading facilities in California and Texas and has played a leading management role for a number of performing arts companies. Joe previously served as News Editor and has remained a contributing author to InPark Magazine since 2011. HIs writing has also appeared in Sound & Communications, LF Examiner, Jim Hill Media, The Planetarian, Behind the Thrills, and MiceChat His blog, ThemedReality.com takes an unconventional look at the attractions industry. Follow on twitter @ThemesRenewed Joe lives in Sacramento, California with his wife, dog, and a ghost.
Share
Facebook
Twitter
Linkedin
Email
Print
WhatsApp
Pinterest
ReddIt
Tumblr
Previous articleHow the US participated at the Taejon 93 and Lisbon 98 world expos – and didn’t at Hanover 2000
Next articleVillage Roadshow to Operate New 20th Century Fox Theme Park in South Korea