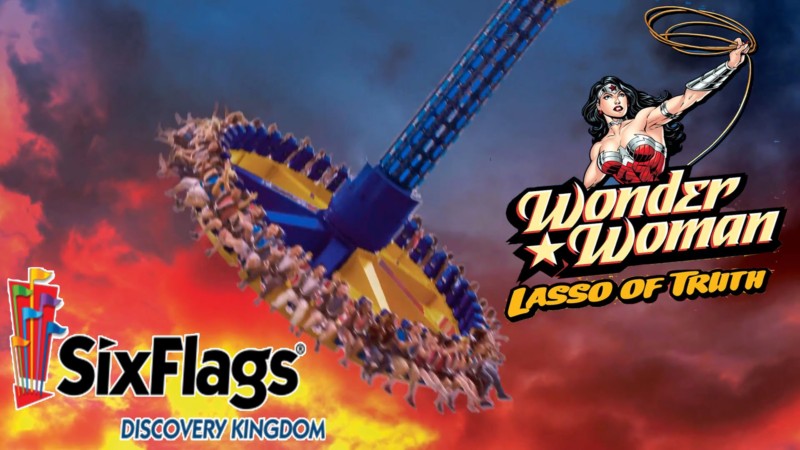 Grand Prairie, TX, USA — Six Flags Entertainment Corporation, the world’s largest regional theme park company, has announced new attractions for the 2017 season, featuring an extensive roster of Warner Brothers and DC Comics branded rides and attractions including the world debut of the next generation of the award-winning JUSTICE LEAGUE: Battle for Metropolis interactive dark ride. Additionally, the company is expanding its park portfolio with the opening of a new water park in Mexico and introducing thrilling rides at each of its other locations across North America.

“We are tremendously excited about the 2017 season and look forward to delighting our guests with the types of innovative rides, attractions and signature events they have come to expect from Six Flags,” said John Duffey, President and CEO. “We are equally thrilled to be adding a new park—Hurricane Harbor Oaxtepec Mexico—to the Six Flags family as we build on our commitment to deliver world-class entertainment for guests of all ages at every park, every year.”

In 2017, coming to Six Flags Magic Mountain, Six Flags Great Adventure, and as part of its 50th Anniversary celebration – Six Flags Over Georgia:

The award-winning JUSTICE LEAGUE: Battle for Metropolis. This multi-sensory dark ride features the most sophisticated technology available, completely immersing riders in a video gaming world. Guests become members of the JUSTICE LEAGUE Reserve Team and battle alongside BATMAN, SUPERMAN, WONDER WOMAN, GREEN LANTERN and THE FLASH against Lex Luthor, The Joker and his henchmen to save Metropolis. The Joker’s partner in crime, Harley Quinn, will join the band of villains during this epic battle at Six Flags Magic Mountain.

The Joker – Named among the Top 10 most anticipated new roller coasters by USA TODAY and FOX News, this thrilling roller coaster is set to wreak havoc in 2017. After being lifted straight up a 12-story, 90-degree hill, riders flip head-over-heels at least six times along the weightless journey. Thrill seekers will experience exhilarating leaps and dives along a horizontal plane, with unexpected drops as they tumble from one level to the next. The wing seats amp up the pandemonium since riders will experience all of this chaos with no track above or below — just the sky, ground and plenty of sinister thrills.

WONDER WOMAN Lasso of Truth – An extreme swing ride that spins guests in a 98-foot circle at speeds of 40 miles per hour atop a 24-story tower. Guests sit two across in open-air swings as they climb to the top of the tower while spinning round and round, high above the beautiful Maryland and D.C. landscape.

A massive pendulum-shaped thrill ride that swings 40 guests back and forth at 70 miles per hour, while rotating counterclockwise and climbing higher and higher to 147 feet in the air. This exciting attraction will bear the name Titan at La Ronde and will be known as WONDER WOMAN Lasso of Truth at Six Flags Discovery Kingdom.

Spinsanity – This high-flying attraction brings a unique level of thrill as the massive disc spins first one direction and then another, while swinging from side-to-side. Forty guests sit on motorcycle-style seats facing outward as the disc flies along the 51-foot high half-pipe track all while whirling around at 14 revolutions per minute. Spinsanity is the first-of-its-kind attraction at Six Flags St. Louis.

Coming to The Great Escape and Splashwater Kingdom:

Summer just got Bigger, Better and Wetter with the introduction of the all-new Bonzai Pipelines dueling water slides. The new attraction will feature a pair of twisting body slides with impressive heights, thrilling speeds and nearly 300 feet of pure splashing fun. A perfect way to beat the heat for thrill seekers and families alike, the slides will be located in the upper portion of Splashwater Kingdom. Bonzai Pipelines will be the water park’s 13th attraction and its first body slide tower.

Hurricane Harbor Oaxtepec Mexico in the beautiful state of Morelos. This tropical oasis will offer families a welcome summer retreat. The 67-acre park will feature an innovative new hybrid waterslide, a multi-level water play structure, a wave pool and a tranquil lazy river, among numerous other fun water attractions all set among a lush, inviting landscape. Hurricane Harbor Oaxtepec will be Six Flags’ 19th park, and is scheduled to open in February 2017.

This fall, Six Flags thrills continue with the biggest Halloween event on the planet—Fright Fest® featuring more ghouls, more haunted mazes and more “things that go bump in the night” than ever before. Among the many new haunts, a state-of-the-art scare zone, Suicide Squad: The Six Flags Fright Fest Experience. This new featured section will transform the DC UNIVERSE area at Six Flags Magic Mountain into DC Midway City, where some of the “Worst Heroes Ever” from the film Suicide Squad will be roaming the streets. State-of-the-art digital imagery and fiery special effects will create an inferno as buildings burst into flames and creatures attack from every angle. Also part of this year’s Fright Fest at eight parks, guests can experience the next evolution of virtual reality with Rage of the Gargoyles, a chilling, futuristic battle between good and evil featuring the first-ever fully interactive roller coaster gaming experience. Riders, wearing Samsung Gear VR headsets, are pilots seated in the cockpit of an Apache-style helicopter, trying to fight off an army of terrorizing blood-thirsty gargoyles. This groundbreaking VR coaster gaming experience is controlled through head movements, allowing riders to keep their hands on the lap bar as they shoot at moving targets.

Then later this year, Six Flags St. Louis and Six Flags America join seven other Six Flags parks by ringing in the holidays with Holiday in the Park®—a time-honored Six Flags tradition featuring a winter wonderland of all the beloved sights and sounds of the season, yummy holiday cuisine along with guest favorite rides and attractions set against the backdrop of millions of twinkling lights.

Joe Kleimanhttp://wwww.themedreality.com
Raised in San Diego on theme parks, zoos, and IMAX films, Joe Kleiman would expand his childhood loves into two decades as a projectionist and theater director within the giant screen industry. In addition to his work in commercial and museum operations, Joe has volunteered his time to animal husbandry at leading facilities in California and Texas and has played a leading management role for a number of performing arts companies. Joe has been News Editor and contributing author to InPark Magazine since 2011. HIs writing has also appeared in Sound & Communications, LF Examiner, Jim Hill Media, and MiceChat. His blog, ThemedReality.com takes an unconventional look at the attractions industry. Follow on twitter @ThemesRenewed Joe lives in Sacramento, California with his fiancé, two dogs, and a ghost.
Share
Facebook
Twitter
Linkedin
Email
Print
WhatsApp
Pinterest
ReddIt
Tumblr
Previous articleDubai: IMG Worlds of Adventure officially opens
Next articleHistoric Statue at Philadelphia’s Franklin Institute Illuminated by Barco Laser Phosphor Projectors