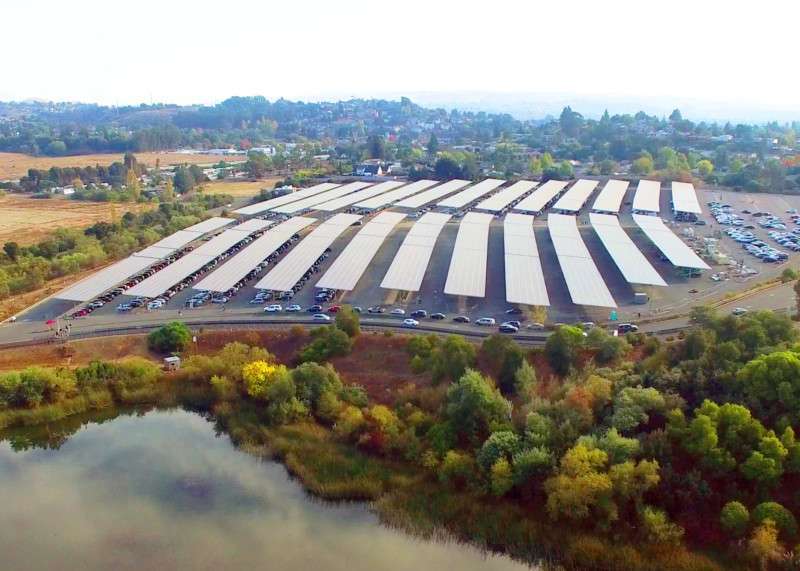 Six Flags Discovery Kingdom, in partnership with sPower and Borrego Solar Systems, made the official switch to solar power at a special event to kick off the park’s 12th annual Holiday in the Park, the first to be powered by renewable energy. The event included remarks by Congressman Mike Thompson and Vallejo Mayor Bob Sampayan, who flipped the giant, ceremonial switch, officially flipping the park to solar energy, and turning on millions of twinkling lights. Moving forward, 80% of the park’s energy usage will be powered by one of the largest solar carport installations in the country.

“We are thrilled to be introducing the nation’s first solar powered Holiday in the Park events. The marvelous wonder of this special time of year truly comes alive in our parks with a smorgasbord of seasonal delights to see and experience,” said Senior Vice President of US Park Operations Tom Iven. “Our elves go all out to deck the largest halls, trim the tallest trees and turn millions of lights on extra bright to welcome our guests to the biggest and most immersive holiday celebration anywhere in the world. No one else but Six Flags could offer beautiful, falling snow on cue, scrumptious treats, dashing thrill rides, and the chance to make special memories with Santa and Bugs Bunny. A visit to Holiday in the Park is on everyone’s wish list this season.”

Key facts about the solar installation include:

Will offset 8,400 tons of carbon dioxide equivalents each year, which is the same as taking 1,800 cars off the road;

The park will be able to offset 80% of its energy usage with solar power;

Over 360 individuals were employed in association with the construction of the project;

Six Flags Discovery Kingdom is the first theme park on the West Coast powered by solar energy; and

The park will be home to one of the largest solar carport installations in the country.

Six Flags Discovery Kingdom features more than 60 rides and attractions, including unique, up close and interactive animal experiences. Holiday in the Park is open weekends through January 2020 and is included with all active Memberships and Season Passes. For specific park hours and information, visit sixflags.com/discoverykingdom/.

Joe Kleimanhttp://wwww.themedreality.com
Raised in San Diego on theme parks, zoos, and IMAX films, InPark's Senior Correspondent Joe Kleiman would expand his childhood loves into two decades as a projectionist and theater director within the giant screen industry. In addition to his work in commercial and museum operations, Joe has volunteered his time to animal husbandry at leading facilities in California and Texas and has played a leading management role for a number of performing arts companies. Joe previously served as News Editor and has remained a contributing author to InPark Magazine since 2011. HIs writing has also appeared in Sound & Communications, LF Examiner, Jim Hill Media, The Planetarian, Behind the Thrills, and MiceChat His blog, ThemedReality.com takes an unconventional look at the attractions industry. Follow on twitter @ThemesRenewed Joe lives in Sacramento, California with his wife, dog, and a ghost.
Share
Facebook
Twitter
Linkedin
Email
Print
WhatsApp
Pinterest
ReddIt
Tumblr
Previous articleLarge Format 3D printing open house scheduled for December 4 in Anaheim
Next articleMood Media expands Technomedia through merger of three divisions