Haiyan, China — Ground was officially broken January 4 on the 30 billion yuan (USD $4.6 billion) real estate development that is to include the first Six Flags park in China, Six Flags Haiyan. 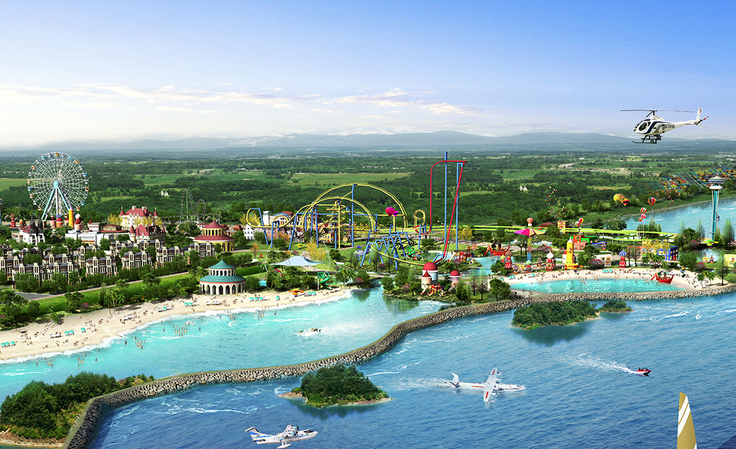 The resort that includes Six Flags Haiyan was the biggest of 11 major projects that broke ground in Zhejiang projects, and because of its unique nature as the only large-scale integration cultural tourism project garnered a significant amount of attention. It is expected to create over 100,000 jobs and attract over 12 million visitors per year.

The first piece of the development will be the new 234 million yuan (USD $36 million) exhibition center which will cover over 3800 acres and is scheduled for completion by the end of 2016. The Six Flags theme park is expected to open in 2019.

Joe Kleimanhttp://www.themedreality.com
Raised in San Diego on theme parks, zoos, and IMAX films, Joe Kleiman would expand his childhood loves into two decades as a projectionist and theater director within the giant screen industry. In addition to his work in commercial and museum operations, Joe has volunteered his time to animal husbandry at leading facilities in California and Texas and has played a leading management role for a number of performing arts companies. Joe has been News Editor and contributing author to InPark Magazine since 2011. HIs writing has also appeared in Sound & Communications, LF Examiner, Jim Hill Media, and MiceChat. His blog, ThemedReality.com takes an unconventional look at the attractions industry. Follow on twitter @themedreality Joe lives in Sacramento, California with his fiancé, two dogs, and a ghost.
Share
Facebook
Twitter
Linkedin
Email
Print
WhatsApp
Pinterest
ReddIt
Tumblr
Previous articleShanghai Disney Announces June 16 Opening Date for First Disney Resort in Mainland China
Next articleSMPTE to Receive Special Award from Motion Picture Academy at 2016 Sci Tech Oscars

Jackalope Junction offers “Gateway to the Grand Canyon” for its location