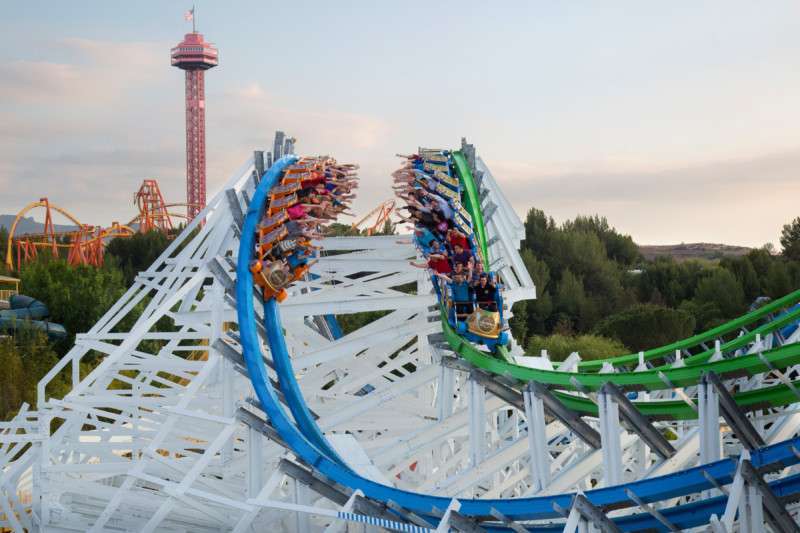 Six Flags Entertainment today announced plans to enter the destination travel market with its Southern California flagship property—Six Flags Magic Mountain, launching a 365-day operation on January 1, 2018. Located in the heart of one of the biggest U.S. travel markets with more than 47 million visitors annually and a noted theme park mecca, Six Flags Magic Mountain will now have an operating calendar on par with all other theme parks in Southern California.

“With the best collection of thrills in the world and the Six Flags brand expanding globally, this is the perfect time for one of our flagship properties to make the business transition to a 365-day operating schedule in order to maximize travel industry opportunities. Six Flags will now provide a thrilling vacation option to both international and domestic visitors coming to enjoy Southern California,” stated Jim Reid-Anderson, Chairman, President and CEO of Six Flags Entertainment Corporation. “We can also now further leverage our thrill brand to the population base of 24-million Southern Californians and take advantage of new shoulder season business growth.”

The Valencia-based theme park first opened in 1971, and in 2005, became the state’s first multi-gated entertainment complex with the opening of Hurricane Harbor water park. Since then, both parks have operated limited schedules, with Magic Mountain running year round on weekends and holidays in the off season, and daily throughout the spring and summer months. The “Thrill Capital of the World” boasts a record-breaking 19 coasters, and over 100 rides, shows, and attractions for the entire family, including the newly launched JUSTICE LEAGUE™: Battle for Metropolis, which opened in July. In addition to its thrill product, the entertainment complex also offers award-winning events such as Fright Fest®, voted #1 Halloween event by USA TODAY readers, and Holiday in the Park® during the winter holidays. New events are planned for the additional 100 days of the operating calendar, which is expected to generate new visitors from markets throughout California, the U.S., and around the world.

“I can wholeheartedly say there’s never been a better time to discover Los Angeles as our endlessly entertaining destinations like Six Flags Magic Mountain continue to mesmerize 47 million annual visitors,” said Ernest Wooden Jr., president and CEO of the Los Angeles Tourism & Convention Board. “As the undisputed Entertainment Capital of the World, we invite travelers from across the globe to immerse themselves in our thriving culinary scene, rich cultural life and world-class attractions.”

“This is great news for Los Angeles. By opening the park all year round, Six Flags is significantly enhancing the tourism and travel industry, creating jobs and spurring economic growth for the entire region,” said Los Angeles County Supervisor Kathryn Barger.

In addition to tourism-related opportunities, this new 365-day expanded calendar will also create new opportunities for many market segments that visit during the off-season, including school groups, especially the emerging “rite of passage” event for graduating high school seniors who come for Six Flags Grad Nites from across western states. New convention business, extended stays, and business travel is expected throughout the year, helping to bolster the economy of local Southern California communities. Further, the new calendar will add value and benefits to Six Flags Season Pass Holders, as they will now be able to visit Six Flags Magic Mountain any day of the year without any blackout dates, including Fright Fest and Holiday in the Park. Considered one of the best Season Pass programs in the theme park industry, there is no pricing premium to buy a “no blackout” season pass. A Six Flags Season Pass can be used at any of the 12 Six Flags Theme Parks in the U.S., Montreal, Canada and Mexico City.

Joe Kleimanhttp://wwww.themedreality.com
Raised in San Diego on theme parks, zoos, and IMAX films, InPark's Senior Correspondent Joe Kleiman would expand his childhood loves into two decades as a projectionist and theater director within the giant screen industry. In addition to his work in commercial and museum operations, Joe has volunteered his time to animal husbandry at leading facilities in California and Texas and has played a leading management role for a number of performing arts companies. Joe previously served as News Editor and has remained a contributing author to InPark Magazine since 2011. HIs writing has also appeared in Sound & Communications, LF Examiner, Jim Hill Media, The Planetarian, Behind the Thrills, and MiceChat His blog, ThemedReality.com takes an unconventional look at the attractions industry. Follow on twitter @ThemesRenewed Joe lives in Sacramento, California with his wife, dog, and a ghost.
Share
Facebook
Twitter
Linkedin
Email
Print
WhatsApp
Pinterest
ReddIt
Tumblr
Previous articlePolin Designs and Develops Kosovo’s Newest and Largest Waterpark
Next articleFollowing Announcement of Korea Park, Lionsgate Promotes Kerry Phelan to Oversee Attractions Projects