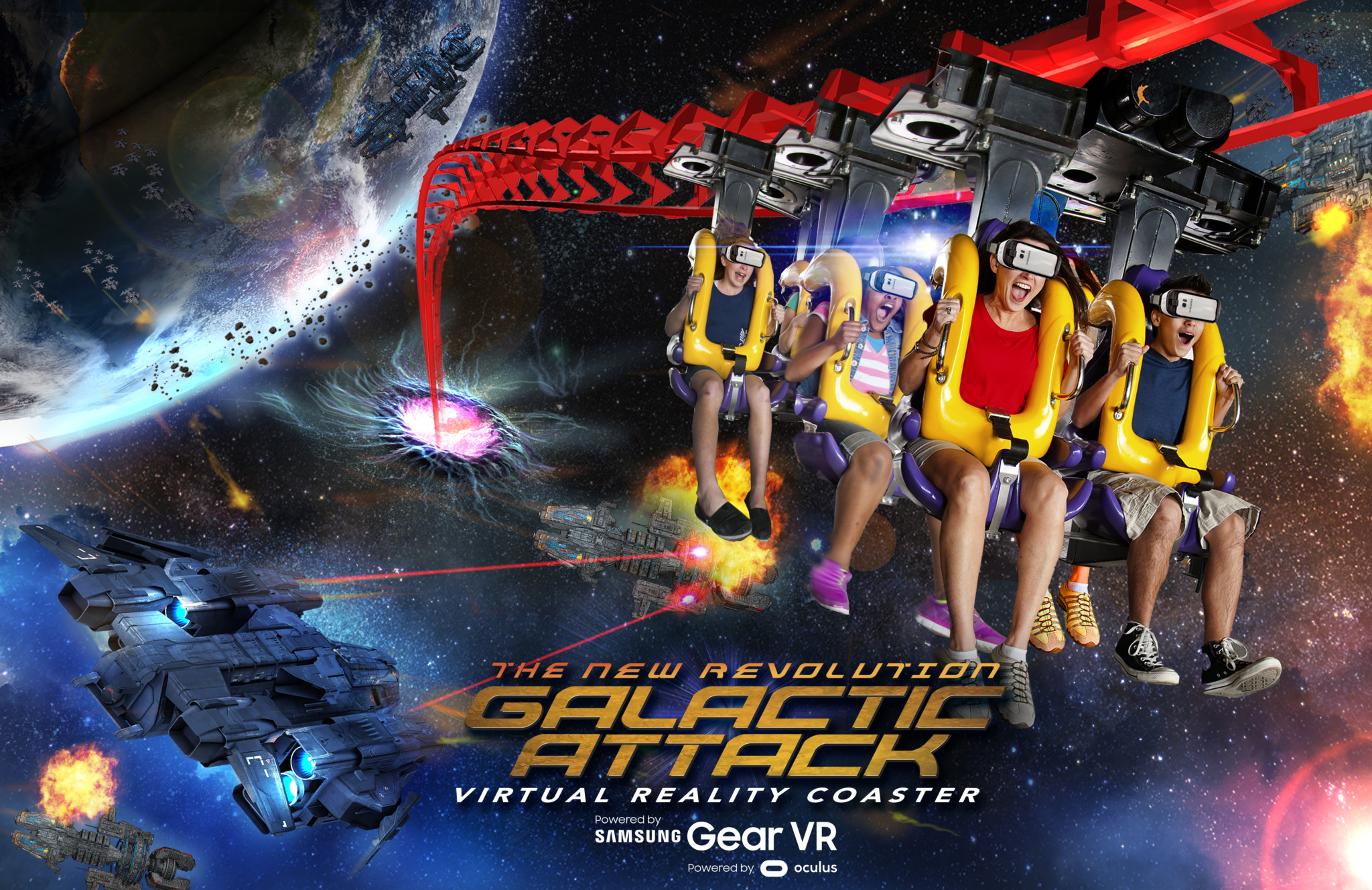 Six Flags Entertainment Corporation and Samsung Electronics America, Inc., the “Official Technology Partner” of the world’s largest regional theme park company, have announced their renewed collaboration on virtual reality roller coasters with the unveiling of a new twist on the experience at Six Flags parks.

Last spring, the two companies joined forces to introduce North America’s first Virtual Reality (VR) Roller Coasters using Samsung Gear VR powered by Oculus, and now in 2017— for the first time ever, riders will be offered a one-of-a-kind mixed reality experience, along with another world’s first—complex gameplay on a VR coaster, where riders make key decisions during the course of the ride that can affect their scoring at the end. The New Revolution Galactic Attack makes its world debut at Six Flags Magic Mountain, near Los Angeles, and Six Flags Discovery Kingdom, near San Francisco, offering park guests a thrilling, fully immersive ride of their lives as they battle to save the planet from an impending alien drone invasion.

“Six Flags is proud to be partnering with Samsung to develop the newest, most innovative thrill ride experience in the theme park industry,” said Brett Petit, Senior Vice President of Marketing and Sales. “This mixed reality technology is truly groundbreaking and like nothing our guests have ever experienced. Six Flags and Samsung changed the game last year with VR on twelve roller coasters and now we are breaking new ground yet again.”

“Our strategic partnership with Six Flags enables millions of consumers to experience virtual reality for the first time by bringing Gear VR to real roller coasters at theme parks across the country. We are always aiming to create immersive, never been done before experiences with our Samsung VR ecosystem as the focal point, so these new experiences at Six Flags are completely complementary to that key objective. We are thrilled to continue to work with Six Flags and bring VR to the mainstream,” said Marc Mathieu, Samsung Electronics America’s Chief Marketing Officer.

When riders board the coasters and don their Samsung Gear VR headsets, they will be introduced to the device’s passthrough camera functionality, instantly making riders aware of their surroundings, by allowing them to see the “real world,” including the person seated next to them— along with virtual content. As they get settled into the ride, a heads up display overlay on the passthrough camera view will show data like current status of weaponry, time codes, fuel cells, and a countdown clock. Cresting the lift hill, a massive, swirling wormhole comes into view. As riders drop at high speeds, the mixed reality view changes to a completely immersive, virtual reality environment and a fighter spaceship cockpit materializes and envelops the riders into a tunnel of light. At the bottom of the first hill, riders are launched into the middle of a space battle, coming under attack from flying drones firing lasers and missiles. After swinging through tight channels, narrowly dodging drones and artillery fire, riders are brought into one of three drone bays, each of which offer a completely different gaming experience and three different endings.

To commemorate the opening weekend of The New Revolution Galactic Attack on February 18-20, both parks are “attacking” hunger by hosting a food drive. Every paid guest or season pass holder who brings a full bag of non-perishable food items to support local regional food banks will be given an exclusive opportunity to enjoy the VR ride experience before it opens to the public the following weekend, February 25-26 at Six Flags Magic Mountain and February 20 at Six Flags Discovery Kingdom.

Joe Kleimanhttp://wwww.themedreality.com
Raised in San Diego on theme parks, zoos, and IMAX films, Joe Kleiman would expand his childhood loves into two decades as a projectionist and theater director within the giant screen industry. In addition to his work in commercial and museum operations, Joe has volunteered his time to animal husbandry at leading facilities in California and Texas and has played a leading management role for a number of performing arts companies. Joe has been News Editor and contributing author to InPark Magazine since 2011. HIs writing has also appeared in Sound & Communications, LF Examiner, Jim Hill Media, and MiceChat. His blog, ThemedReality.com takes an unconventional look at the attractions industry. Follow on twitter @ThemesRenewed Joe lives in Sacramento, California with his fiancé, two dogs, and a ghost.
Share
Facebook
Twitter
Linkedin
Email
Print
WhatsApp
Pinterest
ReddIt
Tumblr
Previous articleExplore Real Life Denizens of the Deep on LEGOLAND Dubai’s New Submarine Adventure
Next articleJack Rouse Associates Brings Mars to Down to Earth at Space Center Houston