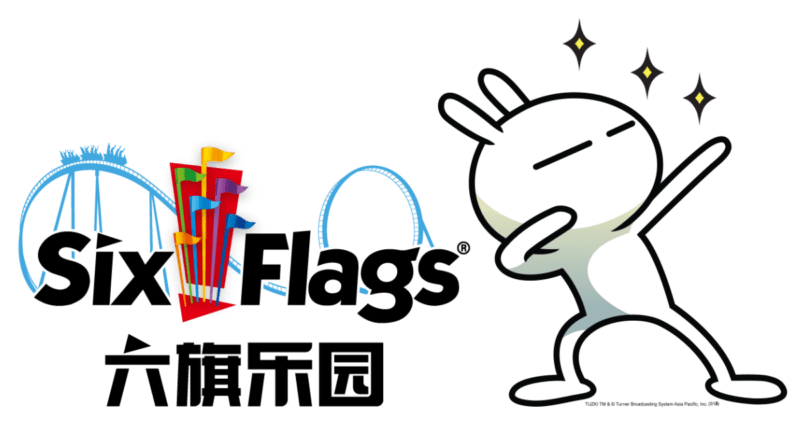 The first addition—a new Tuzki-branded dark ride—is joining the lineup of world class, record-breaking rides and attractions at Six Flags Zhejiang and Six Flags Chongqing, which are scheduled to open in 2019 and 2020 respectively.

“The Six Flags brand is synonymous with innovative thrills for all ages,” said President of Six Flags International Development Company, David McKillips. “We look forward to working with Turner Asia Pacific to create immersive, content-rich attractions throughout our China parks.”

Ricky Ow, President of Turner Asia Pacific, said, “We are honored to join forces with these two best-in-class companies to bring memorable, one-of-a-kind entertainment offerings to China. This is the first time that Tuzki’s loyal fans will be able to really experience their favorite emoticon in such a tangible and authentic way. Together with our partners, Six Flags and Riverside Investment Group, we are excited to offer this immersive, new attraction to park guests.”

In addition to the new ride, both parks will also feature Tuzki theming and new retail locations offering branded merchandise. The Turner-owned rabbit IP is a household name in China, with millions of Tuzki emoticons exchanged through instant messaging apps every day.

“This partnership brings together two powerhouse entertainment brands with a long tradition of making people happy,” said Riverside Investment Group Chairman, Zhe Li. “Tuzki is a beloved icon for China’s younger generation and is the perfect addition to the Six Flags family of parks.”

The agreement between Turner and Riverside Investment Group also allows for other Turner-owned IP from Cartoon Network’s extensive portfolio of characters and shows to be featured inside Six Flags Kids World. Six Flags Kids World—the first park of its kind and designed especially for families with young children—will be built adjacent to both Six Flags Zhejiang and Six Flags Chongqing. 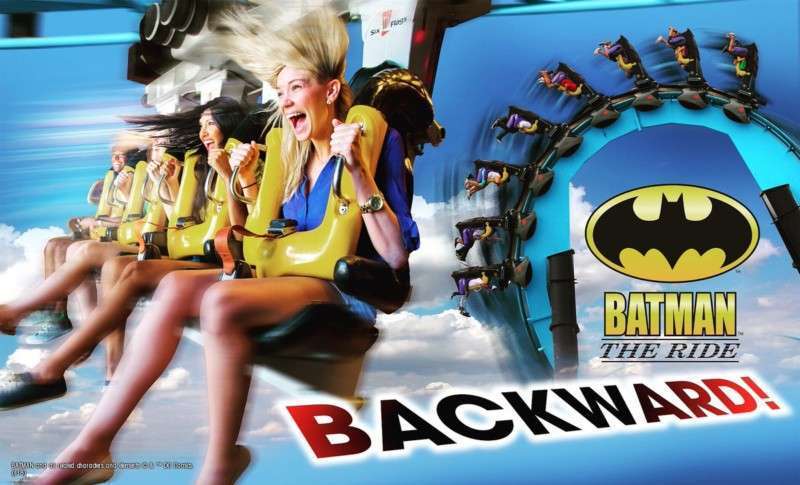 Six Flags St. Louis in partnership with Warner Bros. Consumer Products, on behalf of DC Entertainment, launched its 2018 season with a new roller coaster experience. For the first time ever, the park is flipping one of its most innovative roller coasters backward. BATMAN: The Ride backward delivers even more intense thrills as it undergoes a gravity-defying role reversal through May 13.

“Six Flags leads the way in innovation and now we are ramping the intensity level way up,” said Six Flags St. Louis Park President, Phil Liggett. “We are challenging thrill-seekers to take on this steel beast…backward. Never before have our guests been able to experience this unique sensation of careening around curves and flying through loops… without being able to see them coming. BATMAN: The Ride Backward delivers on our commitment to offer new and unique thrills to our guests every single year.”

Using a state-of-the art, specially designed chassis, the ski-lift style cars on BATMAN: The Ride will be turned 180° in the opposite direction. Riders will experience the thrill as they take flight on this one-of-a-kind adventure:

Leave the Batcave™ and ascend up the 10-story lift—backward;

Experience nearly 2,700 feet of track at speeds of 50 miles per hour—backward; and

Both a backward and a forward train will be in operation on BATMAN: The Ride, so guests who prefer to face their thrills head on may still do so. Since opening in 1995, BATMAN: The Ride has given over 23.7 million thrilling rides and continues to reign as one of the most popular roller coasters in the world. 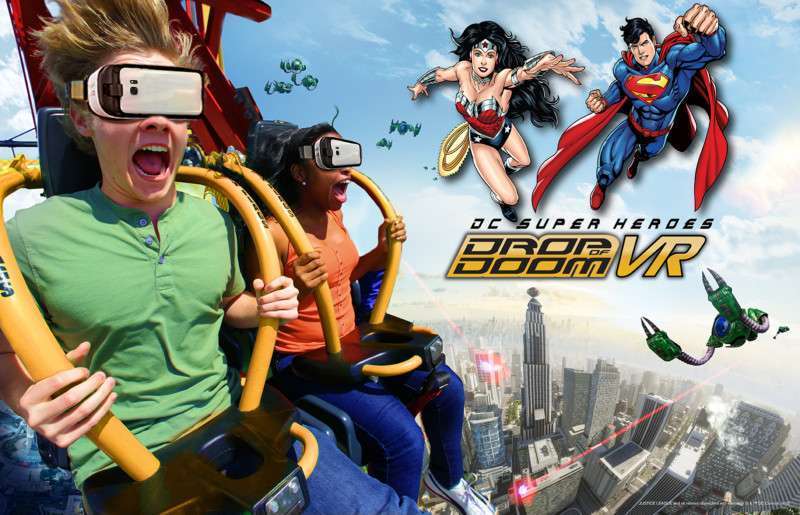 Six Flags Magic Mountain, in partnership with Warner Bros. Consumer Products, on behalf of DC Entertainment, has announced a new, extreme virtual reality experience coming to one of the world’s tallest and fastest drop tower rides. For a limited time, guests can experience the new DC SUPER HEROES Drop of Doom VR. Thrill-seekers will don special VR headsets to view the action as SUPERMAN and WONDER WOMAN battle their nemesis, LEX LUTHOR, while plunging 400 feet at speeds up to 85 mph.

“As the world leader in ride innovation, Six Flags is taking virtual reality to the next level by leveraging the unique thrill of one of the world’s tallest drop towers and adding an epic virtual battle of good versus evil,” stated Six Flags Magic Mountain Park President, Neal Thurman. “Combining the most iconic DC Super Heroes, Wonder Woman and Superman, with state-of-the-art technology, DC Super Heroes Drop of Doom VR delivers an awe-inspiring new thrill for spring 2018.”

When riders buckle into their floorless seats and strap on their VR headsets, they are immersed into a 360-degree virtual world where they are unwittingly invited by DC Super-Villain, Lex Luthor, to test the newest LexCorp levitation technology. Among the highlights of this interactive storyline:

Lex Luthor levitates riders with his anti-gravity ray gun and they begin to float upward, rising high above the skyscrapers;

Wonder Woman and Superman dash to the rescue and an epic battle ensues high in the air over Metropolis;

Wonder Woman clashes with an army of flying LexBots while Superman is in fierce combat with Lex Luthor; and

High in the sky, the battle spins out of control and riders fall a thousand feet—straight down, to the city streets far, far below.

Riders must be at least 48” tall to ride DC SUPER HEROES Drop of Doom VR, and at least 13 years old to experience VR. Six Flags Magic Mountain launched their very first VR coaster experience in 2016 on The New Revolution.

Joe Kleimanhttp://wwww.themedreality.com
Raised in San Diego on theme parks, zoos, and IMAX films, InPark's Senior Correspondent Joe Kleiman would expand his childhood loves into two decades as a projectionist and theater director within the giant screen industry. In addition to his work in commercial and museum operations, Joe has volunteered his time to animal husbandry at leading facilities in California and Texas and has played a leading management role for a number of performing arts companies. Joe previously served as News Editor and has remained a contributing author to InPark Magazine since 2011. HIs writing has also appeared in Sound & Communications, LF Examiner, Jim Hill Media, The Planetarian, Behind the Thrills, and MiceChat His blog, ThemedReality.com takes an unconventional look at the attractions industry. Follow on twitter @ThemesRenewed Joe lives in Sacramento, California with his wife, dog, and a ghost.
Share
Facebook
Twitter
Linkedin
Email
Print
WhatsApp
Pinterest
ReddIt
Tumblr
Previous article“Planet Power”, Newest Giant Screen Film from nWave, Holds World Premiere at Smithsonian
Next articleSaudi Crown Prince Mohammad bin Salman Meets With American Leaders About Planned Integrated Destinations