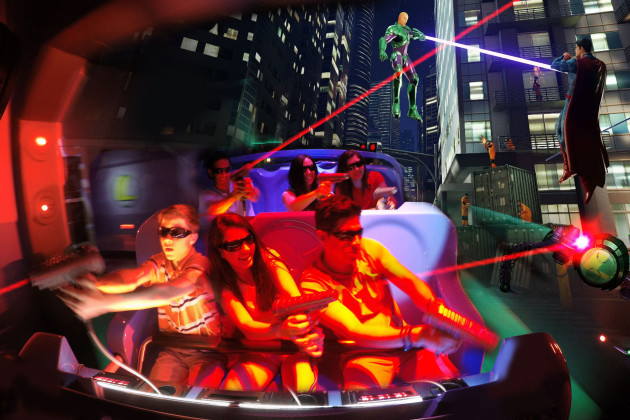 Arlington, TX, USA (May 19, 2015) /BUSINESS WIRE/ — Six Flags Over Texas, in partnership with Warner Bros. Consumer Products and DC Entertainment, announces the debut of JUSTICE LEAGUE: Battle for Metropolis. Named by USA Today as one of the most anticipated new attractions of the year, JUSTICE LEAGUE: Battle for Metropolis promises to take the industry by storm and have park guests clamoring for the chance to team up with the world’s most famous Super Heroes in a multi-sensory, first-of-its-kind dark ride adventure.

“We are excited to partner with the popular DC Comics characters to bring this level of unmatched, interactive thrills to our guests this season,” said Park President Steve Martindale. “JUSTICE LEAGUE: Battle for Metropolis is like no other ride we’ve ever built. The technology is second to none and guests will be fully immersed in the action from start to finish.”

This next generation of interactive thrills offers guests the ultimate dark ride adventure when they team up with SUPERMAN, BATMAN, WONDER WOMAN, GREEN LANTERN and THE FLASH after accepting the challenge to outwit Lex Luthor and The Joker’s plans to destroy the city of Metropolis. As JUSTICE LEAGUE Reserve Team members, riders travel in sleek six-passenger custom designed, motion-based vehicles and engage in a full-sensory battle, complete with 4D effects of fire, cannon blasts, and explosions all while experiencing hairpin, 360-degree turns and the world’s first-ever virtual loop on a dark ride. 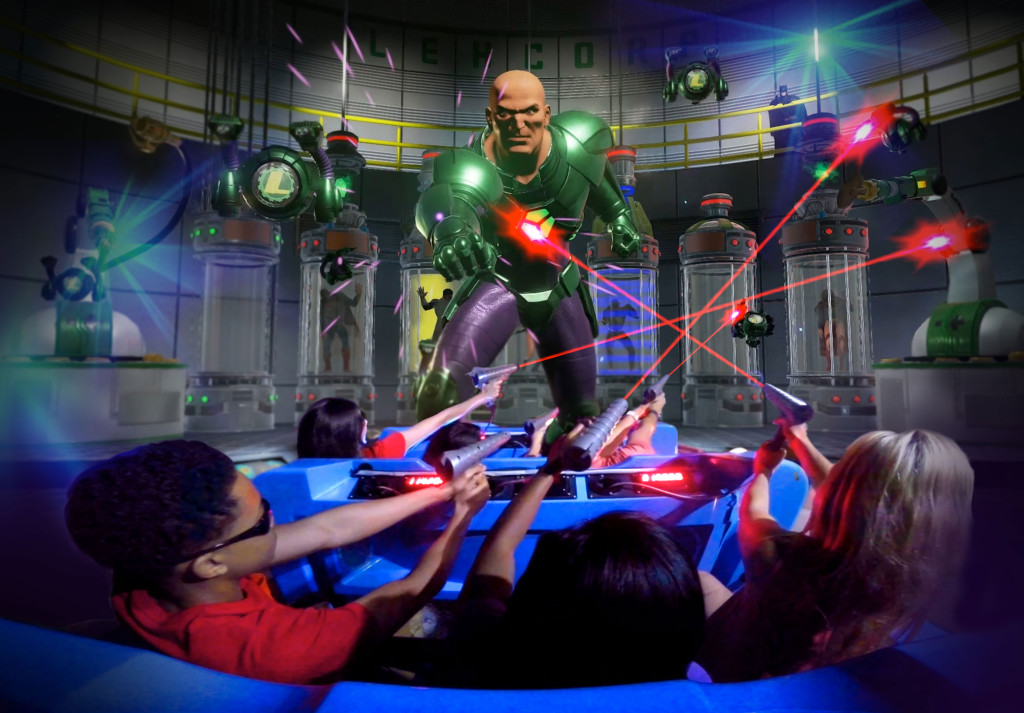 Riders use interactive laser blasters and attempt to extinguish the 600 virtual and tangible targets featured throughout the attraction, including a life-like villain animatronic, robotic henchmen, helicopters, a hologram and an interactive fog screen. The realistic features take the ride gaming experience to an unprecedented level. 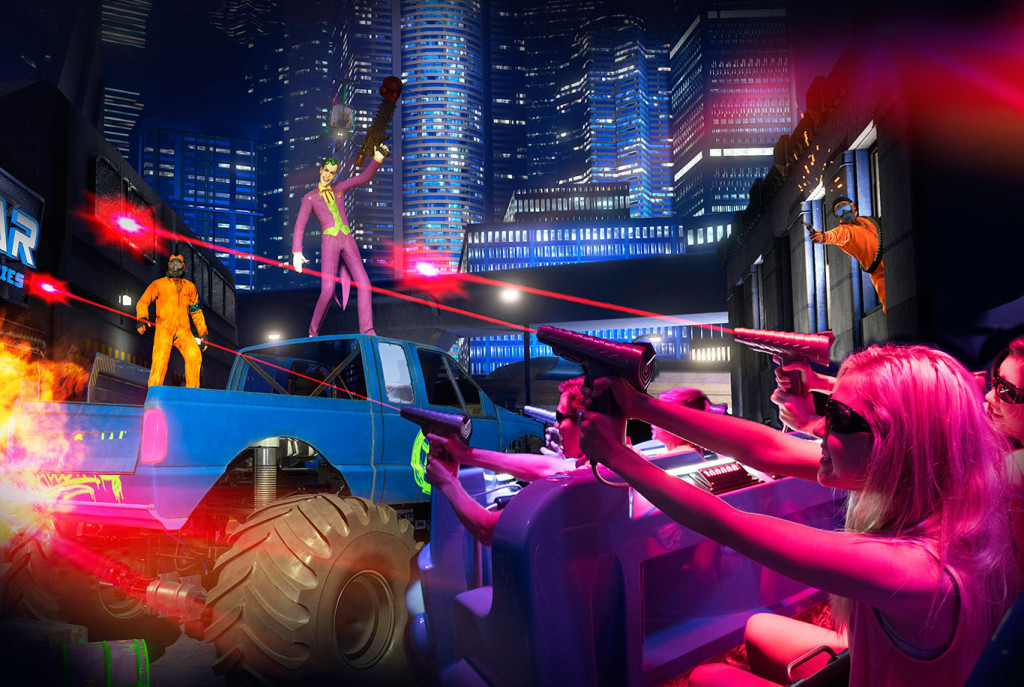 –The ride features custom, motion-based vehicles that seat 6 passengers, each armed with a stun blaster.

–The seats offer multi-degrees-of-freedom, allowing guests to experience the motion of the vehicles synced with the action on the media screens. ∗ The ride offers the world’s first-ever virtual loop on a dark ride. 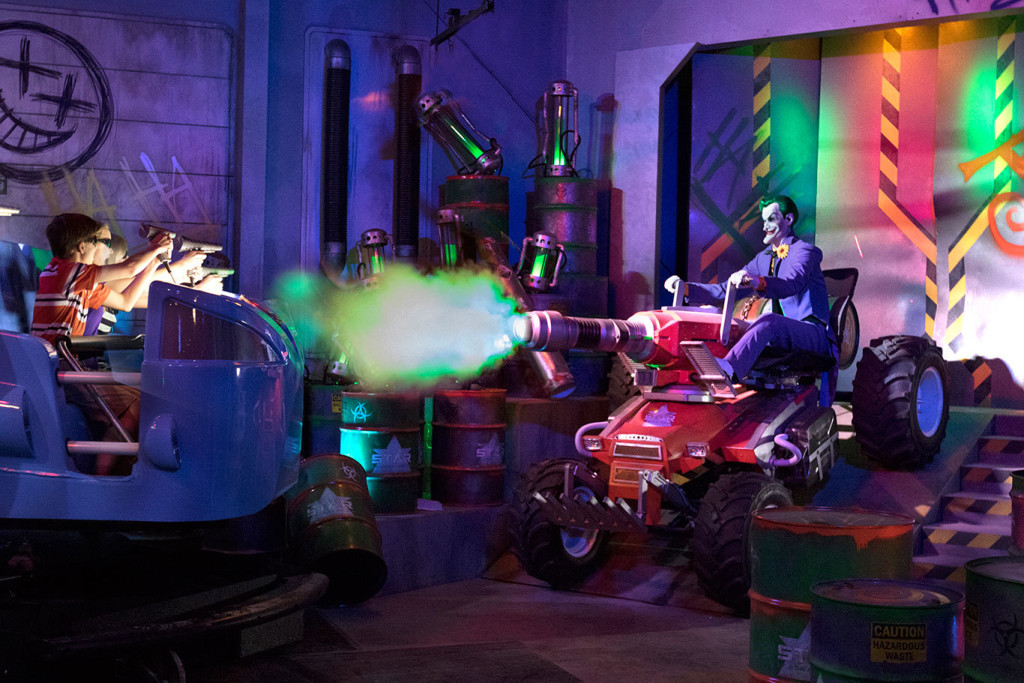 –The ride uses real-time gaming allowing the characters and elements to react with the 600 Virtual and Tangible targets that are featured throughout the ride including, for the first time ever, an interactive Fog Screen with targets that guests will ride through.

–The interaction system is entirely wireless, including the communication between the vehicles, targets, stun gun devices and scoring system.

–The interaction system is designed to allow an unlimited amount of targets to be displayed during the on-screen shooting sequences.

–Guests have the ability to shoot up to 20 times per second. When guests shoot at targets with their stun blasters, it only takes 5 milliseconds for the interaction computer to react on-screen.

Joe Kleimanhttp://wwww.themedreality.com
Raised in San Diego on theme parks, zoos, and IMAX films, InPark's Senior Correspondent Joe Kleiman would expand his childhood loves into two decades as a projectionist and theater director within the giant screen industry. In addition to his work in commercial and museum operations, Joe has volunteered his time to animal husbandry at leading facilities in California and Texas and has played a leading management role for a number of performing arts companies. Joe previously served as News Editor and has remained a contributing author to InPark Magazine since 2011. HIs writing has also appeared in Sound & Communications, LF Examiner, Jim Hill Media, The Planetarian, Behind the Thrills, and MiceChat His blog, ThemedReality.com takes an unconventional look at the attractions industry. Follow on twitter @ThemesRenewed Joe lives in Sacramento, California with his wife, dog, and a ghost.
Share
Facebook
Twitter
Linkedin
Email
Print
WhatsApp
Pinterest
ReddIt
Tumblr
Previous articleDisney Cruise Lines Announces Ship Enhancements, 2016 Ports of Departure
Next articleWicked Cyclone Provides New Twists at Six Flags New England