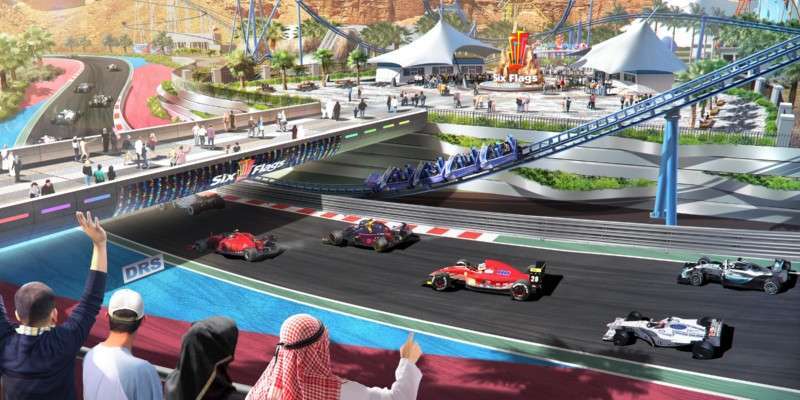 August 26, 2019 — Qiddiya Investment Company (QIC) today unveiled the design for Six Flags Qiddiya, one of the key entertainment facilities in a new city that is being built just outside Riyadh, and is destined to become the Kingdom’s capital of entertainment, sports and the arts.

“Our vision is to make Six Flags Qiddiya a theme park that delivers all the thrills and excitement that audiences from all over the world have come to expect from the Six Flags brand, and to elevate those experiences with authentic themes connected to the location. As a place that will create indelible memories and moments of delight, telling stories that resonate with our guests is a central notion that will be evident throughout Qiddiya,“ said Michael Reininger, Chief Executive Officer of QIC.

Six Flags Qiddiya will be one of the key entertainment features in Qiddiya’s first phase when it opens in 2023. The rides and attractions found in each land have been designed exclusively for Qiddiya and include many that will set world records.

“The Six Flags brand began in 1961 when we opened our first park, Six Flags Over Texas, which was themed according to the six flags that once flew over Texas. At Six Flags Qiddiya, we return to that heritage by creating six immersive lands designed for Saudis of all ages who seek family entertainment experiences steeped in their rich culture and history. We are thrilled to be part of a project of such scale and scope and are proud to celebrate this milestone with Qiddiya,” said David McKillips, President of Six Flags International Development Company.

The Citadel is the central hub of the park. It is covered by a billowing canopy form inspired by traditional Bedouin tents. It holds a variety of shops, cafes and restaurants while transforming into an interactive show space throughout the day. From here, guests can pass through portals to enter each of the themed lands.

The City of Thrills is the embodiment of Saudi Arabia’s Vision 2030; a forward looking, boundary pushing, future city anchored in Arabic design motifs. Here visitors will find Six Flags Qiddiya’s most recognizable and anticipated thrill rides. The Falcon’s Flight, inspired by the Kingdom’s iconic natonal bird is both a symbolic marker of the country’s culture and tradition, will be the longest, tallest and fastest roller coaster in the world, while the Sirocco Tower will break more records with the world’s tallest drop-tower ride.

Discovery Springs reflects Qiddiya’s unique and timeless relationship between the desert and the sea as its collection of rides and experiences play with elements of earth and water. It is an aquatic wonderland of waterfalls, aqueducts and geysers, as well as exotic plants and trees. This oasis offers visitors relief from the summer heat by creating the feel of a dense rainforest in the middle of the desert. Visitors to Discovery Springs will discover a first-of-its-kind interactive ride called the Sea Stallion, where riders are propelled over rivers, behind waterfalls and through trees along a custom-designed course, as they control the speed and acceleration of their serpent.

Steam Town is where the past and future collide in a rugged frontier town that is powered by steam and echoes with screams. Themed around mechanical marvels and a collection of dynamic contraptions, the land’s signature ride is the Iron Rattler Mine Train. On this ride the best elements of a roller coaster are linked to a hydraulic lift which releases passengers into a freefall plunge through a narrow, steam-filled mineshaft.

Other key features include the Steam Town Falls Water Coaster which combines a roller coaster track with a splashing boat ride, a spinning mechanical ride called the Steel Stampede and a custom-themed climbing structure called the Treehouse Trek.

Twilight Gardens is an oversized landscape of the imagination filled with colorful flowers and friendly creatures, all specially designed for younger visitors and their families. This enchanted land’s key features include the Twilight Express Coaster, which takes passengers through a majestic garden, the Critter Chase, an interactive dark ride set in a 3D environment, and the Kaleidoscope hot air balloon ride.

Valley of Fortune is an exciting land of adventure that takes place amidst time-worn architectural ruins of old Arabian masonry, enlivened by the activity and trade of fortune seekers from around the world. This land’s signature attraction is Spitfire, a triple-launch coaster, which will take guests into a sky roll before an acrobatic stall and a breathtaking dive back to the valley floor. Other features of Valley of Fortune include Skywatch, a ride where riders are lifted into the sky, the auto-themed Treasure Trail and the Aeromax, a family plane ride that swings and rotates freely over the park.

Grand Exposition is a celebration of innovation combining the nostalgia of traditional carnival midways with the greatest feats of science and technology such as the Gyrospin Pendulum, which swings riders to record heights. It is also home to Six Flags Qiddiya’s classic and most loved coaster Colossus, a gravity-driven wood-steel hybrid roller coaster which stretches over an 800-metre track. The land also features the Arabian Carousel, where Arabian horses march in a circular parade, the Expo Flyer swinging ride and Automania, with bumper car attractions themed as London cabs.

Joe Kleimanhttp://wwww.themedreality.com
Raised in San Diego on theme parks, zoos, and IMAX films, InPark's Senior Correspondent Joe Kleiman would expand his childhood loves into two decades as a projectionist and theater director within the giant screen industry. In addition to his work in commercial and museum operations, Joe has volunteered his time to animal husbandry at leading facilities in California and Texas and has played a leading management role for a number of performing arts companies. Joe previously served as News Editor and has remained a contributing author to InPark Magazine since 2011. HIs writing has also appeared in Sound & Communications, LF Examiner, Jim Hill Media, The Planetarian, Behind the Thrills, and MiceChat His blog, ThemedReality.com takes an unconventional look at the attractions industry. Follow on twitter @ThemesRenewed Joe lives in Sacramento, California with his wife, dog, and a ghost.
Share
Facebook
Twitter
Linkedin
Email
Print
WhatsApp
Pinterest
ReddIt
Tumblr
Previous articleD23 Expo: Disney redefines EPCOT, showcases new Avengers lands, and announces cruise ships for sea and space
Next articleJRA provides exhibit planning, design, and project management for Toyota Experience Center