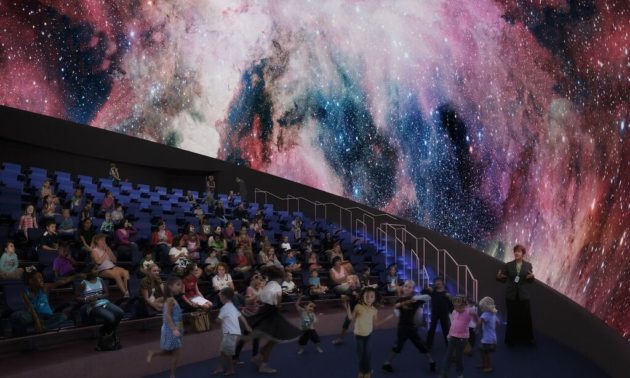 Nashua, NH, USA – After a competitive selection process, the Patricia and Phillip Frost Museum of Science, currently under construction in downtown Miami’s Museum Park, has chosen Sky-Skan, Inc. to provide a complete Definiti 8k 3D digital planetarium and visualization system for the Frost Planetarium, which opens next year.

“Sky-Skan really stood out as a company deeply interested in understanding our goals and in making sure we had the tools to achieve them,” said Brooks Weisblat, Vice President of Technology, Frost Science. “Sky-Skan’s technology for 3D science simulation and show development is of the highest quality, and we’re excited to be working with them.”

The new Frost Planetarium, made possible by a $10 million gift from longtime Miami benefactors Patricia and Phillip Frost, succeeds the renowned Miami Space Transit Planetarium, which closed in late 2015 as part of the museum’s previous location in Coconut Grove. The Frost Planetarium will feature 250 seats on a raked stadium-style platform. Visitors will gaze into an immense hemispherical screen and enjoy guided tours of the sky and universe, as well as immersive shows on a wide range of fascinating science and nature topics.

PREVIEW FROST SCIENCE IN THE PAGES OF INPARK MAGAZINE ISSUE 61

In some shows, visitors will wear 3D glasses, further enhancing the illusion of being immersed in fascinating environments.

Behind the scenes, ultra-high resolution, edge-blended video projectors fed by state-of-the-art graphics computers will deliver forty million pixels to the screen every 1/60th of a second, providing a vivid representation of the great wonders of the universe.

“Our technology has taken decades to perfect  and we are honored to receive a commission to equip a system in one of the world’s most exciting cities,” said Steven Savage, president of Sky-Skan. “Miami has always been a world-class leader in its planetarium programming and this tradition is clearly set to continue,” he added.

The new system will automatically connect to science data repositories and update itself with the latest data about the universe so that repeat visitors will always have something new to see and learn. The installation of the system will include super-bright LED lighting and a powerful 17-channel sound system.

Joe Kleimanhttp://wwww.themedreality.com
Raised in San Diego on theme parks, zoos, and IMAX films, InPark's Senior Correspondent Joe Kleiman would expand his childhood loves into two decades as a projectionist and theater director within the giant screen industry. In addition to his work in commercial and museum operations, Joe has volunteered his time to animal husbandry at leading facilities in California and Texas and has played a leading management role for a number of performing arts companies. Joe previously served as News Editor and has remained a contributing author to InPark Magazine since 2011. HIs writing has also appeared in Sound & Communications, LF Examiner, Jim Hill Media, The Planetarian, Behind the Thrills, and MiceChat His blog, ThemedReality.com takes an unconventional look at the attractions industry. Follow on twitter @ThemesRenewed Joe lives in Sacramento, California with his wife, dog, and a ghost.
Share
Facebook
Twitter
Linkedin
Email
Print
WhatsApp
Pinterest
ReddIt
Tumblr
Previous articleLCI Productions Tells the History of Early Man and Cox’s Cave through Unique AV Installation
Next articleJohn Wiskowski Joins Gateway Ticketing Systems as Customer Service Manager