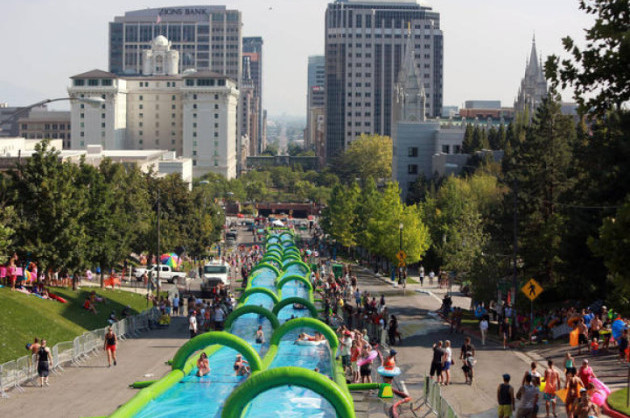 [quote]We spend so much time walking, running, or driving around our cities, but how many times have you been able to say you slid down your city streets?” — Slide the City Founder TR Gourley[/quote]

Salt Lake City, UT, USA — City streets will get a slippery makeover in more than 150 cities around the world when Slide the City goes on tour with 1,000+ feet of padded vinyl. Turning hills into water-sliding thrills is the goal of the event, which was created in an effort to get people outside, having fun, and connecting with their community.

Participants in Slide the City will ride inflatables down a 1,000-ft. water slide. This one-of-a-kind experience will help people “slide into summer,” while supporting a good cause. A portion of the proceeds of each event will benefit a local charity.

The first event of its kind, Slide the City has seen massive growth since it started in 2014. This original concept went viral when the video was released, and this year promises to be bigger, better, and wetter.

“This will be one of the highlights of your year,” said Gourley “Get ready for the slide of your life!”

Slide the City will make its 2015 debut with a World Record Breaking event: longest slide and the most number of sliders, in West Palm Beach, FL on February 14th.

Each rider can purchase a one ride pass, three ride pass, or all-day pass. With over 150 events in the US and Canada, and more than 20 international locations beginning with Japan and Australia as early as March, water slide enthusiasts are sure to find a Slide the City event nearby.

Joe Kleimanhttp://wwww.themedreality.com
Raised in San Diego on theme parks, zoos, and IMAX films, InPark's Senior Correspondent Joe Kleiman would expand his childhood loves into two decades as a projectionist and theater director within the giant screen industry. In addition to his work in commercial and museum operations, Joe has volunteered his time to animal husbandry at leading facilities in California and Texas and has played a leading management role for a number of performing arts companies. Joe previously served as News Editor and has remained a contributing author to InPark Magazine since 2011. HIs writing has also appeared in Sound & Communications, LF Examiner, Jim Hill Media, The Planetarian, Behind the Thrills, and MiceChat His blog, ThemedReality.com takes an unconventional look at the attractions industry. Follow on twitter @ThemesRenewed Joe lives in Sacramento, California with his wife, dog, and a ghost.
Share
Facebook
Twitter
Linkedin
Email
Print
WhatsApp
Pinterest
ReddIt
Tumblr
Previous article
Gateway Ticketing Systems’ Galaxy POS Solution Takes Root at Atlanta Botanical Garden
Next article
John Robinett and Linda Cheu of AECOM to Discuss Global Economic Trends at TEA Summit