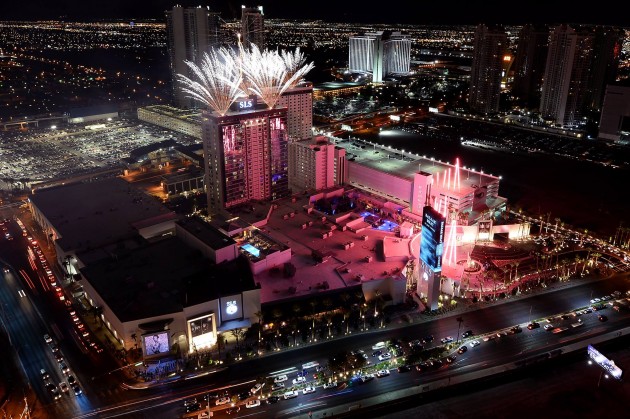 [quote]This is the beginning of a new era for The Strip.  We are thrilled to throw open our doors and show the world what we’ve been working on for the past several years. It feels good to be back in the former Sahara space, and we look forward to creating new, legendary memories as SLS Las Vegas.” — Sam Nazarian, Founder, Chairman and CEO, sbe[/quote]

Las Vegas, NV, USA (August 23, 2014) / PR Newswire / — SLS Las Vegas, the culmination of a years-long, $415 million dollar renovation of the legendary Sahara, opened its doors today welcoming the public back to the North end of the iconic Las Vegas Strip.  A fully-integrated, entertainment-driven resort and casino with more than 1,600 guest rooms and suites, SLS Las Vegas features a curated collection of hospitality industry trendsetter sbe’s most beloved brands, refined and reinvigorated for Las Vegas as well as original concepts all set in an atmosphere that’s both dynamic and approachable.

Destined to become one of the most energetic hotels on the Las Vegas Strip, SLS is high-style collaboration between sbe Founder and Chairman Sam Nazarian, James Beard award-winning chef José Andrés and design visionary Phillippe Starck in collaboration with globally acclaimed architectural firm Gensler.  Highlights of the property include Andres’ Bazaar Meat, a twist on his hugely popular concept Bazaar; the second location of The Sayers Club, one of Los Angeles’ best-loved live music venues; celebrated restaurants Katsuya by Starck, Umami Burger, Beer Garden & Sports Book, Cleo and The Griddle Cafe; an exclusive partnership with retailer Fred Segal and one of The Strip’s most exhilarating nightclub, the 20,000 square-foot LiFE, a venue designed, with sbe’s myriad years creating superior nightlife venues, to maximize the club-going experience.

“We’re incredibly proud of our partners and our approachable mix of amenities,” added President and COO of SLS Las Vegas, Rob Oseland. “As a result, we have a property that speaks to everything that the 40 million tourists who find their way to Vegas every year expect while at the same time stays approachable and welcoming to the vibrant community of Southern Nevada.”

The resort celebrated its opening with a star-studded preview party with guests including, actors Aaron Paul, Emile Hirsch and Kellan Lutz, model Dita Von Teese, UFC star Chuck Liddell, and actress Brittany Snow. Partygoers enjoyed tastes of the resort’s signature food and beverage offerings and live performances from rock legend Lenny Kravitz, who designed a handful of the resort’s top tier suites, and rising star artists including Iggy Azalea, Rita Ora, JoJo and Jhené Aiko. As the clock struck midnight, amid a display of fireworks, the SLS team led by Sam Nazarian officially cut the ribbon and escorted the first guests to the gaming floor.

“This is a very exciting day for us,” said Nazarian. “SLS Las Vegas is the embodiment of a dream that began seven years ago when we purchased the Sahara.  To see this legendary property come back to life in the vision that we created all those years ago is nothing short of incredible and I am grateful for all of our visionary partners and the incredible community support we have received during this transformation.  We invite everyone to be legendary and join us at SLS Las Vegas.”

Joe Kleimanhttp://wwww.themedreality.com
Raised in San Diego on theme parks, zoos, and IMAX films, InPark's Senior Correspondent Joe Kleiman would expand his childhood loves into two decades as a projectionist and theater director within the giant screen industry. In addition to his work in commercial and museum operations, Joe has volunteered his time to animal husbandry at leading facilities in California and Texas and has played a leading management role for a number of performing arts companies. Joe previously served as News Editor and has remained a contributing author to InPark Magazine since 2011. HIs writing has also appeared in Sound & Communications, LF Examiner, Jim Hill Media, The Planetarian, Behind the Thrills, and MiceChat His blog, ThemedReality.com takes an unconventional look at the attractions industry. Follow on twitter @ThemesRenewed Joe lives in Sacramento, California with his wife, dog, and a ghost.
Share
Facebook
Twitter
Linkedin
Email
Print
WhatsApp
Pinterest
ReddIt
Tumblr
Previous articleInception and Reconception: Pat Scanlon on the Thea Awards and the PCC
Next articleKings Dominion Announces Major Expansion of WaterWorks Waterpark