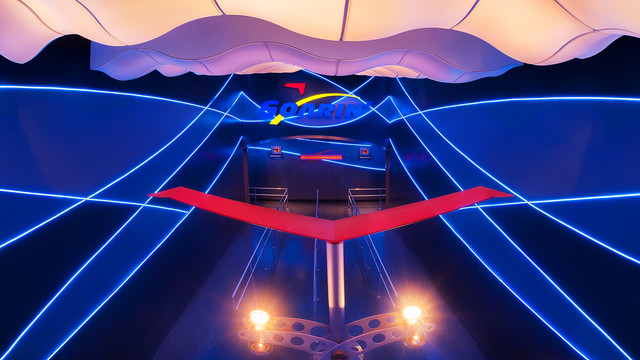 Anaheim, CA and Lake Buena Vista, FL, USA – Soarin’ Around the World, a new experience based on the original Soarin’ Over California attraction at Disney California Adventure, now takes guests on a global journey from both the Disneyland Resort and Epcot at the Walt Disney World Resort.

The latest airborne adventure offers breathtaking scenes from locations around the world: over the snowy peak of the Matterhorn, along the Great Wall of China, through the majestic buttes of Monument Valley, hopping over the top of the Great Pyramids of Egypt, and across spectacular Sydney Harbour.

The new experience premiered just after the attraction’s world debut at the Shanghai Disney Resort.

As the next generation of Soarin’, Soarin’ Around the World is an exhilarating aerial adventure that immerses guests in a multi-sensory experience, complete with stunning sights, spectacular sounds and even subtle scents.

Guests don’t just see these gorgeous landscapes with their eyes. They use all their senses to feel, smell and hear the world through this thrilling experience that could only be created by Disney.

Employing high-definition, laser-projected footage and innovative motion-based ride technology, all developed by Walt Disney Imagineering, Soarin’ Around the World lifts 87 guests at a time 40 feet aloft into an 80-foot projection screen dome. The effect is that guests’ entire field of vision is filled with panoramic beauty, giving them the sensation that they are actually flying over the globe’s grand landmarks, natural and manmade.

Soarin’ Around the World is also enhanced by its majestic musical score, composed by Bruce Broughton, based on the original Soarin’ score by the late film and television composer Jerry Goldsmith, and performed by the London Studio Orchestra.

In Shanghai the attraction goes by a different name, Soaring Over the Horizon, to better fit its location in Adventure Isle at Shanghai Disneyland with its spirit of exploration and discovery.

Joe Kleimanhttp://wwww.themedreality.com
Raised in San Diego on theme parks, zoos, and IMAX films, Joe Kleiman would expand his childhood loves into two decades as a projectionist and theater director within the giant screen industry. In addition to his work in commercial and museum operations, Joe has volunteered his time to animal husbandry at leading facilities in California and Texas and has played a leading management role for a number of performing arts companies. Joe has been News Editor and contributing author to InPark Magazine since 2011. HIs writing has also appeared in Sound & Communications, LF Examiner, Jim Hill Media, and MiceChat. His blog, ThemedReality.com takes an unconventional look at the attractions industry. Follow on twitter @ThemesRenewed Joe lives in Sacramento, California with his fiancé, two dogs, and a ghost.
Share
Facebook
Twitter
Linkedin
Email
Print
WhatsApp
Pinterest
ReddIt
Tumblr
Previous articleVIDEO: The Making of Shanghai Disneyland
Next articleWhiteWater offers webinar