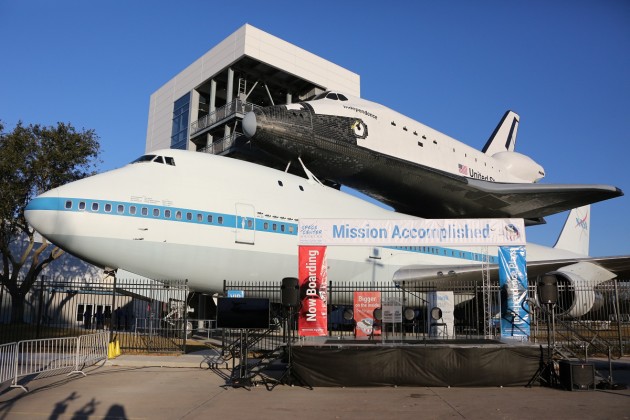 Years in the making, the day, themed “Mission Accomplished,” welcomed visitors from all over the world to be a part of the historic opening. For the first time, the nonprofit opened the eight-story-tall multiple-exhibit complex, featuring the first shuttle carrier aircraft NASA 905 and the high-fidelity shuttle replica Independence.“It was an unforgettable day for the world and our center,” said Richard E. Allen Jr., president and CEO of the educationally focused nonprofit museum, Space Center Houston. “Visitors celebrated the historic day and the launch of the world-class exhibit symbolizing one of America’s greatest accomplishments in space exploration.” The Independence replica space shuttle was originally on display at the Kennedy Space Center Visitor Complex and relocated by barge to Space Center Houston upon construction of the Space Shuttle Atlantis exhibit in Florida. Set around the magnificent new exhibit complex, the day kicked off with an opening ceremony and a T-10 countdown to celebrate the monumental day. Visitors heard from NASA Johnson Space Center Director and astronaut Dr. Ellen Ochoa, who was integral in obtaining the extraordinary vehicles featured in the international landmark. Laura Husband, daughter of the late astronaut Col. Rick Husband, sang the National Anthem while RE/MAX skydivers landed at the event and the U.S. Coast Guard Ceremonial Honor Guard presented the colors. Space Center Houston President and CEO Richard Allen told the crowd about the ambitious project and why bringing such a grand exhibit to life was important to the nonprofit. U.S. Rep. Brian Babin joined the ceremony and presented Space Center Houston with a flag flown over the U.S. Capitol Building. John Elbon, vice president and general manager of Boeing Space Exploration, discussed the importance of Independence Plaza and the significance of the shuttle carrier aircraft program to the Space Shuttle Program.

The excitement filled the air when visitors took their first steps inside the exhibit complex and entered both the shuttle carrier aircraft NASA 905 and the high-fidelity shuttle replica Independence. The action continued throughout the day with activities for the whole family. Visitors watched a space adventure during a special viewing of the new animated movie “Capture the Flag;” participated in interactive Pop-Up Science Labs; and had fun with hands-on space-related educational activities. People of all generations enjoyed a special opportunity to have Lunch with an Astronaut and meet space veterans Jerry Ross and Ken Cameron. Visitors took home the ultimate souvenir during astronaut autograph signings with Anne McClain, Ken Cameron and Jerry Ross, who also signed copies of his book “Spacewalker: My Journey in Space and Faith as NASA Record-Setting Frequent Flyer.” Unlike anything else in the world, Independence Plaza immerses visitors in the science and history of the shuttle era with hands-on exhibit displays inside an unprecedented interactive experience. It honors those who designed, built and flew in America’s Space Shuttle Program by recounting stories from astronauts, engineers and pilots. Visitors learn about the key role NASA Johnson Space Center played in the shuttle’s development and see firsthand the future of space exploration through the interactive multi-media educational displays.

To visit Independence Plaza, visitors who have purchased an admission ticket can reserve a free timed ticket to view the smaller shuttle, enter the larger plane via a first-come, first-served line or walk around the plaza without waiting in lines.  To learn more about timed tickets, visit spacecenter.org/timed-ticketing.