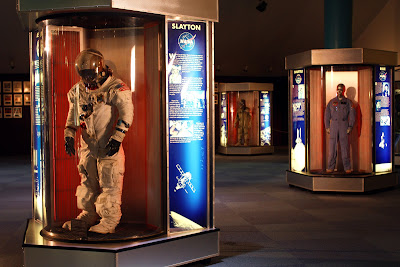 According to Scott, his lifelong dream was to visit NASA. “I never imagined that I would attend as a guest to support science careers and education,” Scott said. “How cool is that?”

The Diva Design Series, an all-inclusive program sponsored by Schlumberger, was developed to promote interest among middle school girls in science, technology, engineering and math (STEM) education. The students were given time sheets and task lists as well as deadlines upon arrival and were rewarded with fashion wages at the end of their work day.

“The program does more than inspire these young ladies in science careers,” said Dr. Melanie Johnson, Director of Education for Space Center Houston, “it also gives them the opportunity to integrate soft skills such as time management and work ethics.”

The first event of the three month series allowed the students to participate as space suit engineers for the day, while learning technical and practical applications. The middle school students, who represent the Aldine, La Marque and Houston independent school districts, will attend remaining sessions on Space Culinary Arts in April and the Psychological Effects of Colors in May.

Research reveals that there is a shortage of women in STEM careers. According to a 2010 study by the American Association of University Women, “girls are less likely than boys to interpret their academic success in math and science as an indication that they have the skills necessary to become successful engineers, physicists, or computer scientists.”

Joe Kleimanhttp://wwww.themedreality.com
Raised in San Diego on theme parks, zoos, and IMAX films, Joe Kleiman would expand his childhood loves into two decades as a projectionist and theater director within the giant screen industry. In addition to his work in commercial and museum operations, Joe has volunteered his time to animal husbandry at leading facilities in California and Texas and has played a leading management role for a number of performing arts companies. Joe has been News Editor and contributing author to InPark Magazine since 2011. HIs writing has also appeared in Sound & Communications, LF Examiner, Jim Hill Media, and MiceChat. His blog, ThemedReality.com takes an unconventional look at the attractions industry. Follow on twitter @ThemesRenewed Joe lives in Sacramento, California with his fiancé, two dogs, and a ghost.
Share
Facebook
Twitter
Linkedin
Email
Print
WhatsApp
Pinterest
ReddIt
Tumblr
Previous articleOld Town Kissimmee Salutes American Heroes
Next articleDisney Imagineer Alfredo Ayala to Headline Hispanicize 2012