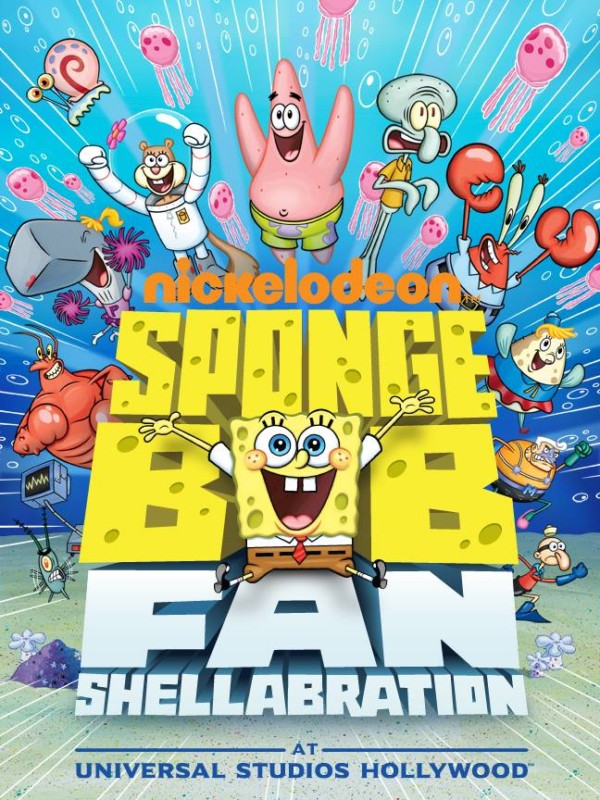 The two-day Shellabration event will take place from 9:00 a.m. to 7:00 p.m. and include a live script-read of a SpongeBob SquarePants episode featuring the series voice cast; a screening of the winning videos from the inaugural SpongeBob SquareShorts: Original Fan Tributes competition; an exhibit of fan-created SpongeBob SquarePants inspired art; a first of its kind SpongeBob Toyota concept car; a live musical performance by Tom Kenny (voice of SpongeBob) and more.

Admission to the SpongeBob Fan Shellabration is included in the price of admission to Universal Studios Hollywood.

“SpongeBob SquarePants is one of the most iconic characters of our generation and is beloved by fans around the world,” said Pam Kaufman, Chief Marketing Officer, Nickelodeon Group. “We are thrilled to be partnering with Universal Studios Hollywood to give the fans an amazing, one-of-a-kind SpongeBob SquarePants experience.”

“SpongeBob SquarePants is an endearing character at Universal Studios Hollywood that entertains our guests visiting from around the world,” said Xiomara Wiley, Senior Vice President, Marketing and Sales, Universal Studios Hollywood. “Serving as the premier location for this first-ever Shellabration fan event in collaboration with Nickelodeon enables us to bring this lovable character to life in a variety of unexpected and interactive ways.”

At Nickelodeon’s inaugural SpongeBob Fan Shellabration event at Universal Studios Hollywood, guests will be able to:

Since its launch in July 1999, SpongeBob SquarePants has emerged as a pop culture phenomenon.  The series has been the most-watched animated program with kids 2-11 for more than 12 consecutive years, and over the past several years, it has averaged more than 100,000,000 total viewers every quarter across all Nickelodeon networks.  As the most widely distributed property in Viacom history, SpongeBob is seen in over 170 countries and translated in more than 35 languages.

Joe Kleimanhttp://wwww.themedreality.com
Raised in San Diego on theme parks, zoos, and IMAX films, InPark's Senior Correspondent Joe Kleiman would expand his childhood loves into two decades as a projectionist and theater director within the giant screen industry. In addition to his work in commercial and museum operations, Joe has volunteered his time to animal husbandry at leading facilities in California and Texas and has played a leading management role for a number of performing arts companies. Joe previously served as News Editor and has remained a contributing author to InPark Magazine since 2011. HIs writing has also appeared in Sound & Communications, LF Examiner, Jim Hill Media, The Planetarian, Behind the Thrills, and MiceChat His blog, ThemedReality.com takes an unconventional look at the attractions industry. Follow on twitter @ThemesRenewed Joe lives in Sacramento, California with his wife, dog, and a ghost.
Share
Facebook
Twitter
Linkedin
Email
Print
WhatsApp
Pinterest
ReddIt
Tumblr
Previous article
VIDEO: Scotland’s Only IMAX Film Theater Prepares to Go Digital
Next article
Record Breaking Rollercoaster Coming to Six Flags Great America in 2014