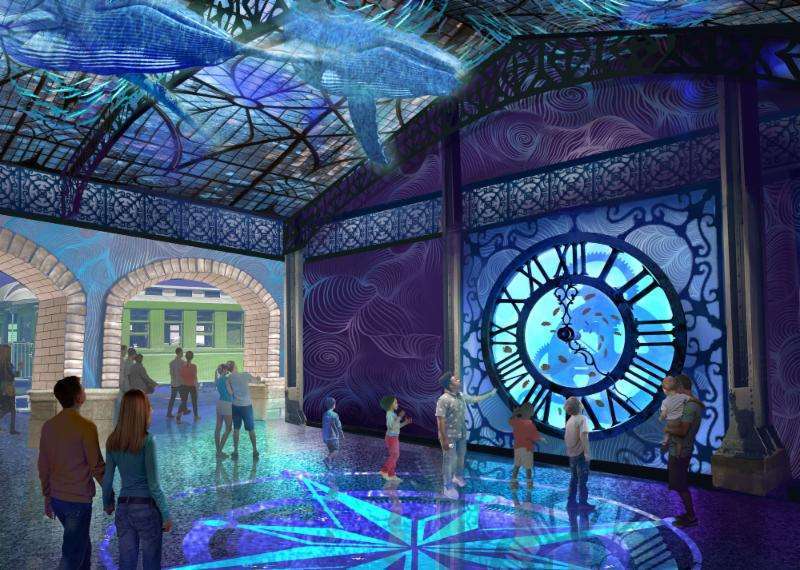 The St. Louis Aquarium at Union Station will open on Christmas Day, December 25, 2019.

Special Christmas Day hours will be from noon until 6 p.m.

“We are thrilled to be able to invite the public into our new home for the holidays,” said Tami Brown, executive director of the St. Louis Aquarium at Union Station. “This is a great way to start a new family tradition by experiencing the wonders of aquatic life at the aquarium.”

Timed admission tickets are now on sale at www.stlouisaquarium.com.

General admission tickets are $25 for adults and $18 for children ages 3 to 13. Children under the age of three are free. Tickets will allow access to all of the Aquarium’s galleries, exhibits and interactive experiences. The St. Louis Aquarium at Union Station will offer timed ticketing that will allow guests to avoid waiting in line. A limited number of same-day passes also will be available for purchase every day on site.

More information about Annual Passes and Combo Tickets that include admission to Union Station’s other attractions — the St. Louis Wheel, Carousel, Mini-Golf, Ropes Course and A-Maze-Ing Discoveries Mirror Maze — is available online at https://www.stlouisaquarium.com/tickets. St. Louis Union Station gift cards also can be purchased and loaded with any amount at the Aquarium’s retail store. Gift cards can be used for admission to any of the attractions at Union Station or in any retail location.

The St. Louis Aquarium at Union Station is the centerpiece of a $187 million family entertainment complex in downtown St. Louis. The Aquarium and other attractions — including the 200-foot St. Louis Wheel observation wheel — are housed at the 500,000-square-foot National Historic Landmark train shed at Union Station, which originally opened in 1894 as the biggest and busiest train terminal in the nation.

The 120,000-square-foot aquarium covers two stories and includes environments filled with more than a million gallons of water. The aquarium will include one-of-a-kind exhibits featuring more than 13,000 aquatic animals from fresh water and marine environments around the world. It will bring together state-of-the-art technology, animal care, education and conservation with the excitement of aquatic creatures.

Visitors will enter the Aquarium via a 3-D virtual reality train ride that honors the history of St. Louis Union Station’s railroad past. The multimedia train delivers guests to an area that explores the confluence of the Mississippi and Missouri rivers. They will learn about the fish that inhabit the great rivers of America and explore the Global Rivers area to see fresh water species from around the world. Playful otters — named Sawyer, Finn and Thatcher — piranhas and doctor fish are just some of the highlights.

Lord Stanley, the rare blue lobster named for the NHL’s Stanley Cup and St. Louis Blues’ championship, will live in his own habitat with a hockey theme.

The Shark Canyon exhibit will offer views of 60 sharks and rays in a 250,000-gallon environment with acrylic J-walls that arch high over the heads of visitors. Divers will interact with guests from inside the exhibit. The Deep section will take visitors on a journey through the depths of the world’s oceans to meet the animals that live there, including Jellyfish and a Giant Pacific Octopus.

The second floor also will include a variety of interactive exhibits and touch tanks to create a hands-on and hands-wet experience.

“Visitors will leave the St. Louis Aquarium at Union Station with wet hands and a greater understanding of the planet’s rivers, oceans and aquatic life,” said Brown. “They will be able to feed turtles and stingrays and interact with invertebrate animals in our touch tanks. Our staff also will have a variety of other animals such as sloths and birds to explore with the guests.”

Opening along with the Aquarium is the St, Louis Aquarium Foundation’s Conservation and Education Center (CEC). The Foundation is the Aquarium’s non-profit partner, working to provide access to the Aquarium to underserved students and communities and to offer educational programs and field trip opportunities. The Foundation is also an advocate for water stewardship.The CEC is filled with hands-on exhibits and an art installation created from recycled plastic water bottles.

OPERATOR: ZoOceanarium Group. The company specializes in developing and operating a new generation of aquariums and zoological facilities that emphasize excellent animal care and well-being and that create unique opportunities for people to appreciate and learn about animals through once-in-a-lifetime experiences.

Joe Kleimanhttp://wwww.themedreality.com
Raised in San Diego on theme parks, zoos, and IMAX films, InPark's Senior Correspondent Joe Kleiman would expand his childhood loves into two decades as a projectionist and theater director within the giant screen industry. In addition to his work in commercial and museum operations, Joe has volunteered his time to animal husbandry at leading facilities in California and Texas and has played a leading management role for a number of performing arts companies. Joe previously served as News Editor and has remained a contributing author to InPark Magazine since 2011. HIs writing has also appeared in Sound & Communications, LF Examiner, Jim Hill Media, The Planetarian, Behind the Thrills, and MiceChat His blog, ThemedReality.com takes an unconventional look at the attractions industry. Follow on twitter @ThemesRenewed Joe lives in Sacramento, California with his wife, dog, and a ghost.
Share
Facebook
Twitter
Linkedin
Email
Print
WhatsApp
Pinterest
ReddIt
Tumblr
Previous articleDimitri Kerkentzes named Secretary General of the Bureau International des Expositions (BIE)
Next articleRaising the standards of immersive storytelling: Disney opens Star Wars: Rise of the Resistance in Florida