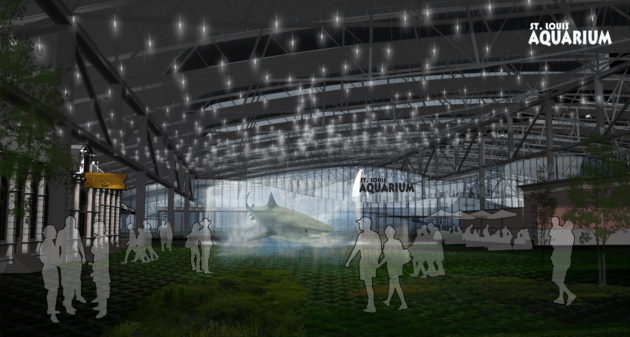 Construction is planned to begin in fall 2016 with an anticipated completion in fall 2018.

“All of us at LHM are excited to bring this highly anticipated attraction to St. Louis,” says Bob O’Loughlin, Chairman and Chief Executive Officer, Lodging Hospitality Management and owner of St. Louis Union Station.  “The St. Louis Aquarium will anchor the development that will transform St. Louis Union Station and reposition it as a family attraction destination similar to Chicago’s Navy Pier.” 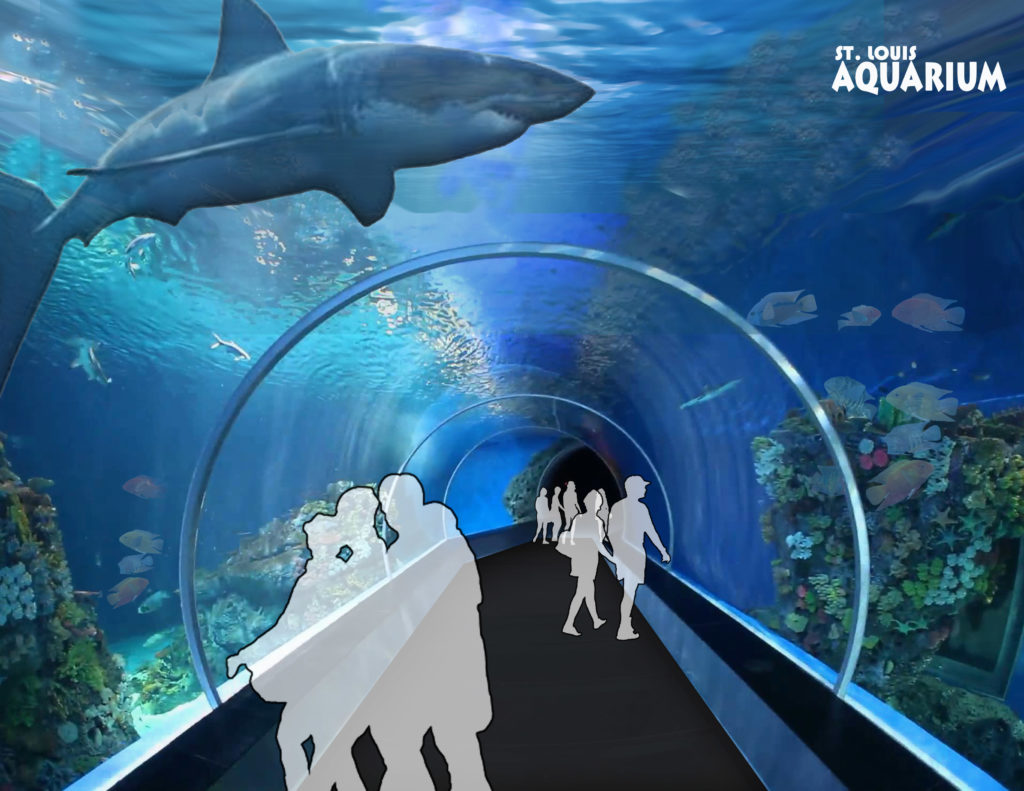 The 75,000-square-foot St. Louis Aquarium will be located in the former mall area within St. Louis Union Station. The $45 million attraction will feature one-of-a-kind exhibits and tanks with one million gallons of water housing thousands of aquatic species.

A shark tank holding one of the largest collections of sharks in the Midwest will be a highlight of the new attraction. The exhibit will feature a Shark Bridge, a unique V-shaped rope bridge that will suspend visitors just inches above the 385,000-gallon shark-filled tank.  For guests brave enough to walk across, the Shark Bridge will offer a thrilling vantage point above the sharks, stingrays and hundreds of fish. 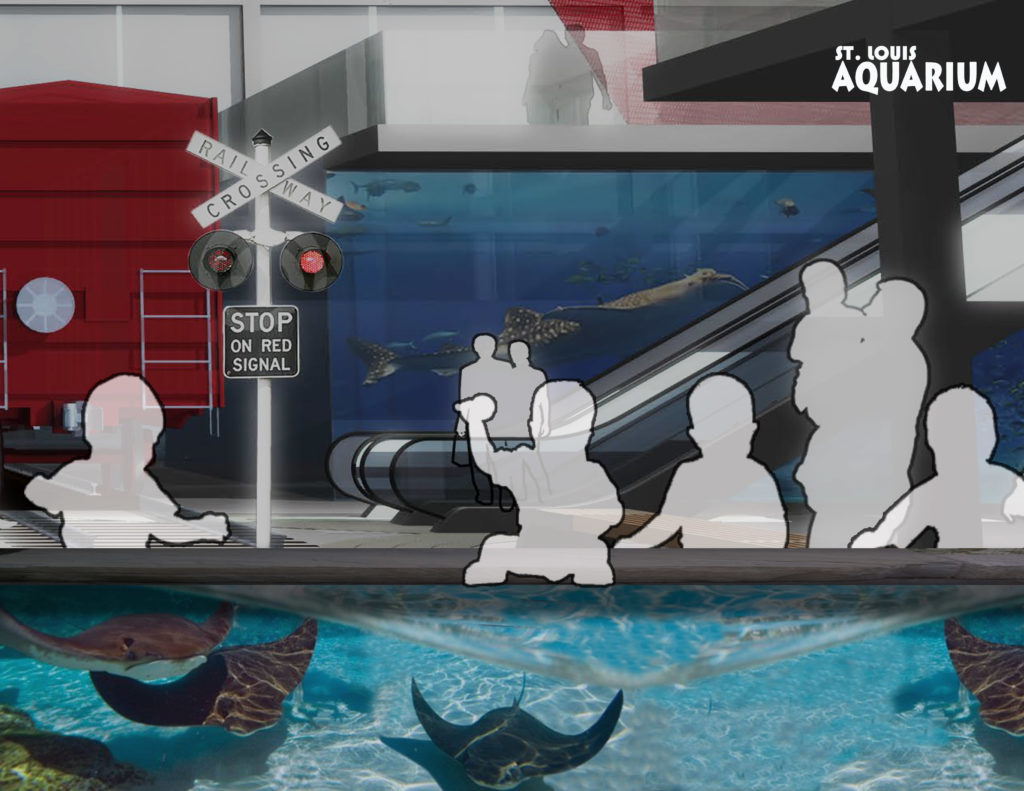 The attraction will be open 365 days a year from 9 a.m. to 7 p.m.  One million visitors are expected annually.

The St. Louis Aquarium will be an accredited member of the Association of Zoos and Aquariums (AZA) which holds members to the highest standards in animal care and exhibition.  The facility will employ an animal husbandry team of marine biologists and aquarists responsible for the long-term care of the animals in the exhibit as well as overseeing water chemistry, animal nutrition, veterinary care, education, staffing and safety.

The aquarium will provide an exceptional educational experience for school groups and be an entertainment destination for local and out-of-town visitors. An 8,500-square-foot private event space will feature the Shark Tank as a backdrop for weddings, social events and corporate parties. 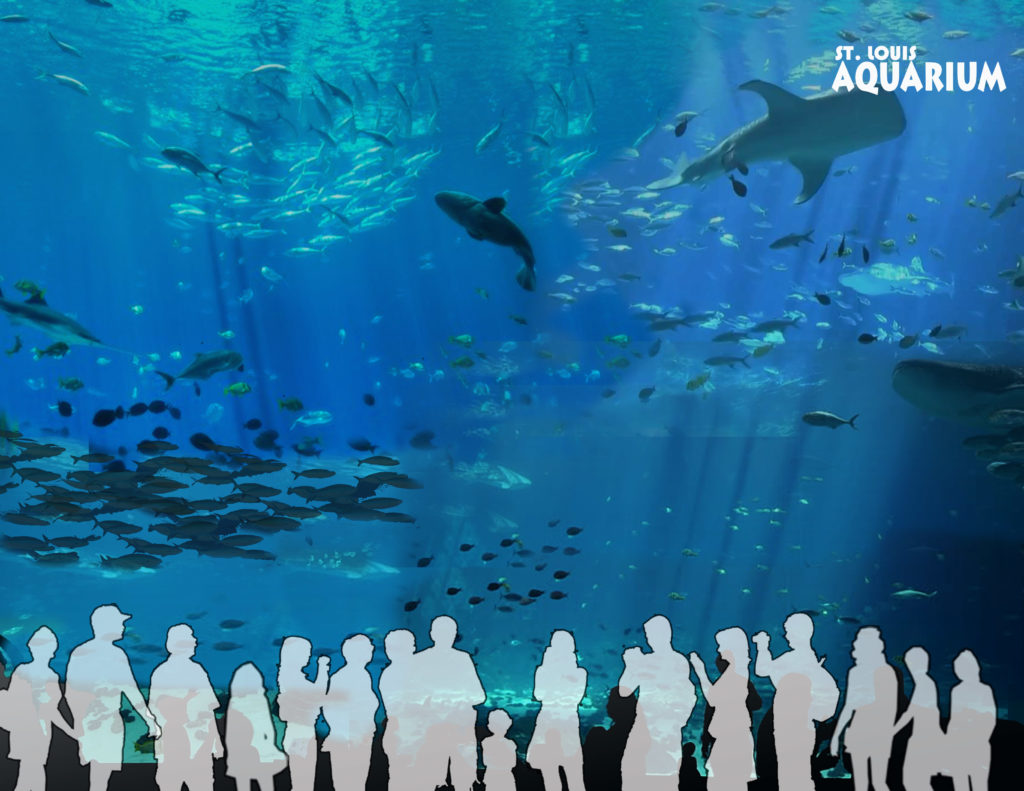 The St. Louis Aquarium will be part of a $70 million family entertainment complex located at St. Louis Union Station.  Other components will include the previously announced St Louis Wheel, a 200-foot-high observation wheel with 30 fully enclosed, climate-controlled and ADA-compliant gondolas that seat up to six adults each. Wheel passengers will take three to four rotations high over the St. Louis skyline during the 10-to-12-minute ride. The St. Louis Wheel will be a new iconic attraction on the St. Louis skyline and will be operational every day of the year.

Other phases of the entertainment complex at St. Louis Union Station are underway in an area beneath the historic train shed that will be known as The Train Park. The Train Park will feature food and beverage concessions served out of train cars and shipping containers, the Fire & Light Show at the Lake, the St. Louis Wheel, the Hard Rock Café and Landry’s restaurants, and new retail and family attractions.

The first phase of development — the Fire & Light Show at the Lake — will open by November 2016.  The show emanates from nine fire pods submerged in the watery pool. Tube lights, hung from trees in the Train Park, and a light show projected onto the ceiling panels of the train shed above the lake, will create a display synchronized to music on view every 30-minutes on the hour.

A new boardwalk around the lake will allow guests to stroll completely around the water and connect to both the Hard Rock Café and Landry’s restaurants.  A cantilevered net lounge will be installed between the restaurants where guests can relax in a hammock-style lounge that hovers above the lake to view the Fire & Light Show.

The Train Park and Fire & Light Show are being created by Groundswell Design of Philadelphia. The company recently completed the popular Spruce Street Harbor Park in Philadelphia. That attraction was recently named in the national media as one of the best places to visit in Philadelphia and has become a popular gathering space for locals and visitors alike with floating gardens, colorful hammocks and food and drink from local restaurants.

Enhancements also are continuing at the St. Louis Union Station Hotel which will add 32 new hotel rooms beneath the clock tower section on the Market Street side of the building’s northeast corner. Construction on the rooms will start in January 2017 with completion by fall 2017. The hotel currently offers 539 rooms and will increase to 571 rooms when the $5.5 million project is completed.

The hotel also will add 15,636 square feet of new meeting space by expanding the Midway east to 18th Street. Six new breakout rooms ranging from 1,600 to 2,835 square feet will be added along with another 8,700 square feet of flexible event space created with one of the shark tanks as a backdrop at the cost of $3.5 million. Construction on the meeting space will begin in January 2017 with completion by fall 2017.

Joe Kleimanhttp://wwww.themedreality.com
Raised in San Diego on theme parks, zoos, and IMAX films, InPark's Senior Correspondent Joe Kleiman would expand his childhood loves into two decades as a projectionist and theater director within the giant screen industry. In addition to his work in commercial and museum operations, Joe has volunteered his time to animal husbandry at leading facilities in California and Texas and has played a leading management role for a number of performing arts companies. Joe previously served as News Editor and has remained a contributing author to InPark Magazine since 2011. HIs writing has also appeared in Sound & Communications, LF Examiner, Jim Hill Media, The Planetarian, Behind the Thrills, and MiceChat His blog, ThemedReality.com takes an unconventional look at the attractions industry. Follow on twitter @ThemesRenewed Joe lives in Sacramento, California with his wife, dog, and a ghost.
Share
Facebook
Twitter
Linkedin
Email
Print
WhatsApp
Pinterest
ReddIt
Tumblr
Previous articleIssue 63: Technology 2016
Next articleHettema Group Trasforms LA’s Union Station into 360 Degree Multimedia Experience