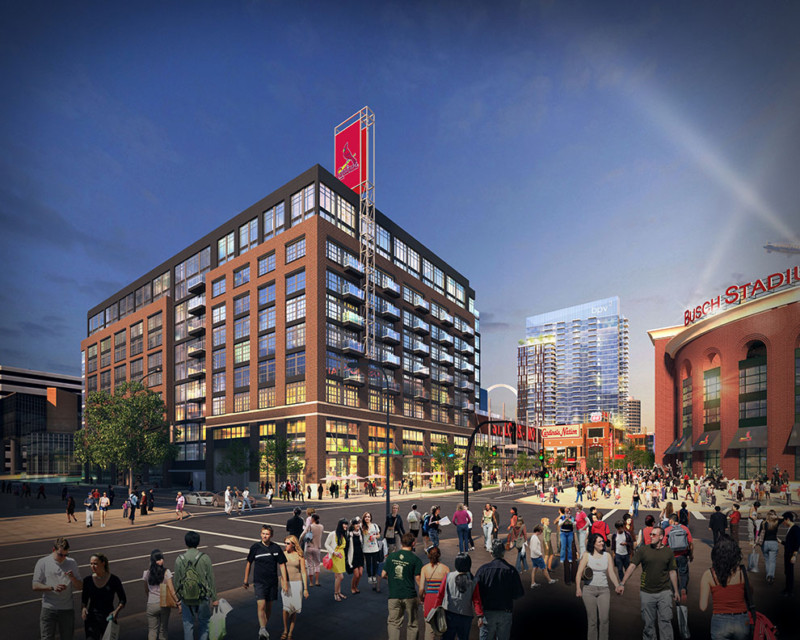 The St. Louis Cardinals announced plans for a $220 million, 550,000 square foot second phase of Ballpark Village which will include the construction of a 29-story luxury high-rise residential tower, the first new Class-A office building built in downtown St. Louis in nearly thirty years, and additional retail, restaurant and entertainment space.

“We are very excited about the second phase of Ballpark Village,” said Bill DeWitt III, President of the St. Louis Cardinals. “Our vision of a mixed-use neighborhood where people live, work and play will become a reality. This is a real game-changer for the city of St. Louis and the state of Missouri.”

The second phase of Ballpark Village will complete a full build-out of Clark Street with a 29-story glass and steel residential apartment tower on the east end, and a large Class-A office building on the west end, as well as additional retail and entertainment in between, transforming Clark Street into one of the most unique city streets in all of major league sports.

The residential apartment tower will be a modern, 29-story, 230 foot tall, luxury high-rise apartment building at the corner of Clark and Broadway that will offer views of the Gateway Arch, the Mississippi River, the St. Louis skyline, and unobstructed views directly into Busch Stadium.

The Class A office building at the corner of Clark and 8th Street will sit right across from the bronze statues on the NW corner of Busch Stadium, and will also include structured parking below, and street level retail and restaurants. It will be the first “new construction” office building built in downtown St. Louis in more than a generation (Metropolitan Square opened in 1989).

Also in Phase II will be a signature two-story retail marketplace and entertainment venue overlooking the existing Busch II Field, the signature “open space” of Ballpark Village. The marketplace will include diverse food options and other amenities to support the new office and residential tenants in the project.

The bill being filed today seeks approval from the city of St. Louis to amend the existing development agreement that enabled the first phase of Ballpark Village. With approval of a short amendment, the development team will have the green light to initiate a second phase that is substantially more ambitious than the highly successful 100,000 square foot, $100 million first-phase that opened in the spring of 2014.

In addition to generating revenue to support the expansion of Ballpark Village, the second phase is expected to generate millions in additional tax revenue for the city of St. Louis, the St. Louis Public School District, and the state of Missouri.

“The Cardinals have built a world-class franchise, a stellar team, and an incredible fan experience, bolstered by Ballpark Village. Phase II marks another strong investment by the Cardinals and demonstrates their commitment to the City of St. Louis,” said Francis G. Slay, the Mayor of St. Louis. “The growing footprint of this top-notch, regional entertainment destination will put more people to work and give more people another place to play Downtown. I am excited to see the Cardinals add another quality project to the building boom that’s happening throughout our City.”

“The men and women of the skilled trades took tremendous pride in building Busch Stadium and Ballpark Village,” said Jeff Aboussie, the former Secretary Treasurer of the St. Louis Building Trades Council. “Big projects like this are about more than just creating jobs, they are about providing an opportunity to develop a career in a highly skilled trade, and they strengthen our community thanks to a strong focus on construction workforce inclusion.”

Ballpark Village Phase 1 exceeded the diversity and inclusion participation goals established by the city of St. Louis, with more than 26% of the construction work on the core and shell being done by certified minority contractors (MBEs) and over 8% of work conducted by women owned contracting firms (WBEs).

“While we exceeded all of our diversity and inclusion goals with the construction of the first phase of Ballpark Village, we intend to take it to a higher level with the next phase,” said Zed Smith, Chairman of the Ballpark Village Community Inclusion Committee. “It is very important to us to ensure that our entire community benefits from the investments we are making in our urban core.”

Within the seven-page piece of legislation that is being introduced today, the Ballpark Village development team has included language to amend the development agreement to require additional inclusion provisions consistent with what they voluntarily undertook in phase 1 in order to raise the standards for racial and gender equity in local construction.

Ballpark Village has been the model we have encouraged others to follow, a proven way to help create an inclusive hiring process,” said Michael Holmes, Executive Director of the St. Louis Agency on Training and Employment (SLATE). “We have encouraged other businesses to follow their lead. Their approach enabled them to achieve a level of workforce diversity that we rarely see in similar projects.”

Ballpark Village was the first project of its kind in the St. Louis region in which St. Louis City’s employment and training agency (SLATE) established an on-site office. Staff there assisted with the hiring of all employees throughout the development, ensuring that minorities and City residents had equal access to jobs and were fairly represented within the workforce.

“The expansion of Ballpark Village will have a very positive impact on downtown, just like the first phase did,” said Missy Kelley, Chief Executive Officer of Downtown STL. “It is particularly exciting to see both high-end, luxury residential and the Class-A office space coming downtown as we need more of both of these types of investments to continue to strengthen the heart of our region.”

Plans call for construction to get underway during the second half of 2017. While some areas might open in 2018, the entire second phase of Ballpark Village should be finished by 2019.

The construction of Ballpark Village represents the next step in the Cardinals’ vision for downtown St. Louis that began with the opening of the new $411 million privately-financed Busch Stadium in 2006. Located on 10-acres north of Busch Stadium, Ballpark Village is the first master-planned development designed around a new Major League Ballpark.

Joe Kleimanhttp://wwww.themedreality.com
Raised in San Diego on theme parks, zoos, and IMAX films, InPark's Senior Correspondent Joe Kleiman would expand his childhood loves into two decades as a projectionist and theater director within the giant screen industry. In addition to his work in commercial and museum operations, Joe has volunteered his time to animal husbandry at leading facilities in California and Texas and has played a leading management role for a number of performing arts companies. Joe previously served as News Editor and has remained a contributing author to InPark Magazine since 2011. HIs writing has also appeared in Sound & Communications, LF Examiner, Jim Hill Media, The Planetarian, Behind the Thrills, and MiceChat His blog, ThemedReality.com takes an unconventional look at the attractions industry. Follow on twitter @ThemesRenewed Joe lives in Sacramento, California with his wife, dog, and a ghost.
Share
Facebook
Twitter
Linkedin
Email
Print
WhatsApp
Pinterest
ReddIt
Tumblr
Previous articleElectrosonic Integrates Fun Into New SPAM Museum
Next articleStefan Guttensohn Joins Nolan Heimann LLP’s Corporate & Securities Practice