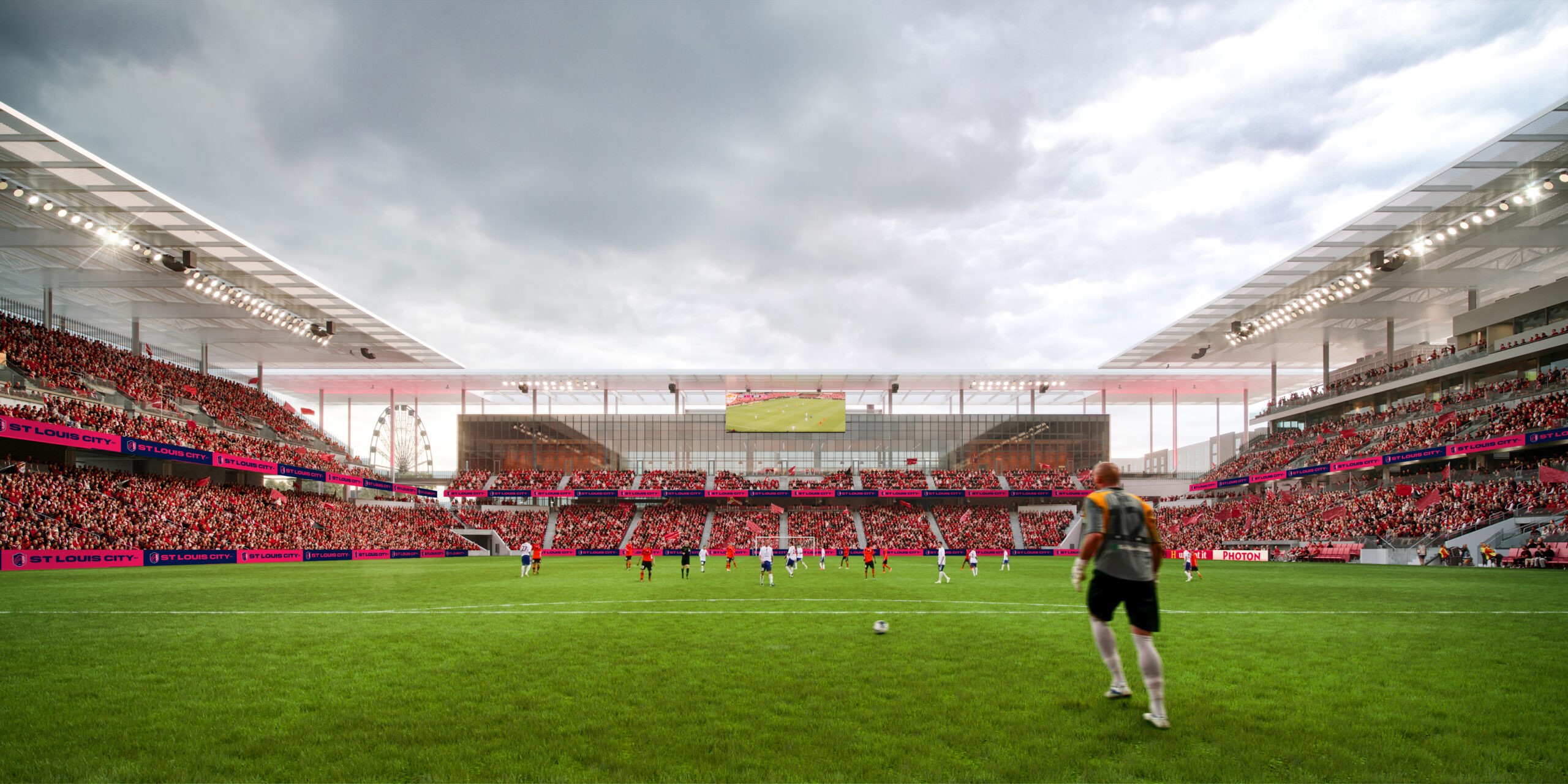 St. Louis CITY SC continues to work with its architecture partners, St. Louis-based architecture firm HOK and Julie Snow, Co-Founder of Snow Kreilich Architects, to ensure that, along with the other new additions in Downtown West, the club’s stadium district will further St. Louis’ revitalization and be a connection point between The Gateway Arch and Forest Park.

As part of a round table discussion on December 2, the team revealed new renderings for its state-of-the-art open-air stadium that will be located just west of Union Station. Officials from both the team and its partners discussed CITY’s fan- and community-first approach and reiterated the often-stated goal of creating more than just a sports venue, but also a place that connects to life in St. Louis on non-gamedays as well as gamedays.

A new unique set of entries to the stadium on the 22nd Street side to accommodate fans coming from the Northwest and Southwest, along with direct access to suites for suite-holders.

Design enhancements to the East Plaza, which is North of Market, with integrated access to stadium functions including concessions and restrooms to extend the fan experience and promote non-game day community experiences within the stadium district.

New restaurant and concession areas for fans that both engage the game, as well as views to the city in the North-side corners of the stadium.

Newly added pitch level loge boxes, which combines the intimacy of stadium box seats and upscale amenities of an Executive Suite, add to the unique game-day fan experience, while putting fans ever-closer to the action.

Upper-level outdoor terraces, with unmatched views of the field and the downtown St. Louis skyline, bringing the energy of the City within and connecting every view, experience and the overall design to the fabric of St. Louis.

“We designed the stadium district to be more than just about sports. It’s a key connection point in Downtown West, linking Union Station and businesses on Olive Street, while anchoring the West end of the Gateway Mall,” said Snow. “We envision a truly integrated stadium district that is part of the fabric of St. Louis. Not only will the energy from the stadium flow out into the district and the City, but the energy of the City will flow in.”

As a part of the stadium district design vision, every side of the stadium – North, East, South, West – will be open and inclusive and have no back door or back of house. With all sides open, the stadium district is a fully integrated urban design and an inviting experience for all in the St. Louis region and beyond. CITY is creating a best-in-class fan experience that is modern, inclusive and distinct, offering access and providing engagement differently than has ever been done before.

“The stadium design will provide our fans with an incredible amount of game-day variety, compelling sightlines and high energy – from pitch level loge boxes to upper-level outdoor terraces and everywhere in between,” said Matt Sebek, Chief Experience Officer for St. Louis CITY SC. “We are fortunate to craft this experience during a contemporary time in the industry, providing us a rare opportunity to create engagement that is safe, frictionless and personalized – both inside and outside our stadium.”

The team has finished the early construction phase after completing several milestones including mobilizing the site, mass excavating, incorporating the drilled piers, putting in the concrete foundations and tunnel construction. The next major milestone is the placement of the structural steel into the ground this month, which will be documented, commemorated and shared with the St. Louis region.

To stay up to date with St. Louis CITY SC, visit STLCITYSC.com