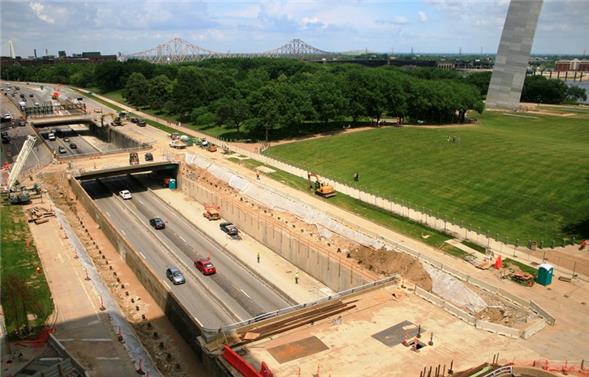 The Missouri Department of Transportation will take a major step forward this weekend on the Park Over the Highway project. At 8:00 p.m. Friday, June 6, MoDOT will close all lanes of I-44 (formerly I-70) downtown between Broadway and the Poplar Street Bridge.

The closure will allow crews to demolish the Market and Chestnut Street Bridges between the Old Courthouse and the Gateway Arch. The bridges will be replaced by the Park Over the Highway. Later this summer the interstate will close again, allowing crews to install structural steel girders across the highway to support the park.

The highway will reopen to traffic by 5:00 a.m. Monday morning, June 8.

You can view the ongoing construction on the Park Over the Highway and the rest of the CityArchRiver project from the web cameras at: www.cityarchriver.org/construction/webcam. 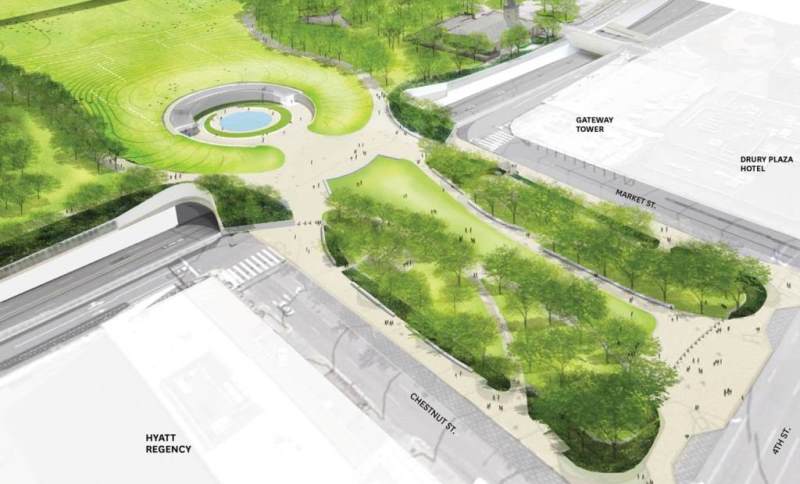 CityArchRiver 2015 will make the Arch easier and safer for everyone to experience by connecting, invigorating and expanding the park’s grounds and museums.

CityArchRiver 2015 offers the people and institutions who support the St. Louis region a once-in-a-lifetime opportunity to invigorate the jewel of St. Louis and make the Gateway Arch a destination of choice for the young and the old, those near and far, for generations to come.

The design starts with a new, dramatic Park Over the Highway that will, for the first time, allow visitors to walk from the Old Courthouse to the Arch grounds to the riverfront on one continuous greenway, without a curb or stair step in their way. With your support, the CityArchRiver 2015 project will have a lasting impact on the economic, social, environmental, recreational and educational fabric of the entire bi-state metropolitan region.

Joe Kleimanhttp://wwww.themedreality.com
Raised in San Diego on theme parks, zoos, and IMAX films, InPark's Senior Correspondent Joe Kleiman would expand his childhood loves into two decades as a projectionist and theater director within the giant screen industry. In addition to his work in commercial and museum operations, Joe has volunteered his time to animal husbandry at leading facilities in California and Texas and has played a leading management role for a number of performing arts companies. Joe previously served as News Editor and has remained a contributing author to InPark Magazine since 2011. HIs writing has also appeared in Sound & Communications, LF Examiner, Jim Hill Media, The Planetarian, Behind the Thrills, and MiceChat His blog, ThemedReality.com takes an unconventional look at the attractions industry. Follow on twitter @ThemesRenewed Joe lives in Sacramento, California with his wife, dog, and a ghost.
Share
Facebook
Twitter
Linkedin
Email
Print
WhatsApp
Pinterest
ReddIt
Tumblr
Previous articleUSC School of Cinematic Arts Receives Donation of Complete IMAX Theatre System
Next articleMadame Tussauds Beijing Becomes Merlin’s First Attraction in China’s Capital