The project will transform the property’s existing indoor and outdoor retail and entertainment spaces, positioning Union Station as one of the region’s premiere gathering and entertainment destinations. The site will feature a 200-foot-tall observation wheel, a new food-train park under the facility’s massive train shed, added green spaces, light shows and a fountain and fire show at the lake as a focal point of the new outdoor experience.

“Lodging Hospitality Management and Groundswell Design Group are bringing a new vision for Union Station to life,” said Bob O’Loughlin, chief executive of Union Station’s owner, Lodging Hospitality Management. “This redesign will invite people to experience Union Station in a totally new way. It will celebrate modern technology with key features that include the Gateway Light Tunnel, a fire show on the lake and a 3-D animation activation above the lake and on the hotel façade. As always, we will pay homage to the rich history of St. Louis and Union Station by creating a great entertainment destination to be enjoyed by guests of all ages.” 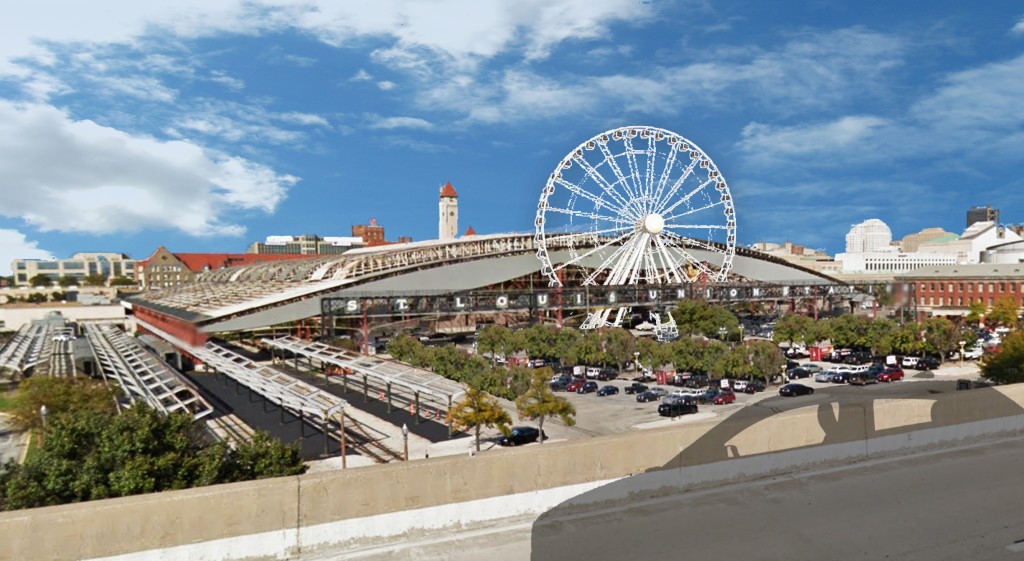 Indoors, the new concept will convert the existing mall area into 48 train-themed hotel rooms and 30,000 square-feet of new, private event space. This will bring the total number of hotel guest rooms to 587, and event space will total 137,000 square feet after the renovation. The new hotel rooms will be designed to reflect the historic railroads that originally operated at St. Louis Union Station, which opened to the public in 1894.  Guests will receive a personalized train ticket for their room at check in.  Inside the new train-themed rooms, high-end features include 50-inch TVs with sound bars for an in-room theater experience, hardwood floors and walk-in showers.

An additional 75,000 square-feet of indoor space at Union Station is currently being reviewed as the site of a major family attraction. Details will be announced in Spring 2016.

Outdoors, the St. Louis Wheel, a 200-foot-tall observation-style Ferris wheel, will be installed near the Hard Rock Café and will be open year-round.  The wheel features 42 fully enclosed gondolas, each seating up to eight adults. One VIP gondola will feature leather bucket seats, a stereo system, and a glass floor for a unique viewing experience.

New green space will be created outside the Hard Rock Café and will continue through a central plaza toward the lake and Landry’s restaurant.  The existing outdoor space will be reinvigorated with an array of food and drink offerings housed in a series of vintage train cars and repurposed shipping containers. The new food and drink outlets will feature American classics such as barbecue, burgers, ice cream and funnel cakes. Craft beer, wine and cocktails will be served throughout the space from a variety of themed beverage stations.

A new pedestrian entrance at 18th and Clark Street will feature the “Gateway Light Tunnel,” an illuminated archway that will guide visitors into the outdoor plaza.  Activities such as beer and barbeque festivals, live music events, farmers markets, craft fairs, and much more are being planned for the new plaza space.  At night, a variety of engaging light shows and illuminations will enhance the space.

“Festoon lighting along the pathways in seating areas will provide illumination and guide visitors through the space,” said David Fierabend, principal of Groundswell Design Group. “A special Tube Light show will be featured every 30 minutes which will synchronize with music. This breathtaking, multimedia experience will add a totally unique and contemporary dynamic to the property.  We’re very excited to partner in this project and help reestablish Union Station as a premier family-friendly destination in downtown St. Louis.”

Joe Kleimanhttp://wwww.themedreality.com
Raised in San Diego on theme parks, zoos, and IMAX films, Joe Kleiman would expand his childhood loves into two decades as a projectionist and theater director within the giant screen industry. In addition to his work in commercial and museum operations, Joe has volunteered his time to animal husbandry at leading facilities in California and Texas and has played a leading management role for a number of performing arts companies. Joe has been News Editor and contributing author to InPark Magazine since 2011. HIs writing has also appeared in Sound & Communications, LF Examiner, Jim Hill Media, and MiceChat. His blog, ThemedReality.com takes an unconventional look at the attractions industry. Follow on twitter @ThemesRenewed Joe lives in Sacramento, California with his fiancé, two dogs, and a ghost.
Share
Facebook
Twitter
Linkedin
Email
Print
WhatsApp
Pinterest
ReddIt
Tumblr
Previous articleChanges at SeaWorld’s Killer Whale Stadiums and New Logos for San Antonio Park
Next articleVehicles for Triotech’s NINJAGO the Ride Arrive at LEGOLAND Calfornia