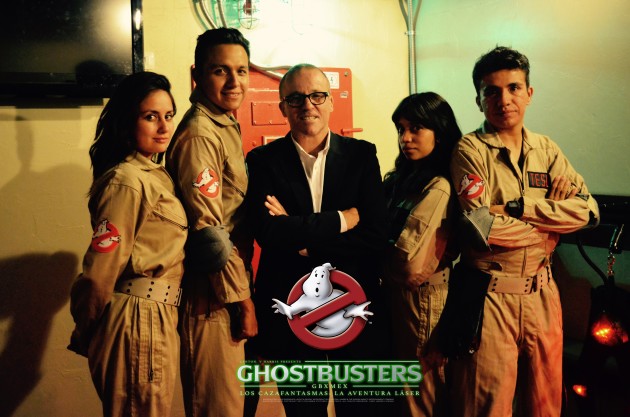 New York, NY, USA (June 9, 2015) — Lynton V Harris & The Sudden Impact! Entertainment Company have inked a three year deal with Sony Pictures Consumer Products in Los Angeles, and continue their relationship with Six Flags Mexico, with the world’s first live interactive GHOSTBUSTERS attraction, with launched into previews this past weekend ahead of an expected blockbuster Summer season starting mid-July.  This follows the success of the Company’s previous attractions there, ‘The Van Helsing Experience Live!’ and ‘TerminatorX: A Laser Battle for Salvation.’

Harris commented…“We probably could have eeked out another year with Terminator X given that the fifth movie comes out this Summer, but I have been pestering Greg [Economos] at Sony for the past couple of years to get a Ghostbusters attraction happening”.

Gregory Economos, Senior Vice President Global Consumer Products at Sony Pictures says, “We’re excited to collaborate with Lynton on this fun, yet spooky laser tag attraction. It’s a natural fit for the Ghostbusters brand, and we’re sure that attendees of Six Flags Mexico will know “who to call” after making their way through the arena as paranormal heroes themselves.” 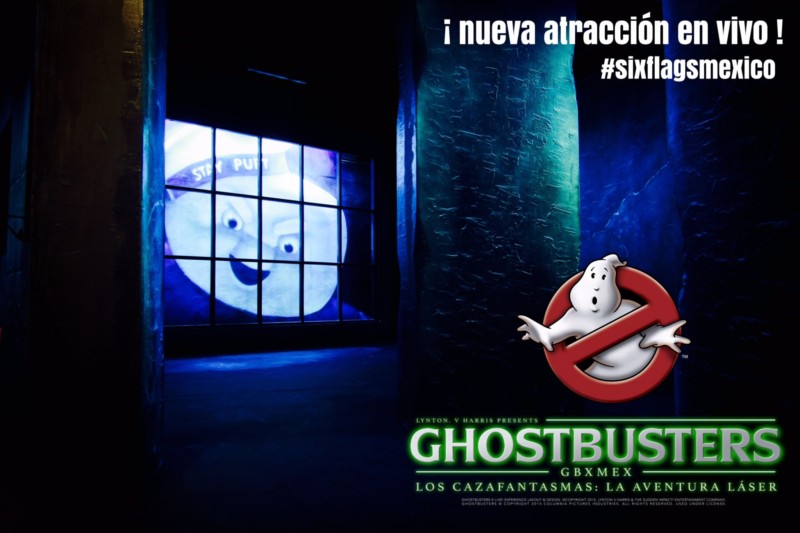 The new attraction has a cast of between six and eight live actors who will play as seasoned ‘Ghostbusters’ to interact with guests across two floors, in the historic La Llorona building inside Six Flags Mexico. Players are ‘prepped’ downstairs in the Ghostbusters Headquarters, given their laser ghostbustin’ gear, then led upstairs and broken into teams of Ghostbusters in order to compete against each other in an experience that features iconic environments and characters from the film. There are also cool ghost gates, hidden targets, and ‘surprise characters’ that appear and disappear with the help of UV and lasertag LED technology.

Director of Live Attractions Worldwide for Sudden Impact!, Dominic McChesney commented that “this first preview weekend was a litmus test to determine if we got the brand fit right, and the audience have already confirmed that it is a much more fun approach than Terminator X which had more of a ‘firm handed’ approach, but enjoyed a successful four year run. Ghostbusters will be a hit!”

“We are very excited to have an attraction like this – GHOSTBUSTERS – the attraction is based on the iconic and famous characters with the spooky adventure that the brand warrants. The families visiting us can enjoy a unique live – interactive attraction. We invite you to be part of this exciting experience that you can only find at Six Flags México”, said América Sosa, Communication manager at Six Flags México.

“It’s perfect for us” enthused Harris… our reputation is second to none in the interactive scare attraction domain globally, and we also pioneered branded live laser tag adventures. Ghostbusters is one of the most iconic brands in the history of the movies, and as the No #1 ‘horror-comedy’ of all time, and a new film in the works for 2016, it’s a chance to converge the Ghostbusters brand with an elevated laser tag experience to create the core brand value through creative application, along with a few fun startles.”

Joe Kleimanhttp://wwww.themedreality.com
Raised in San Diego on theme parks, zoos, and IMAX films, InPark's Senior Correspondent Joe Kleiman would expand his childhood loves into two decades as a projectionist and theater director within the giant screen industry. In addition to his work in commercial and museum operations, Joe has volunteered his time to animal husbandry at leading facilities in California and Texas and has played a leading management role for a number of performing arts companies. Joe previously served as News Editor and has remained a contributing author to InPark Magazine since 2011. HIs writing has also appeared in Sound & Communications, LF Examiner, Jim Hill Media, The Planetarian, Behind the Thrills, and MiceChat His blog, ThemedReality.com takes an unconventional look at the attractions industry. Follow on twitter @ThemesRenewed Joe lives in Sacramento, California with his wife, dog, and a ghost.
Share
Facebook
Twitter
Linkedin
Email
Print
WhatsApp
Pinterest
ReddIt
Tumblr
Previous articleMinnesota World’s Fair Bid Committee urges US to rejoin the BIE
Next articled3 Technologies to Showcase New 2x2plus Media Server at InfoComm 2015