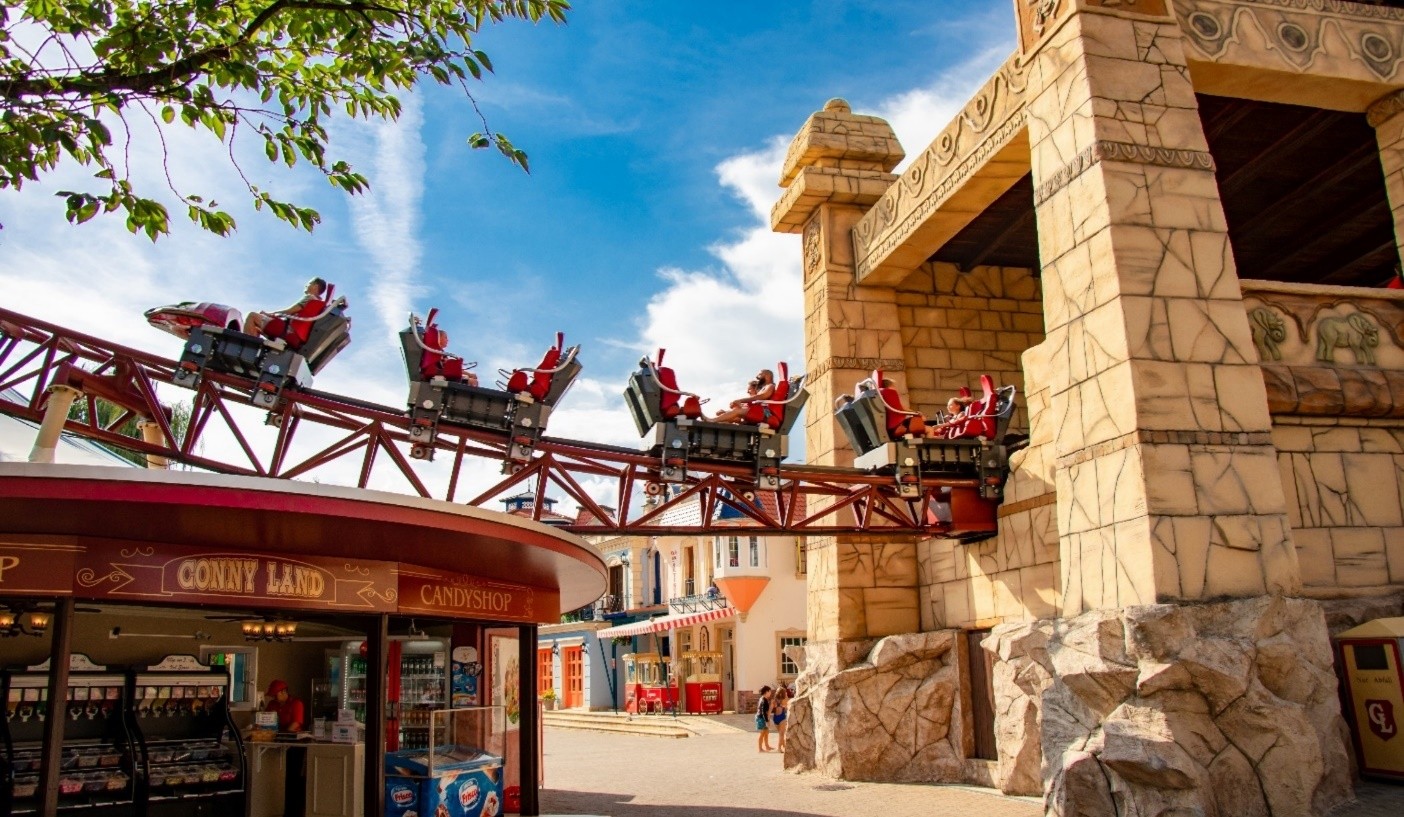 Starting in the summer season of 2020, the new Cobra has been a big hit not only for the visitors of Conny-Land in Swiss Lipperswil, but also for park manager Roby Gasser. The new Sunkid train has several improvements and innovations to offer.

Conny Land in Lipperswil is not only is the largest theme park  in Switzerland but has also been the park  with Europe’s largest linear roller coaster for a decade. At a length of about 215 meters, the 42-metre-high, slightly overhanging drop tower, a looping, two camelbacks, and the scorpion tail, the Cobra is one of a kind. It is unique world-wide in this form. Originally built by PAX, the roller coaster with a track width of 900 mm received an entirely newly developed train for its tenth anniversary. From the first inquiry to the final TÜV approval, the train from Sunkid-Heege was developed to Conny-Land’s wishes and handed over to the customer after only two years. The new Cobra stands out with several innovations and improvements that clearly emphasize the special status of this roller coaster once again.

The most distinctive change likely is the new arrangement of the seat rows. Except  for  the first and last cars of the train, all cars are equipped with two seat rows facing each other. The guests are not only sitting face to face during the ride but can experience it from two different perspectives. “This is  an innovation  that visitors love enormously in particular in a shuttle loop coaster like the Cobra in Conny-Land,” Roby Gasser rejoices about this special feature for Europe’s largest linear roller coaster as well.

The fully adjustable and dampened undercarriage ensures a more pleasant ride feel and reduces  the forces that act on the mechanics, extending the service life. “Targeted improvements were introduced even in the areas of operation and maintenance,” Sunkid-Heege CEO Michael Kalsch says. Lifetime-lubricated  bearings  and the optimized size of the components reduce the maintenance and inspection efforts required. In daily operation, the new bracket position monitoring of every single safety bracket, combined with  the  touch display in the command center, optimizes processes. The operator is not only shown information  on  the system status and bracket position of each seat, but also can unlock them at once or individually as required. Special paint with anti-slip effect ensures high functional safety in the foot area of the cars and on the friction areas of the drives.

The seat rows with the revolutionary new and patented Embrace 5 retention system is an innovation that is immediately comprehensible only to roller coaster enthusiasts and operators. The traditional solid shoulder brackets are replaced by the protruding safety bracket and the belt system connected to it. This is visible at  first glance. The C-bracket (safety bracket) primarily serves to guide the closed belt  system  and secondarily adds redundancy and hand support. The central element of the Embrace 5 is the padded belt system,  however.

Instead of being restricted by  solid shoulder  brackets, the rider  is now hugged by padded special belts  and  the also-textile chest support. It may sound comfortable already, but another property of this system turns it into a potential game changer as retention systems go. The Embrace 5 adjusts to physique and size of the riders, providing an unprecedent amount of comfort and adaptability. At the same time, it increases the ride’s thrill factor since the mental safety effect is far less present in contrast to use of the solid and restricting retention systems.

The retention system is multiply redundant and has a mechanical latch-handle system, a hydraulic safety cylinder, and the C-bracket with hand support and grip already mentioned.

The bracket position monitoring and the electrical control for opening of the safety bracket optimize operating processes.

At a total weight of only just under 80 kg, the seat unit with retention system is a true lightweight for rides of category 5. This weight class likely includes even the smallest and youngest riders. Children from a size of 130 cm or 8 years onwards can use a category-5 ride without an accompanying person. A category-3 ride lowers the minimal body size to 110 cm.

Joe Kleimanhttp://wwww.themedreality.com
Raised in San Diego on theme parks, zoos, and IMAX films, InPark's Senior Correspondent Joe Kleiman would expand his childhood loves into two decades as a projectionist and theater director within the giant screen industry. In addition to his work in commercial and museum operations, Joe has volunteered his time to animal husbandry at leading facilities in California and Texas and has played a leading management role for a number of performing arts companies. Joe previously served as News Editor and has remained a contributing author to InPark Magazine since 2011. HIs writing has also appeared in Sound & Communications, LF Examiner, Jim Hill Media, The Planetarian, Behind the Thrills, and MiceChat His blog, ThemedReality.com takes an unconventional look at the attractions industry. Follow on twitter @ThemesRenewed Joe lives in Sacramento, California with his wife, dog, and a ghost.
Share
Facebook
Twitter
Linkedin
Email
Print
WhatsApp
Pinterest
ReddIt
Tumblr
Previous article
WhiteWater: Planning for 2021
Next article
The FRIENDS Experience blows into the Windy City