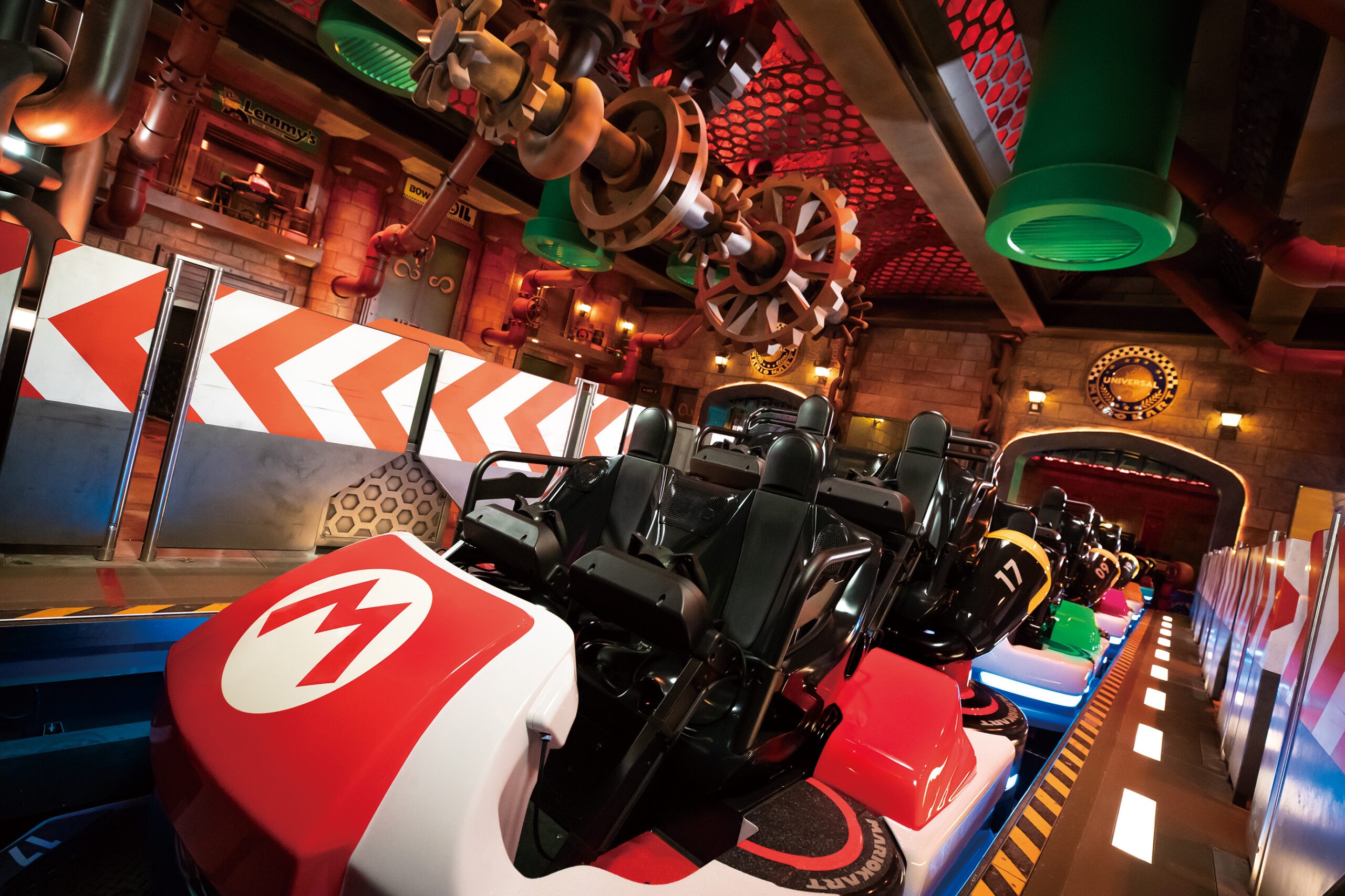 Universal Studios Japan will hold its grand opening of the world’s first SUPER NINTENDO WORLD on February 4, 2021 – bringing to life a highly themed and immersive land featuring Nintendo’s legendary worlds, characters and adventures where guests will be able to play inside their favorite Nintendo games. The grand opening of SUPER NINTENDO WORLD will kick off the park’s year-long 20th Anniversary Celebration.

SUPER NINTENDO WORLD will feature Mario Kart- and Yoshi-themed rides and attractions, as well as restaurants, shops and other experiences that can only be found at Universal Studios Japan. The colorful and interactive area offers a new theme park experience that lets guests immerse themselves in the world by wearing a Power-Up Band, an innovative technology to help bring gameplay to life and allow guests to keep score. Guests with a Power-Up Band can also punch “?” Blocks, collect virtual coins and more to bring the experience of playing Super Mario games to the real world.

Images of one of the icons of the new area, Bowser’s Castle have been made public for the first time. The inside of the castle has a mysterious atmosphere with stone walls, spiked fences and heavy iron doors along with a massive stone statue of Bowser at the center of a grand staircase. The powerful scale of the statue makes one feel as if Bowser will suddenly start to move.

“At the heart of the castle lies the world’s first ever Mario Kart theme park ride based on the Mario Kart series of games, which have sold over 150 Million units. Universal Creative has partnered with Nintendo to bring a real-life racing adventure to Universal Studios Japan with Mario  Kart: Koopa’s Challenge! Guests will put on their headset which takes them through the Mario Kart universe to experience never-ending excitement and thrills,” stated Thomas Geraghty, Sr. Director, Innovation & Global Executive Producer for Mario Kart.

The world’s first interactive Mario Kart theme park ride at SUPER NINTENDO WORLD will immerse guests into the worlds of Nintendo. Guests will race through the iconic courses of Mario Kart with their favorite Nintendo characters and be transported into the Nintendo worlds where they’re not just playing the game, they’re actually being immersed in the game. They will steer into the Mushroom Kingdom and throw shells as they race to the finish line with Mario, Luigi, and Princess Peach. Win or lose, every race is a brand-new, life-sized Mario Kart experience.

On Yoshi’s Adventure, guests will climb atop Yoshi’s back and follow Captain Toad on a treasure hunting adventure! Captain Toad has forgotten his treasure map. Guests need to find the 3 colored eggs that lead the way to the Golden Egg that Captain Toad was seeking. Guests will encounter a spectacular view of the Mushroom Kingdom from Mount Beanpole while having fun on this ride that’s perfect for the whole family.

SUPER NINTENDO WORLD will make its debut as the first multi-level land at Universal Studios Japan where Peach’s Castle and Bowser’s Castle tower over the area. It will feature Mario Kart and Yoshi-themed rides and attractions, as well as restaurants, shops and other experiences that can only be found at Universal Studios Japan. It also provides guests with an all-new type of “Asobi” play experience where they will jump, punch ? Blocks and collect virtual coins. Guests can purchase a Power-Up Band in the land and sync it to their smartphones to keep track of their score and compete with other park guests. At Key Challenge attractions, guests can collect keys, gather character stamps and more using their entire bodies in dynamic activities throughout the land. Families and friends will unleash their passion to play in the new SUPER NINTENDO WORLD.

Joe Kleimanhttp://wwww.themedreality.com
Raised in San Diego on theme parks, zoos, and IMAX films, InPark's Senior Correspondent Joe Kleiman would expand his childhood loves into two decades as a projectionist and theater director within the giant screen industry. In addition to his work in commercial and museum operations, Joe has volunteered his time to animal husbandry at leading facilities in California and Texas and has played a leading management role for a number of performing arts companies. Joe previously served as News Editor and has remained a contributing author to InPark Magazine since 2011. HIs writing has also appeared in Sound & Communications, LF Examiner, Jim Hill Media, The Planetarian, Behind the Thrills, and MiceChat His blog, ThemedReality.com takes an unconventional look at the attractions industry. Follow on twitter @ThemesRenewed Joe lives in Sacramento, California with his wife, dog, and a ghost.
Share
Facebook
Twitter
Linkedin
Email
Print
WhatsApp
Pinterest
ReddIt
Tumblr
Previous articleSocial media, blogging and content marketing: keeping a balance and perspective
Next articleLotte World becomes world’s first theme park to deploy Christie Mystique for outdoor 3D projection mapping