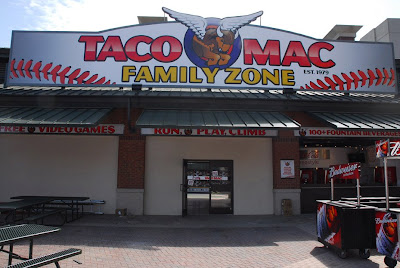 Through a new partnership with the Atlanta Braves, Taco Mac has developed a fun, interactive baseball-themed experience for those visiting Turner Field to cheer on their favorite team. A centerpiece component of the Taco Mac family Fun Zone is a refreshment space featuring the revolutionary Coca-Cola Freestyle fountain dispensers. This marks the first time that Coca-Cola Freestyle – which serves more than 100 beverage brands – will refresh fans in a Major League Baseball park. Taco Mac, which has restaurants across the Southeast, was the first casual dining chain to offer Coca-Cola Freestyle at all of its locations in the U.S.

“Families have enjoyed Taco Mac in their local communities for years, and we are happy to provide a unique place to make the Braves game day experience even more fun,” said Bob Campbell, CEO of the ownership group Tappan Street Restaurant Group.

At the Taco Mac Family Zone visitors will be able to experience interactive sports and games in a fun, Taco Mac-themed setting which reflects the atmosphere of their local Taco Mac restaurant. The attraction’s focal point is the Tree House, where kids can climb and play with a giant Tomahawk, as well as slide down the Taco Mac buffalo slide. Kids can also “get-into the game” by engaging in friendly competition with a variety of the latest Xbox Kinect games from Microsoft.

Lending to the authentic feel, special outdoor mini-fields have been created to give young fans the chance to “round the bases” like a real big leaguer. Families can also cool off with Powerade misters and have their photo taken inside a virtual fan-packed stadium. Those who’ve worked up a baseball-sized thirst can find refreshment in the Coca-Cola Freestyle Zone. Via an interactive touchscreen on the front of each fountain dispenser, four Coca-Cola Freestyle machines will offer families a choice of more than 100 brands including waters, sports drinks, lemonades and sparkling beverages.

“The Braves are proud to partner with Taco Mac and welcome the Taco Mac Family Fun Zone to Turner Field,” said Derek Schiller, Braves Executive Vice President of Sales and Marketing. “This unique partnership with Taco Mac will upgrade our offerings to families and our younger fans and also features the first Coca-Cola Freestyle fountain dispensers at any Major League Baseball stadium in partnership with our longtime partner, Coca-Cola.”

About MELT
MELT LLC is an Atlanta-based integrated marketing firm focusing on sports and entertainment, particularly in the professional, collegiate, entertainment and racing arenas. MELT’s award winning work has won acclaim such as Adweek’s Buzz Marketer of the Year, Event Marketer Ex-Awards and “It” List, MARCOM Gold Award, and Best in Atlanta, among others. MELT is currently working on its 10th NCAA Men’s Final Four for the Coca-Cola Company this year in New Orleans; its fourth season of Full Throttle NHRA Racing; Kia Motors of America; State Farm; Gulf Shores/Orange Beach Tourism, Taco Mac, Hangout Music Fest, ACC and many others.

About Coca-Cola Freestyle
Coca-Cola Freestyle allows people to select from more than 100 regular and low-calorie beverage brands. With more than 70 low/no-calorie options, more than 90 caffeine-free choices and 80+ unique brands offered nowhere else, Coca-Cola Freestyle truly offers the kind of variety designed to meet peoples’ beverage needs and lifestyles. Coca-Cola Freestyle is available in more than 3,200 outlets and more than 80 markets, covering 45 states across the U.S., including Atlanta, Boston, Chicago, Dallas, Houston, Los Angeles, New York, Miami, Phoenix, San Francisco, Seattle and Washington, D.C. The Company plans future U.S. introductions throughout 2012. Coca-Cola Freestyle was in development for more than four years prior to launching in 2010.

About the Atlanta Braves
The Atlanta Braves is Major League Baseball’s winningest franchise since 1991. During that time, Braves teams have earned 14 division championships, five National League pennants, a World Series title, and the 2010 National League Wild Card. Based in Atlanta since 1966, the Braves franchise is the longest continuously operating franchise in Major League Baseball. Atlanta Braves games are telecast on FS South, SportSouth, and Peachtree TV. Radio broadcasts can be heard in Atlanta on 680 the Fan, Rock 100 FM, 93.7 FM and regionally on the Atlanta Braves Radio Network. Follow the Braves at braves.com, facebook.com/braves, and twitter.com/braves.

About Taco Mac
Known for its delicious Buffalo wings, unparalleled beer selection, great atmosphere and excellent service, and family-friendly environment, Taco Mac began in Atlanta in 1979 when a couple of guys from Buffalo, N.Y. made a pit stop in Atlanta on their way to Florida. After touring the city and enjoying the weather they decided to stay and bring a popular northern cuisine – Buffalo wings – to the sunny South. Thirty+ years later, Taco Mac now has 27 stores across metro Atlanta, Charlotte and Chattanooga, and continues to grow. Today Taco Mac restaurants have a large number of high-definition, flat-screen televisions on display for guests to enjoy local and national sporting competitions. Taco Mac, owned by Atlanta-based Tappan Street Restaurant Group, has also made a name for itself as an avid supporter of the community. From in-kind donations for a school giveaway to an annual golf tournament that raises funds for non-profit organizations, Taco Mac is dedicated to serving the communities that surround them. For more information, visit www.tacomac.com.

Joe Kleimanhttp://wwww.themedreality.com
Raised in San Diego on theme parks, zoos, and IMAX films, InPark's Senior Correspondent Joe Kleiman would expand his childhood loves into two decades as a projectionist and theater director within the giant screen industry. In addition to his work in commercial and museum operations, Joe has volunteered his time to animal husbandry at leading facilities in California and Texas and has played a leading management role for a number of performing arts companies. Joe previously served as News Editor and has remained a contributing author to InPark Magazine since 2011. HIs writing has also appeared in Sound & Communications, LF Examiner, Jim Hill Media, The Planetarian, Behind the Thrills, and MiceChat His blog, ThemedReality.com takes an unconventional look at the attractions industry. Follow on twitter @ThemesRenewed Joe lives in Sacramento, California with his wife, dog, and a ghost.
Share
Facebook
Twitter
Linkedin
Email
Print
WhatsApp
Pinterest
ReddIt
Tumblr
Previous articleIPM Asian Gaming Special Report for 2012
Next articleReagan Presidential Library to Showcase Treasures of the Walt Disney Archives