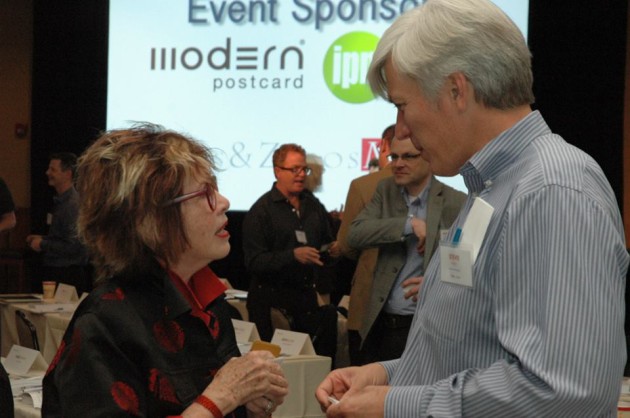 ABOVE: Patricia MacKay and Steve Birket at 2014 TEA Summit

[quote]An industry pioneer in her own right, Pat has supported TEA since its founding, sharing the vision for crediting and celebrating the under-acknowledged creative suppliers to the industry and the synergy between themed entertainment and theater – especially in her roles serving on the Thea Awards Committee and now as a TEA Summit co-chair.” — Steve Birket, TEA President[/quote]

“Pat’s background and influence helped foster TEA’s cordial relationship with the theater community, focusing awareness on crossover projects such as Michael Jackson ONE, KÀ and other Thea-honored Cirque du Soleil shows, plus groundbreaking Vegas developments such as Treasure Island,” said TEA president Steve Birket. “Her leadership has supported dialog with lighting design and other disciplines – sound, video, multimedia – that are critical but often not fully appreciated outside the theater world and that are ever more tightly integrated into today’s projects. Pat MacKay has continuously and generously given of her unique perspective, resources and connections – as well as her time – to further TEA’s mission. She has done much to help drive awareness ofthe industry, and awareness within the industry: consistently – with passion, humor, intelligence and style.”

Patricia MacKay will be the fourth annual recipient of the TEA Service Award, which was introduced to recognize outstanding contributors to the Themed Entertainment Association and its goals. Prior recipients of the award are Gene Jeffers (2012), Judith Rubin (2013) and Karen McGee (2014).

The TEA Distinguished Service Award is presented annually by the Themed Entertainment Association (TEA) at the Thea Awards Gala, in recognition of a TEA member’s outstanding contributions “above and beyond the call of duty” to the Association.Nominations are open to the TEA membership; the final selection of the recipient is made by majority vote of the TEA Past Presidents Committee and approved by the TEA International Board of Directors. 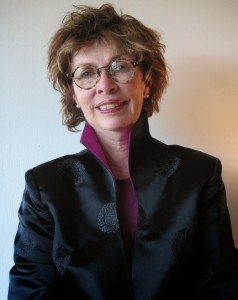 Patricia MacKay – a pioneering figure in entertainment communications – currently divides her time between her content consultancy Ones&ZerosMedia and her role as Editorial Director for Quite Specific Media Group.

She is currently working with select experts to focus on digital development and content projects in theatre, film, themed entertainment, costume, sets, projection, and lighting under the banner of A Pat MacKay Project for veteran publishing company Quite Specific Media Group, Ltd.  In 2014 her first project, Digital Costume Design and Rendering by Annie O. Cleveland was released and her second project, Peter Lawrence’s Production Stage Management for Broadway, just came off press in January 2015. In 2012, she produced back to back sessions for the annual USITT conference aimed at bringing themed entertainment professionals together with performing arts professionals to learn from each other.

She pioneered coverage of the coverage of the world of themed entertainment with her special issues:Las Vegas Spectacular (1976), Theme Parks (1977), behind the scenes at EPCOT (1992), Las Vegas update (1994), and Cruise Ship Showrooms (1995).

She has edited, co-authored, and/or provided editorial direction for a wide range of works including: Walt Disney Concert Hall: The Backstage Story, To Boldly Go (Behind the Scenes at Star Trek: The Experience), The Art of the Abraham Lincoln Presidential Library (for BRC Imagination Arts), numerous articles on all aspects of entertainment and entertainment technology appearing in various websites, Theatre Crafts magazine, TCI magazine, and Lighting Dimensions, Theatre, Spaces, and Environments (for Schechner/Rojo/MacNamara)/Drama Book), The Shakespeare Complex (with Glenn Loney/Drama Book), Supermannerism (for C.Ray Smith), and The Shapes of Our Theatres (for Jo Mielziner/Clarkson Potter).

MacKay has served as producer and moderator of panels and workshops on entertainment architecture, theatre architecture and themed entertainment and location based entertainment design. Additionally, she was instrumental in the launch and structure of eight years of Lighting Dimensions International workshops and seminars, She has also participated in sessions at Indiana University, Pro Sound and Light Asia/Singapore, World Light Fair /Tokyo, USITT, and the TCI Weekend Workshops.

She was elected fellow of the USITT in 1984, co-chaired the USA’s golden-Trigue-winning Prague Quadrennial Committee, is the winner of both the New England Theatre Award and the USITT Health & Safety award, and since 1996 has been a member of the Themed Entertainment Association’s Thea Awards Committee. She has served on the Wally Foundation Board of Directors and is active on the USITT Fellows Make It So task force. In 2007, she was honored with LDI’s Light In Life award for her many achievements and innovations. In 2012 Pat MacKay joined Roberta Perry as co-producer of the annual TEA Summit.

Joe Kleimanhttp://www.themedreality.com
Raised in San Diego on theme parks, zoos, and IMAX films, Joe Kleiman would expand his childhood loves into two decades as a projectionist and theater director within the giant screen industry. In addition to his work in commercial and museum operations, Joe has volunteered his time to animal husbandry at leading facilities in California and Texas and has played a leading management role for a number of performing arts companies. Joe has been News Editor and contributing author to InPark Magazine since 2011. HIs writing has also appeared in Sound & Communications, LF Examiner, Jim Hill Media, and MiceChat. His blog, ThemedReality.com takes an unconventional look at the attractions industry. Follow on twitter @themedreality Joe lives in Sacramento, California with his fiancé, two dogs, and a ghost.
Share
Facebook
Twitter
Linkedin
Email
Print
WhatsApp
Pinterest
ReddIt
Tumblr
Previous articleLightswitch Seeks Director of Lighting Design for Hong Kong Office
Next articleUltra-compact LED specialist Gantom promotes Landin Fusman to marketing director