[quote]We’ve been honored with some amazing projects on subjects like the Space Shuttle program, the world’s oceans, the American Revolution, American Presidents, and World Heritage Sites.  But This project has touched our hearts right here at home with our favorite baseball team.” — Mike Konzen, Chairman of PGAV[/quote]

St Louis, MO, USA (July 23, 2014) — On Thursday, July 24, 2014 from 6:00-8:00 pm, the Themed Entertainment Association (TEA) will host an evening at the St. Louis Cardinals hall of Fame and Museum.  The evening will include a panel discussion, free appetizers and an open bar.  Sponsors for the event are Matthews International, PGAV Destinations, and Craftsmen Industries. Tickets are no longer available to this free event, however, interested TEA members can CLICK HERE to be added to the wait list.

Located on the second floor of Ballpark Village, the new St. Louis Cardinals Hall of Fame and Museum showcases one of the greatest club collections in all of Major League Baseball, celebrating and exploring thousands of stories, victories, and heroes from the late 1800s to today. Cardinals Fans can watch the live stream of the Ceremony on cardinals.com, on the outdoor Busch II scoreboard screen, or on the 40 ft. television in FOX Sports Midwest Live! in Ballpark Village. 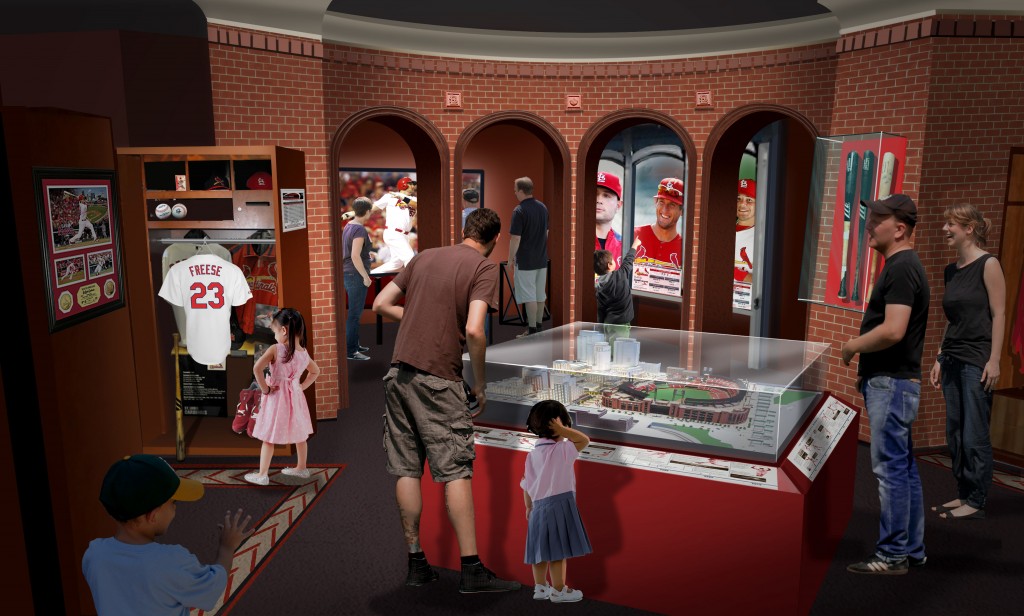 “The new Cardinals Museum in Ballpark Village is a celebration of the great heritage of Cardinals baseball in St. Louis,” said Bill Dewitt III, president of the Cardinals. “It tells the stories and pays tribute to the great players and personalities of the team through artifacts, storyboards, video highlights, and interactive exhibits.”

The new Hall of Fame  and Museum is an opportunity to showcase the incredibly extensive collection of Cardinals artifacts and memorabilia. At nearly 8,000 square feet, the Museum exhibits the team’s amazing collection, which is among the best in baseball. “Our collection holds virtually everything ever produced about the St. Louis Cardinals,” said Paula Homan, manager and curator of the new Museum. “We’re always amazed and honored by the public’s and players’ devotion to the club, who consistently provide us with equipment and memorabilia in great condition.”

The Museum walks visitors through the history of the Cardinals, beginning with the early days of Sportsman’s Park through today’s celebrated stadium and team. Each stage of the Museum has been carefully designed to reflect the historic stadium architecture and the period being explored through changing photographic pallets, case designs, and park aesthetics like appropriate woodwork and steel trusses.

The Cardinals Hall of Fame and Museum was conceived and designed by PGAV Destinations, a firm with a global practice in museums, zoos, aquariums, and theme parks.  While the firm’s work is on four continents, the design team was able to watch the construction of this project from its offices just blocks away, in downtown St. Louis.

“Each gallery has a completely different character, and the collection is just absolutely stunning,” said Emily Howard, VP and project leader at PGAV Destinations. “We wanted to create a space that could reach every single Cardinals fan – from die-hards to those just beginning to fall in love with the club – and we accomplished that through designing these galleries to be immersive, time-travelling experiences. At the end of the day, everyone is Cardinals Nation.” Howard went on to explain what sets the new Hall of Fame and Museum apart from other MLB museums. “The design of the new Cardinals Museum integrates the artifacts with touchscreen technology and other media within these beautiful, immersive environments. The intent is to appeal to a wide variety of audiences, not just the older historian crowd, and the Museum tells the large, big picture story with the opportunity to change and evolve to showcase the immense, wonderful collection.” 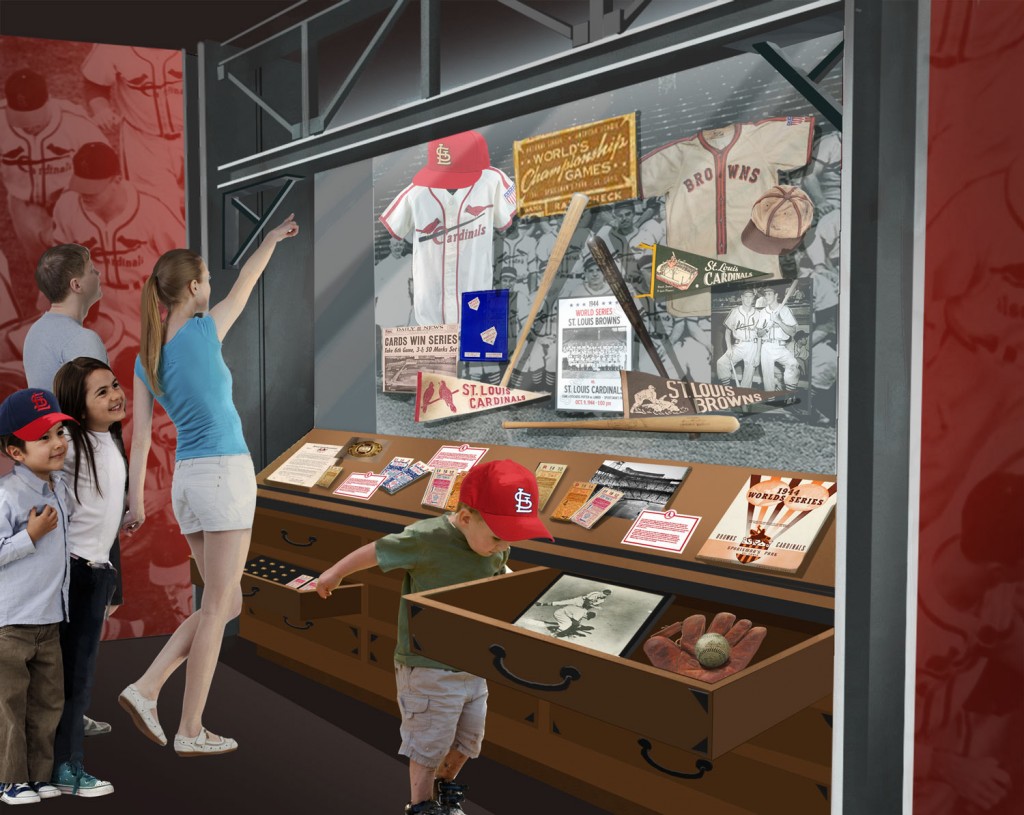 The Hall of Fame: The Hall of Fame is free and open to the public, displaying the official plaques of the Cardinals players honored in the Baseball Hall of Fame. The exhibit also offers a number of touch-screen interactives that allow fans to dig deeper into the honorees, learning more about their lives, careers, statistics, and videos from their biggest moments.

The Cardinal Way: The first gallery of the Museum showcases a feature video introducing visitors to “The Cardinal Way,” which is a philosophy on how to play baseball and develop players, created in the early days of the club and still celebrated today.

Sportsman’s Park: The second gallery transports fans back to the days of the first Cardinals ballpark. Paying homage to the “Knothole Gang,” children from the early 1900s who couldn’t afford tickets to games but would watch through the knotholes in the walls, this space allows visitors to peek into the first days of the team and experience the Broadcast Booth where they can record their own sportscaster broadcast of thrilling Cardinals moments.

Busch II: This space celebrates the players and major events during the period of the second stadium, with design touches of the field’s grasses and the famous “bottle-cap” rim of the stadium. The gallery features, like many of the other exhibits, a large highlight reel from the era – where the film occasionally pauses and strobes flash as the crowd captures landmark grand-slams and base-steals. Amongst legendary artifacts, guests can hold the real bats from the greatest Cardinals hitters for photo opportunities in a home-plate setting.

Look of the Cardinals: A colorful, fun gallery which explores the development of the team’s logo throughout its entire history, from uniforms to memorabilia, stadiums to equipment.

Busch III: The sixth gallery of the new Museum is a tribute to the current baseball stadium, where fans can “interview” four recent Cardinals managers to get their different thoughts on challenging baseball topics, or explore the touch screens which display all of the statistics in real-time of the current roster.

Changing Exhibit Gallery: To accommodate the immense collection of Cardinals artifacts and memorabilia, a changing exhibit gallery will always offer something new to see for fans to come back and visit again. Exhibits may feature championships, the evolution of baseball equipment, or famous Cardinals like Stan Musial or Fredbird.

Cardinals Nation: The final gallery in the new museum is all about the fans. Visitors can input their hometown location on a massive screen, which will showcase how Cardinals Nation reaches across the globe. A Give-Away gallery will celebrate all of the fun, great giveaways baseball fans have received at the stadium over the years, from bobble-heads to mini bats, jerseys to World Series ring replicas. Fans can also record their answers and opinions on the Question-of-the-Week, which could get featured on the stadium’s big screen during Cardinals games. The entire experience finishes with a stylish donor wall, thanking the nearly-countless number of donors who helped make the museum, and its collection, possible.

Joe Kleimanhttp://wwww.themedreality.com
Raised in San Diego on theme parks, zoos, and IMAX films, InPark's Senior Correspondent Joe Kleiman would expand his childhood loves into two decades as a projectionist and theater director within the giant screen industry. In addition to his work in commercial and museum operations, Joe has volunteered his time to animal husbandry at leading facilities in California and Texas and has played a leading management role for a number of performing arts companies. Joe previously served as News Editor and has remained a contributing author to InPark Magazine since 2011. HIs writing has also appeared in Sound & Communications, LF Examiner, Jim Hill Media, The Planetarian, Behind the Thrills, and MiceChat His blog, ThemedReality.com takes an unconventional look at the attractions industry. Follow on twitter @ThemesRenewed Joe lives in Sacramento, California with his wife, dog, and a ghost.
Share
Facebook
Twitter
Linkedin
Email
Print
WhatsApp
Pinterest
ReddIt
Tumblr
Previous articleMerlin Entertainments Extends accesso Partnership to SEA LIFE Birmingham
Next articleJames Ogul, InPark world’s fair editor