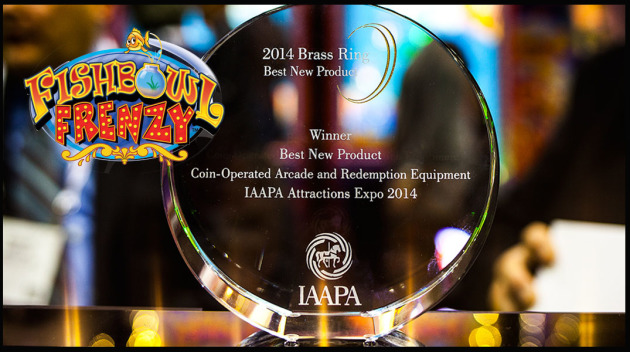 Prior to its official release at IAAPA, Fishbowl Frenzy had already caused quite a stir among those who caught a sneak peek of Team Play’s new augmented reality ticket redemption game while overseas at EAS and ENADA.  And, there was plenty of excitement in Orlando, Florida earlier this week, where Fishbowl Frenzy debuted to an enthusiastic crowd.

Strictly a game of skill, Fishbowl Frenzy combines advanced technology, mechanical skill play, exceptional video graphics and adorable fish characters with a carnival theme, to create a terrifically entertaining game – the likes of which have never before been seen.  The game challenges players to carefully time their release of a ball which bounces through a field of pins into one of the actual fishbowls below.  Adorable, computer-generated 3D fish celebrate each win, spinning and jumping with enthusiasm. 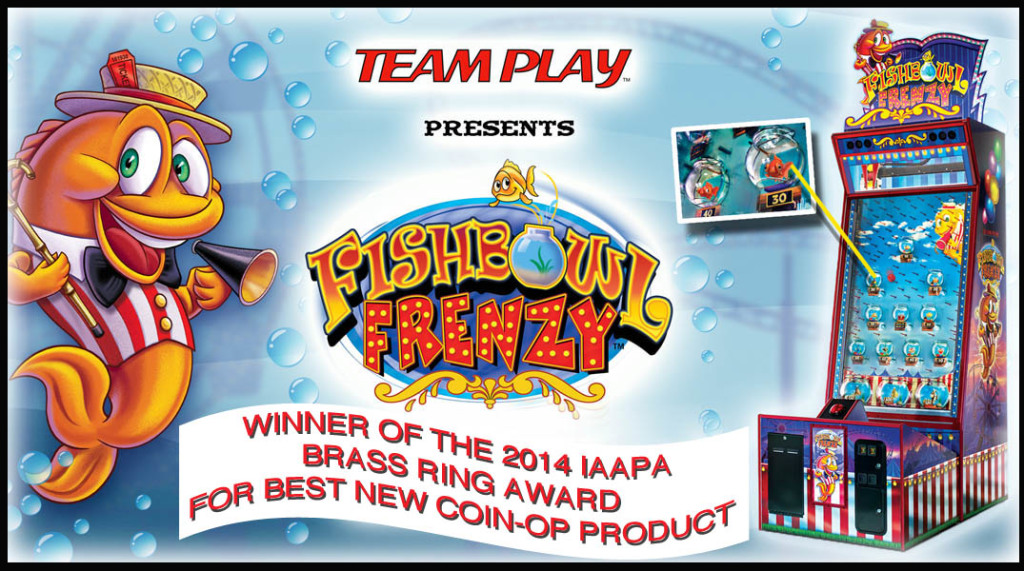 Fishbowl Frenzy’s unique game play is achieved by using a 65 inch transmissive LCD monitor.  Players can see through the translucent screen to watch the ball drop, eagerly waiting to see where it will splash and how many tickets they will win.  The game play is easy to learn and highly entertaining.

Test earnings of the prototype placed Fishbowl Frenzy solidly within the top ten earning redemption games, with its ranking climbing every week.  The consensus among everyone who has seen Fishbowl Frenzy is that it is an exceptionally great game.

“We’ve been told that this might be the best redemption game ever created,” said Team Play’s COO, Ken Fedesna.  “Winning the Brass Ring Award further confirms what we have been hearing – that people really like this game.”

Team Play started fulfilling the pre-production orders for Fishbowl Frenzy earlier this month, shipping in the sequence that orders were received.  So, if you haven’t ordered your Fishbowl Frenzy yet, catch up with your competition and get in the queue!

Joe Kleimanhttp://wwww.themedreality.com
Raised in San Diego on theme parks, zoos, and IMAX films, InPark's Senior Correspondent Joe Kleiman would expand his childhood loves into two decades as a projectionist and theater director within the giant screen industry. In addition to his work in commercial and museum operations, Joe has volunteered his time to animal husbandry at leading facilities in California and Texas and has played a leading management role for a number of performing arts companies. Joe previously served as News Editor and has remained a contributing author to InPark Magazine since 2011. HIs writing has also appeared in Sound & Communications, LF Examiner, Jim Hill Media, The Planetarian, Behind the Thrills, and MiceChat His blog, ThemedReality.com takes an unconventional look at the attractions industry. Follow on twitter @ThemesRenewed Joe lives in Sacramento, California with his wife, dog, and a ghost.
Share
Facebook
Twitter
Linkedin
Email
Print
WhatsApp
Pinterest
ReddIt
Tumblr
Previous articleSpecially Designed Ballocity from WhiteWater to Highlight new San Antonio FEC
Next articleIAAPA Announces 2014 Service Awards; Mats Wedin of Liseberg Awarded for Lifetime Service