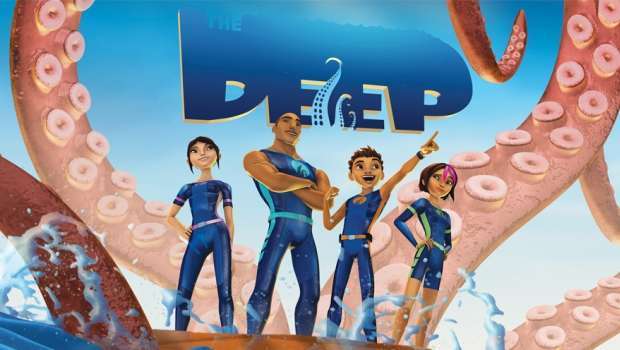 Technicolor has signed an agreement with 3-D and 4-D attraction designer SimEx-Iwerks Entertainment to create a 4-D theatrical experience based on the underwater adventure series The Deep, that will premiere at landmark venues globally starting in Spring 2018.

The new 4-D theatrical event, The Deep: Mystery of the Ancient Amulet, will provide a 12-minute fully immersive 3-D viewing experience, featuring exclusive new 3-D CG animation, an original story line, and stunning special effects—delivering on the 4-D experience with vibrating seats, water spraying, bubbles and more.  The in-theater experience will be available at zoos, theme parks, aquariums and other venues around the world.

The Deep: Mystery of The Ancient Amulet follows the continuing underwater adventures of the Nekton family—a brilliant team of underwater explorers with an unquenchable thirst for discovery who utilize state-of-the-art technology to explore the mysterious depths of the oceans.  When the family come into possession of a mysterious amulet from a suspicious black market dealer, they begin their ocean journey in search of answers, but the amulet is stolen by The Dark Orca pirates, and then lost in caverns beneath the seafloor. When the Nektons finally recover the amulet, they discover its unbelievable connection to a nearby island.

“SimEx-Iwerks Entertainment is unparalleled in its field and we’re thrilled to be creating this 4-D The Deep adventure with them,” commented Wendland. “Now that The Deep is broadcast in over 130 territories, it’s exciting to see the brand finding a new home in theme parks and other live attractions around the world.”

“Season two of the The Deep debuted on Australia’s ABC ME on August 22, and ranked as the top-rated show for the channel that day, and it also premiered on the UK’s CBBC in July, quickly ranking as the #1 series for Kids 6-12 for the week beginning July 31, according to BARB,” added Pam Kunick-Cohen, Head of Brand Management, Licensing and Merchandising, Technicolor.  “It is this kind of success, evidenced by our distribution partners around the world, that has opened up many possibilities for us to grow the brand across different formats, including this incredible partnership with SimEx-Iwerks Entertainment to create and deliver a high-energy, unforgettable and exhilarating show for families to enjoy and further engage with The Deep.”

“The Deep delivers exactly what our partners across the globe want—an action-packed, family-based adventure,” said Mike Frueh, Senior Vice President, Licensing and Distribution, SimEx-Iwerks Entertainment.  “Additionally, the tie to the ocean will inspire young guests towards environmental stewardship which is an important message to our many zoo and aquarium partners worldwide.”

The Deep has garnered several international industry nominations and awards, including the 2017 Kidscreen Award for Best New Series (Kids Category); the Golden Sparrow Award at the German Children’s Media Festival; and multiple nominations for the 50th Annual AWGIE Awards in Australia for Children’s Television, with writer Thomas Duncan-Watt winning the AWGIE for his script Beware The Sentinels in the Children’s Television category ‘C’ Classification, children’s 5-14 years.

Technicolor is the underlying rights holder to The Deep and has oversight for the brand overall, managing the brand licensing extensions with CPLG, a DHX Media company who serves as the multi-territory licensing agent for the brand, including North America, EMEA (excluding Germany) and Latin America. A Stark Production and DHX Media are the co-producers of The Deep animated series, with distribution handled by DHX Media.

The Deep is based on the Aurealis Award-winning graphic novel series created by multi-award-winning best-selling comic book author and playwright Tom Taylor (All New Wolverine, Earth 2, Superior Iron Man, Batman: Legends of the Dark Knight, Injustice: Gods Among Us, Star Wars: Blood Ties), illustrated by James Brouwer (Justice League Beyond), and published by Gestalt Comics. Taylor serves as co-creator and lead writer of the series and Brouwer serves as co-creator and art director.

Joe Kleimanhttp://wwww.themedreality.com
Raised in San Diego on theme parks, zoos, and IMAX films, InPark's Senior Correspondent Joe Kleiman would expand his childhood loves into two decades as a projectionist and theater director within the giant screen industry. In addition to his work in commercial and museum operations, Joe has volunteered his time to animal husbandry at leading facilities in California and Texas and has played a leading management role for a number of performing arts companies. Joe previously served as News Editor and has remained a contributing author to InPark Magazine since 2011. HIs writing has also appeared in Sound & Communications, LF Examiner, Jim Hill Media, The Planetarian, Behind the Thrills, and MiceChat His blog, ThemedReality.com takes an unconventional look at the attractions industry. Follow on twitter @ThemesRenewed Joe lives in Sacramento, California with his wife, dog, and a ghost.
Share
Facebook
Twitter
Linkedin
Email
Print
WhatsApp
Pinterest
ReddIt
Tumblr
Previous article
Picsolve Acquires Freeze Frame
Next article
Evans & Sutherland Joins with Sonics2 and Spitz to Create Next Generation of Giant Screen Theaters