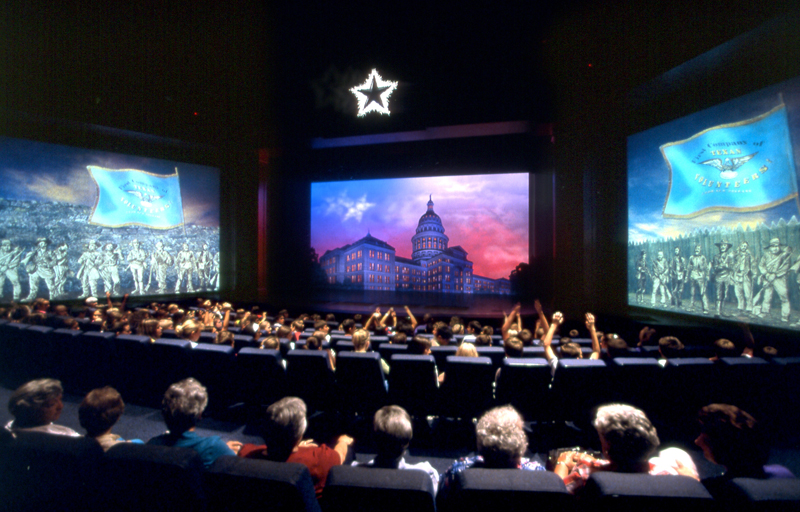 The Bullock Texas State History Museum, which opened in 2001, invites visitors to interpret for themselves the story of Texas history. The multimedia Texas Spirit Theater is auditorium style with a standard proscenium stage plus two flanking openings. Three flat projection screens provide an immersive experience for audiences when a single image fills all the screens; the side screens can also display different images to support the narrative. A complement of 4D effects enhances productions with atmospherics and movement.

The theater currently hosts two shows in rotation. “Star of Destiny,” produced by BRC Imagination Arts, looks at the epic history of Texas through stories of perseverance: the devastating Galveston hurricane of 1900, East Texas oil gushers, and the takeoff of a Saturn V rocket seen from the Johnson Space Center. “Wild Texas Weather” enables audiences to feel the wrath of Mother Nature in 22 minutes of footage showing wicked weather conditions: hurricanes, thunderstorms, droughts and flash floods, all accompanied by an original score featuring artists from Austin’s vibrant music scene.

The Texas Spirit Theater is also available to the public for screenings, presentations and conferences. It’s a favorite venue for Austin’s thriving independent filmmaking community. “The theater is very busy. In fact, that made it difficult to do the systems upgrades – we had to sneak in after hours and work as quickly as possible,” says Electrosonic project engineer Dan Lauf.

Electrosonic had provided the theater’s original audio and video systems, which had continued to function well but were a dozen years into their life cycle. “The upcoming ‘Shipwrecked’ film offered a good opportunity to upgrade the equipment and provide a clean slate for programming the new show,” Lauf points out.

Told through the eyes of a young crew member, “Shipwrecked,” from Cortina Productions, supports the upcoming exhibition about the La Belle, one of Robert de La Salle’s four ships that set out to explore the Gulf of Mexico in 1685.  The film will support a new exhibition on the excavation of the La Belle, which sank off the Texas coast in 1686.The remains of the hull will be on display along with over a million recovered artifacts. The theater’s 4D effects will permit audiences to feel the power of the storm that resulted in the sinking of the ship.

Electrosonic replaced the existing show control system with an Alcorn McBride V16 Pro show controller and swapped out HD-MPEG video players in favor of a Dataton WATCHOUT video playback system. Electrosonic ensured that the programming for “Star of Destiny” and “Wild Texas Weather” translated smoothly to the new gear and that programming for “Shipwrecked” got underway efficiently.

“The new WATCHOUT system gives the theater technicians a greater ability to run shows easily every day and play alternate content easily when the venue is used for other events,” Lauf says. “We didn’t just install the new equipment – we provided training for it, including a two-day session with visiting Alcorn McBride personnel. A lot of our focus for this project was getting the theater techs ready to fully service and operate the space in all ways.”

The Museum’s Director of Theaters, John Lewis, concluded, “Electrosonic has been a great partner to the Bullock Museum, providing top-notch technical design, support and guidance since the museum opened in 2001. The recently upgraded theater system has breathed new life into the Texas Spirit Theater by increasing programming capabilities, streamlining operations, and preserving the theater’s tradition of providing a superior immersive theater experience to generations of Texans and visitors to Texas for years to come.”

Joe Kleimanhttp://wwww.themedreality.com
Raised in San Diego on theme parks, zoos, and IMAX films, InPark's Senior Correspondent Joe Kleiman would expand his childhood loves into two decades as a projectionist and theater director within the giant screen industry. In addition to his work in commercial and museum operations, Joe has volunteered his time to animal husbandry at leading facilities in California and Texas and has played a leading management role for a number of performing arts companies. Joe previously served as News Editor and has remained a contributing author to InPark Magazine since 2011. HIs writing has also appeared in Sound & Communications, LF Examiner, Jim Hill Media, The Planetarian, Behind the Thrills, and MiceChat His blog, ThemedReality.com takes an unconventional look at the attractions industry. Follow on twitter @ThemesRenewed Joe lives in Sacramento, California with his wife, dog, and a ghost.
Share
Facebook
Twitter
Linkedin
Email
Print
WhatsApp
Pinterest
ReddIt
Tumblr
Previous article
Alcorn McBride Brings Lincoln Alive at Lincoln College’s Lincoln Heritage Museum in Lincoln
Next article
Minions Rejoice! Gru Arrives at Universal Studios Hollywood to Create Mayhem and Super Silly Fun