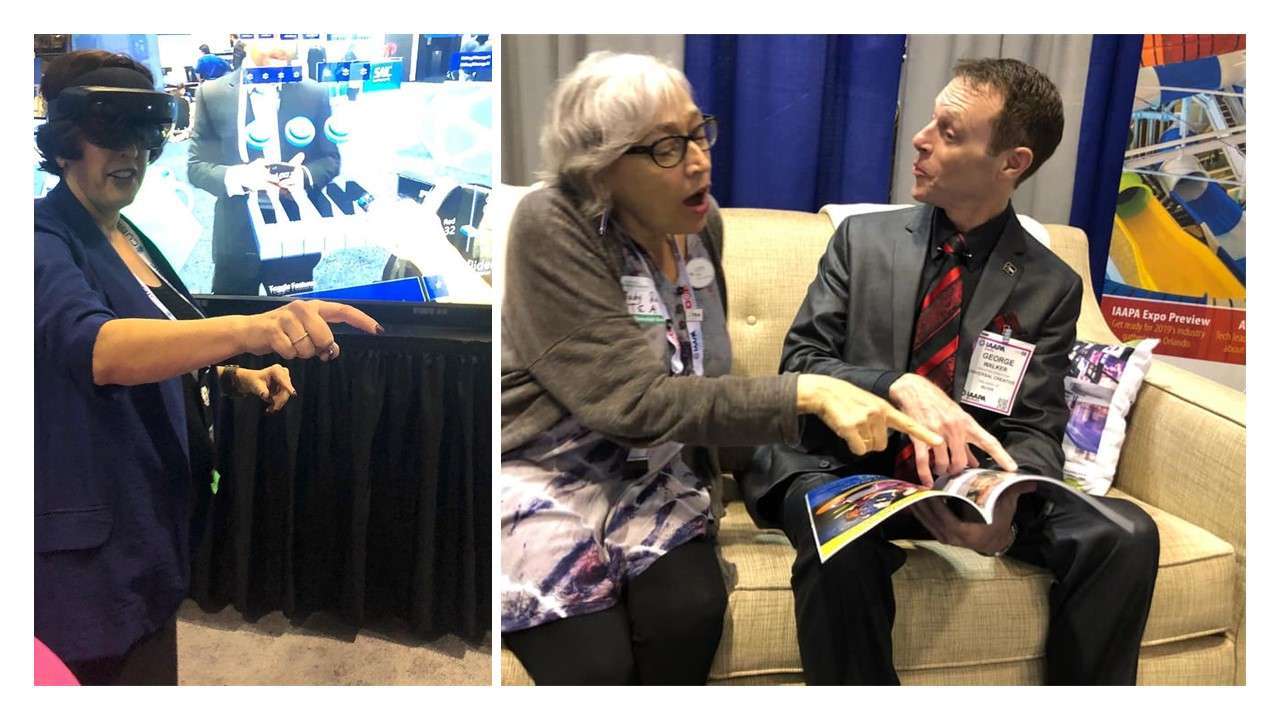 Story by Rona Gindin with sidebars from Judith Rubin

Here’s a first in my experience. We gathered with other journalists at an exhibitor’s booth for a scheduled press conference and … and … after 10 minutes or so, someone hurriedly approached our foot-tapping group and said something like, “We’re so sorry, but have to cancel the press conference. Every one of us is busy with potential clients so none of us can make the presentation.”

Well, good for them. Like many at IAAPA Expo 2019, the annual global gathering of the International Association of Amusement Parks and Attractions, the folks at this booth – Omni Arena – were selling, and selling big. “Yes, our sales and general interest this year was certainly higher than last year,” Jan Goetgeluk shared a week later. Goetgeluk is founder and CEO of Virtuix, which owns the Omni Arena virtual reality esports attraction. “The industry as a whole is booming, with many venues expanding or new locations getting started,” he noted. Days after being contacted about this by InPark, the company sent out a press release headlined,

Omni Arena happens to align with the second big trend we observed over the four-day trade show, which boasted 42,600 attendees and 1,149 exhibitors. Omni Arena is a mixed reality (MR) offering, as users physically walk around while using virtual reality (VR) headsets. A wide variety of vendors featured attractions that encompass two or more technologies, or one technology together with reality.

Having recognized the opportunities in themed entertainment, IP holders’ more direct involvement in the project process – from licensing through to opening – empowers fans and ensures authenticity and consistency across platforms. This supports the holistic model, which has taken hold and proven itself in recent years and facilitates multiple guest experience portals unfolding over time, including theme park attractions, feature films, video games, live shows, hospitality and traveling exhibitions – each bringing something new to the story. Lionsgate Entertainment has set a strong, recent example. — J.R.

Understandably, exhibitors were reluctant to share specifics of their sales results when asked post-show. Still, some smaller and mid-size vendors were visibly, and verbally, excited about the interest their products had received.

At the humble Virtual Room booth situated in an outside building, for example, Director Gilles Amsallem was visibly enthusiastic. “We already sold three,” he said partway through the Expo. Virtual Room is a VR escape room that enables participants to play together via their own headsets. For now, they can meet up in a virtual escape room even though they are physically in different rooms. Once 5G technology becomes widespread,  enabling rapid-fast connections, they’ll be able to meet in virtual escape rooms hundreds of miles apart. One employee can run up to eight rooms.

Emphasizing that this product is “entertainment, not gaming,” Amsallem touts it for team-building events as well as recreational play. The current program is divided into five segments, and participants can play through one, five, or any other number.

Simworx, too, was encouraged. “Simworx saw one of their busiest shows to date with IAAPA Expo this year,” reported Nicole Sangster, digital content producer for Simworx. “We received many more enquiries than we have ever done in recent years, many of them serious prospects that we have since seen positive communications from following the show.”

The large exhibitors are more polished, making it hard to get even brief sales reports, yet there’s this Saudi Arabia project that must ultimately benefit many IAAPA vendors. Under the government group known as SEVEN, for Saudi Entertainment Ventures, this outfit arrived ready to SHOP with a capital S-H-O-P.

Explaining that 82 percent of Saudi nationals are under 35 years of age, and the median age is 30, and those folks are going elsewhere – especially Orlando, Florida – for recreation, SEVEN’s CEO Bill Ernest detailed plans to build 72 entertainment complexes around the Kingdom in the next 10 years. At an average of 50,000 square meters, each will have multiple AMC movie screens (movies had been banned for 35 years; the plan now is 450 screens total) plus some mix of amusement parks, water parks, augmented reality facilities, sports areas, scuba diving, live entertainment and restaurants, plus more, for a cost of US $64 billion.

Ernest, a Disney veteran, first announced SEVEN’s existence and plans at the 2018 IAAPA Expo, and the shopping spree began in earnest at the 2019 Expo. “We’re getting a chance to talk to the ride vendors, the food purveyors and the retail shops,” Ernest told InPark. “We are literally in the design space today of putting this together.” Thinkwell Group and Gensler Companies are key partners. Those looking to get involved should write to [email protected] for details.

With the number of theme parks, water parks and smaller attractions rising quickly in other parts of the Mideast and in Asia, SEVEN represents only part of the buying base for the types of products displayed on the IAAPA Expo floor. That’s not to mention new attractions in the Americas and Europe, or additions to current parks.

Taking a cue from the escape room model, operators and designers are offering scalable LBE concepts, combining technologies and platforms that have reached a transparent maturity, such as touchtables, image generation and gaming elements. The range includes non-linear, multi-player stories in interactive spaces; popup exhibits, portable/touring educational displays and brand experiences. Media and scale make them readily refreshable. Size and footprint can vary from a room serving perhaps six people at a time, up to a whole park, temporary or permanent. This is a powerful, emerging business model. A high-profile recent example is the touring “FRIENDS” popup designed by JRA. — J.R.

The world’s tech revolution is playing out in the attractions industry in notable ways. Makers of every attraction using VR, augmented reality (AR) and/or artificial intelligence eagerly anticipates the day mega-fast 5G will be available to integrate assorted technologies at super rapid rates. Meanwhile, they’re hard-wiring their ever-more-sophisticated offerings so the assorted mediums can work together, or with real life.

This movement can take so many forms.

At Infinite Kingdoms Ancient Lore Village, an entire vacation will be based around a mix of reality and technology. The establishment will be a resort. Families staying there will have bonding vacations. Yet they’ll also stroll around the property solving puzzles, using interactive game technology by Weber Group along the way. The technology will be “behind the curtain,” Ancient Lore Village CEO Matthew Cross explained at IAAPA. “You never see it; you never feel it.” However, guests do espy a treasure chest magically open, a treehouse change colors or a glove activate, interspersed with physical activities.

At Hersheypark® in Pennsylvania, the new Hyperdeck VR attraction will include a full-motion floor and manufactured wind and heat when it opens in 2020.

Autonomous vehicles. The use of autonomous vehicles is gaining traction. Cavu Designwerks, for instance, has adapted a self-driving vehicle used in manufacturing warehouses for the dark ride market. No outside navigation is needed. Likewise, Simworx created a dark ride vehicle that runs on a battery. It can go sideways, rotate 360 degrees and move from screen to screen.

Flying theaters. Simworx introduced a miniature flying theater, so petite it can fit into a limited space with only 20 or 24 seats. “Our Mini Flying Theatre is a more accessible size to smaller vendors who previously might have discounted the possibility of fitting a flying theatre into their space,” said Sangster of Simworx., noting that this and another niche product “helped us to stand out from the crowd.” Many others talked about scaled-down flying theaters too – and producing media that can be licensed to more than one theater.

Plug and play. Like the mini flying theaters, many offerings are for sale essentially in one piece. Arihant, from India, launched a waterplay structure themed as a pirate ship. The fiberglass and steel structure is big enough to have indoor space, and has seven slides on the exterior. Arihant also introduced a waterplay area called Rain Dance that has four themes – circus, pirate, jungle and castle. Operators can rotate the themes for variety. Brogent is offering a turnkey entertainment center complete with a 19,000-square-foot, indoor race car simulators plus food and beverage.

Keeping it small. Not every theme or water park is massive. After finding success with small-scale facilities in coastal Spain, Orlando-based Falcon’s Creative Group is partnering with neighbor Katmandu to expand the Nepal-themed concept to North America and the Caribbean. Lagotronics makes a 12-meter-by-12-meter version of its new Smurfs GameChanger dark ride.

Artificial intelligence. AI is improving industry-wide, as more vendors than ever offer software that allows for recognizing guests throughout their stay. Attractions can therefore, say, identify who’s in each photo and offer to sell those images at day’s end. When LEGOLAND builds its new theme park in New York, it will use AI cues to create an animated LEGO-style image of each guest on a dark ride. Holovis is assisting with the development and was demonstrating the tech at its booth.

Gamification doesn’t have to mean combat, and even when combat is involved, today’s technologies facilitate a more complex experience and story. This is abundantly demonstrated by Disney’s Star Wars: Rise of the Resistance, the new pinnacle of seamless, immersive, interactive attraction within the Star Wars Galaxy’s Edge realms at Disneyland and Walt Disney World. Looking more broadly at the industry, flying theaters, trackless vehicles, haptics, fulldome, RGB laser and other maturing technologies support many possibilities to explore, interact and create. Even VR is starting to live up to the hype. Embracing enterprise is a sea change within the trend – data centers, IT culture and virtualization are being adopted and adapted for park-wide and attraction-wide control, with creative new twists ahead. These concepts are illustrated in our Farbound: Game masters and Getting to know ISAAC coverage. — J.R.