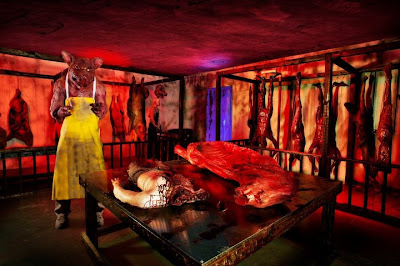 Phoenix, AZ, USA /PRWEB/ — The business of fear is about to get personal this year as Arizona’s largest haunted attraction, The Nest, unveils plans for its 2012 Halloween season. The Nest is incorporating social media integration and RFID tracking into its blueprint, allowing thrill seekers to experience fear like never before.

“By integrating Facebook Connect we are taking the entire haunted house experience to a new level and redefining this industry,” said Steve Kopelman, producer of The Nest. “As guests walk through The Nest, they will see and hear their name, see their photos, receive messages and a few more terrifying surprises. We are truly creating their worst nightmare.”

Kopelman partnered with Brightline Interactive, a leader in creative and digital activations and with FISH Technology, known for creating interactive technology systems for experiential environments. Through integration of RFID tracking technology, the new sensor system at The Nest automatically follows guests through the haunt, personalizing the experience as they walk from room to room.

“This is a big deal,” added Kopelman. “It’s the greatest innovation in the history of the entertainment and amusement parks utilizing social media, RFID and digital experiences. The Nest is the first in the world to debut this level of technology integration and as we raise the bar for the entire industry, we once again set ourselves apart from the rest.”

Now in its sixth year in Phoenix, Arizona, The Nest is over 50,000 square feet, nestled behind the façade of Rawhide’s busy Main Street. With nearly $1 million in animatronics, and special effects it is no surprise that ABC News and Good Morning America named it the “Spookiest Place in America” and broadcasted live from the Nest during its morning Halloween show. Additionally, the Nest has been named the scariest haunted attraction in the country by MSN and scariest haunted attraction in the west by MTV. “Every year we improve the haunt and bring it to the next level,” added Kopelman. “This year however, we simply redefined the experience.”

The Nest will open on September 28th, 2012. Visitors will have to make their way through a horrifying maze of connecting sections, featuring Bleak – a terrifying, dark labyrinth that defines claustrophobia followed by Mirror Maze, Turmoil 3D – a three dimensional experience, and culminating with a walk through the horrific rooms of The Nest – where Jacob Kell, the serial killer upon whom the attraction is based, will wait with personalized greetings.

For exact dates and hours of operation, and additional information about The Nest please visit http://www.frightened.com.

About FISH:
FISH is a leader in technology integration for interactive experiences. FISH has created the world’s most interactive measurement systems for all types of experiential brand activations. The company’s Immersive Media applications are used by numerous recognizable brands, including the US Army, US Air Force, Microsoft, Toyota, Smirnoff, and Ford.

Joe Kleimanhttp://wwww.themedreality.com
Raised in San Diego on theme parks, zoos, and IMAX films, InPark's Senior Correspondent Joe Kleiman would expand his childhood loves into two decades as a projectionist and theater director within the giant screen industry. In addition to his work in commercial and museum operations, Joe has volunteered his time to animal husbandry at leading facilities in California and Texas and has played a leading management role for a number of performing arts companies. Joe previously served as News Editor and has remained a contributing author to InPark Magazine since 2011. HIs writing has also appeared in Sound & Communications, LF Examiner, Jim Hill Media, The Planetarian, Behind the Thrills, and MiceChat His blog, ThemedReality.com takes an unconventional look at the attractions industry. Follow on twitter @ThemesRenewed Joe lives in Sacramento, California with his wife, dog, and a ghost.
Share
Facebook
Twitter
Linkedin
Email
Print
WhatsApp
Pinterest
ReddIt
Tumblr
Previous articleDisney Announces New Water Play and Dining Options at Aulani Resort
Next articleGSCA Host Theater Installing New Screen and Projector