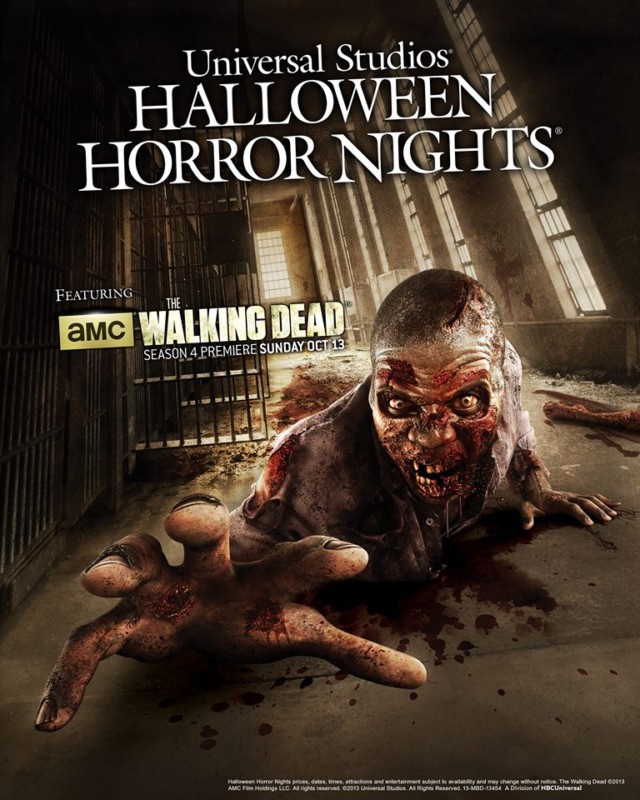 Universal City, CA and Orlando, FL, USA (July 25, 2013) — Fans with a voracious appetite for AMC’s “The Walking Dead” will have a chance to walk in the footsteps of human survivors when Universal Studios Hollywood and Universal Orlando Resort debut all new mazes inspired by Season 3 of the critically-acclaimed, award-winning television series at this year’s Halloween Horror Nights events beginning September 20.

The authentic and disturbingly real maze experiences will place “Halloween Horror Nights” guests at the heart of the show’s once impenetrable prison, the West Georgia Correctional Facility, now overrun by hordes of flesh-eating walkers.  The mazes at Universal Studios Hollywood and Universal Orlando will send guests cowering through the walker-infested wilderness that surrounds the prison and into the seemingly utopian town of Woodbury where gruesome secrets are concealed.

Universal Orlando is also dedicating its entire “Halloween Horror Nights” street experience to “The Walking Dead” – making this the first time ever that all of the scare zones throughout the park will be themed after a hit television series.  Guests brave enough to walk the streets of Universal Studios Florida will encounter iconic scenes from all three seasons of the hit show – including the perilous city of Atlanta and Hershel’s dismal barn – and fleets of blood-thirsty walkers who are hungry for their next victim… 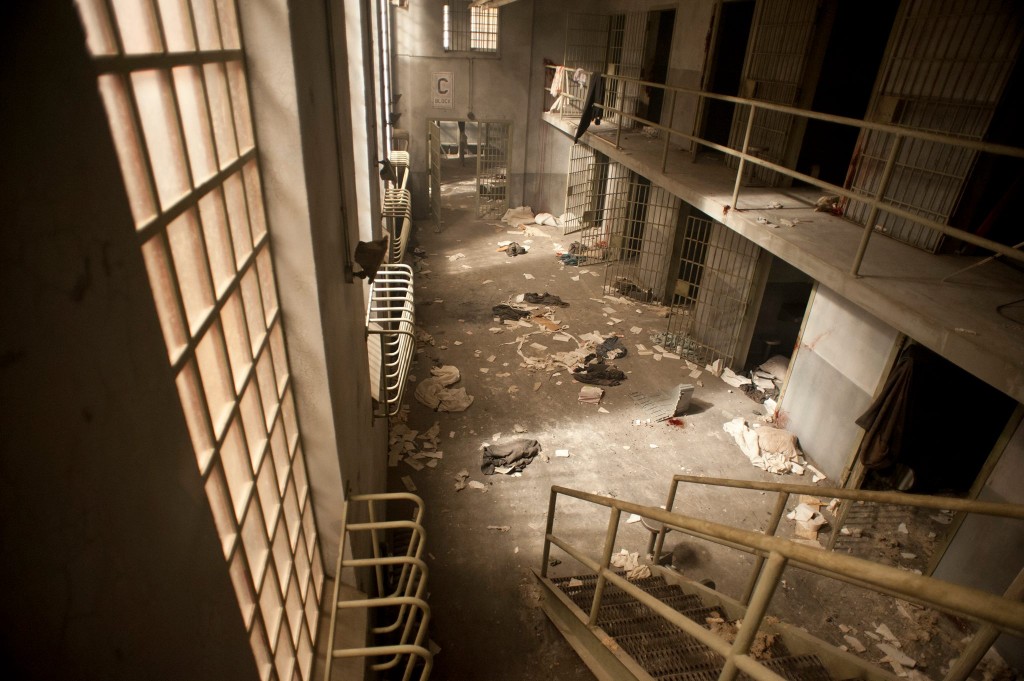 The Golden Globe-nominated, Emmy Award-winning series “The Walking Dead” is based on the graphic novel written by Robert Kirkman and published by Image Comics. The series tells the story of the months and years after a zombie apocalypse.  It follows a group of survivors, led by sheriff Rick Grimes, who travel in search of a safe and secure home. “The Walking Dead” is the first original cable series ever to end the broadcast TV season as the number-one show for adults 18-49.  AMC’s “The Walking Dead” returns for season 4 on Sunday, October 13 at 9pm ET/PT.

“What’s great about working with a property like ‘The Walking Dead’ is that each season presents new environments and characters for us to draw inspiration,” said John Murdy, Creative Director for Universal Studios Hollywood.  “With the prison as the main setting of Season 3, we seized this opportunity to recreate that very environment, down to the last detail, to be as genuine and authentic to the show as possible. Using movie-quality production value, our goal is to make guests feel as if they are mired in the world of blood-thirsty zombies, which is something you can only do at ‘Halloween Horror Nights.’”

“The goal is always to surround guests with authentic and terrifying experiences,” said Michael Aiello, Creative Development Director for Universal Orlando’s Entertainment team. “The combination of ‘The Walking Dead’ themed street experiences and the haunted maze will make it difficult for our guests to escape the hordes of ravenous walkers they’ve seen on their television.  The moment you pass through our gate, you become a survivor fighting for your life.”

Universal Studios’ “Halloween Horror Nights” events have a more than 20-year history of creating incredibly entertaining, horrifying Halloween experiences that are consistently rated the nation’s best.  The events on each coast feature highly-themed, disturbingly real, haunted mazes based on everything from films to nightmares — and streets filled with hundreds of specially trained “scareactors.”

Joe Kleimanhttp://wwww.themedreality.com
Raised in San Diego on theme parks, zoos, and IMAX films, InPark's Senior Correspondent Joe Kleiman would expand his childhood loves into two decades as a projectionist and theater director within the giant screen industry. In addition to his work in commercial and museum operations, Joe has volunteered his time to animal husbandry at leading facilities in California and Texas and has played a leading management role for a number of performing arts companies. Joe previously served as News Editor and has remained a contributing author to InPark Magazine since 2011. HIs writing has also appeared in Sound & Communications, LF Examiner, Jim Hill Media, The Planetarian, Behind the Thrills, and MiceChat His blog, ThemedReality.com takes an unconventional look at the attractions industry. Follow on twitter @ThemesRenewed Joe lives in Sacramento, California with his wife, dog, and a ghost.
Share
Facebook
Twitter
Linkedin
Email
Print
WhatsApp
Pinterest
ReddIt
Tumblr
Previous article
New World of Color Show Ties In With Disney’s Next Animated Feature “Frozen”
Next article
Discovery Place CEO John Mackay Announces Retirement