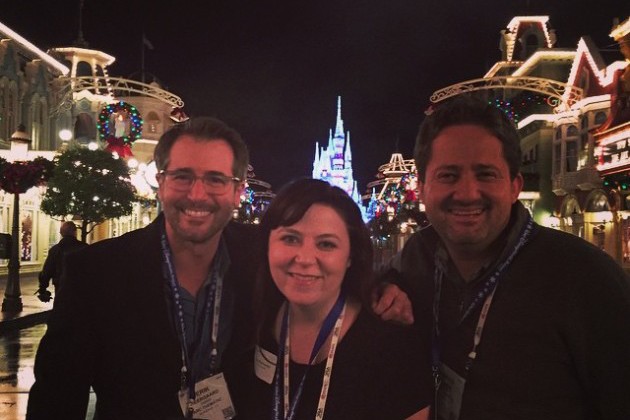 Burbank, CA, USA — Erik Neergaard of Themespace and Daren Ulmer of Mousetrappe proudly announce the formation of Arc Thematic Company, LLC., a new full service creative, design, media, and production group which will be based at the 14,000 square foot (1,300 square meter) studio which has been home to Mousetrappe since 2012. The two themed entertainment industry leaders, who have worked jointly on several projects over the past four years, began work on formation in June, and are excited to be revealing their new venture during the 2014 IAAPA Attractions Expo in Orlando, Florida this week.

Arc Thematic will offer master planning, concept, and development of theme park, museum, exhibition, and other location-based entertainment properties, as well as creative, design, and production of individual attractions, theaters, exhibits, and shows. Combined with Mousetrappe’s history of delivering the industry’s highest quality media designs and productions, Arc Thematic is a new venture that already has a track record of not only successful design experience but also significant award-winning delivered shows and attractions.

“We are so excited to share our plans, our capabilities, and the strength of our collective best-in-class creative and production skills. By fusing Erik’s company and experience with Mousetrappe’s, we have a studio that does extraordinary creative and concept but is also a proven production company that delivers and opens experiences routinely.” said Daren Ulmer.

While extremely experienced and imaginative, Arc Thematic is also focused and pragmatic. Because its core teams’ backgrounds are based in delivering and opening shows, parks, and attractions, they avoid unneeded creative iteration. Rather the goal is wildly creative concepts that also respect budget, schedule, and resource targets right from the beginning — ultimately creating effective and enduring guest experiences as well as productive, collaborative, and efficient partnerships along the way.

Erik Neergaard said, “Arc Thematic is not so much a new company, as it is the merging of two studios and their collective leadership, experience, and portfolios. Because we collaborated in the past, we already have a working relationship and successful projects together. Our shared commitment to outstanding creative that is also practical and efficient was clear from the start.”

Both Mousetrappe and Themespace, as well as Daren Ulmer and Erik Neergaard will continue to provide services at their already-established highest level. They also gain added resources and strengths from their association with Arc Thematic as it builds as grows as their new umbrella company.

Arc Thematic will soon announce its first projects, while looking forward to an exciting and productive first full year in 2015.

About Mousetrappe
Mousetrappe is a design and production company and develops and delivers media-rich experiences for a variety of clients and experiences. Founded in 2005 by Daren Ulmer, Mousetrappe has grown a reputation as the go-to media designer and producer for high quality, audience-connective, emotional experiences. Mousetrappe is also a global leader in mapped projection technologies and content for architectural and theatrical installations.

Key projects include Beyond All Boundaries at the National WWII Museum with Executive Producer Tom Hanks, Space Shuttle Atlantis at Kennedy Space Center Visitor Complex, Celebrate The Magic on Cinderella Castle at Walt Disney World, Once Upon a Time on Cinderella Castle at Tokyo Disney Resort, and the development of projects for Disney, Universal, Paramount, Herschend, Wanda Dalian, and many others.

About Themespace
Themespace is a Creative Consultancy and Design Firm for themed entertainment, museums and expos with a core focus on generating new ideas, forming experienced and effective design teams, and working alongside clients and other creative professionals to bring ideas into reality.Recent projects included Creative Producing services for the Wanda Wuhan Cultural Movie Park, Creative Direction for the Bollywood Park and Attraction Design for Motion Gate in Dubai.

About Erik Neergaard
Erik Neergaard is a dynamic creative professional with a long history in developing innovative and awarding winning entertainment branded
experiences all over the globe. Starting his themed entertainment career as a designer on the original Amazing Adventures of Spider-man ride at Universal Studios Islands of Adventure, Erik has since developed and guided studios and developers such as Sony, Dreamworks, Meraas, Wanda and Paramount.   Erik is the founder of Themespace, and much of his recent work is under construction in places like China and Dubai, while new developments are taking place in London.

About Daren Ulmer
Daren Ulmer is a creative director with a deep understanding of the creative and technical aspects of media, attractions, and shows. Daren began his career with Walt Disney Creative Entertainment at Disneyland, and has produced shows, attractions, and exhibits for Disney, Universal and Paramount theme parks. As the founder of industry-leading media design and production studio Mousetrappe, Daren was the creative producer for the media in the acclaimed Beyond All Boundaries cinematic experience at the National WWII Museum with Executive Producer Tom Hanks. Under Daren’s guidance, Mousetrappe has also become a leader in video mapping technologies, including projection mapping shows for multiple Disney theme parks.

Joe Kleimanhttp://wwww.themedreality.com
Raised in San Diego on theme parks, zoos, and IMAX films, Joe Kleiman would expand his childhood loves into two decades as a projectionist and theater director within the giant screen industry. In addition to his work in commercial and museum operations, Joe has volunteered his time to animal husbandry at leading facilities in California and Texas and has played a leading management role for a number of performing arts companies. Joe has been News Editor and contributing author to InPark Magazine since 2011. HIs writing has also appeared in Sound & Communications, LF Examiner, Jim Hill Media, and MiceChat. His blog, ThemedReality.com takes an unconventional look at the attractions industry. Follow on twitter @ThemesRenewed Joe lives in Sacramento, California with his fiancé, two dogs, and a ghost.
Share
Facebook
Twitter
Linkedin
Email
Print
WhatsApp
Pinterest
ReddIt
Tumblr
Previous articlePhotos From 2014 IAAPA Attractions Expo
Next articleNew Polin Technologies Offer Light and Sound Experiences for Waterslides