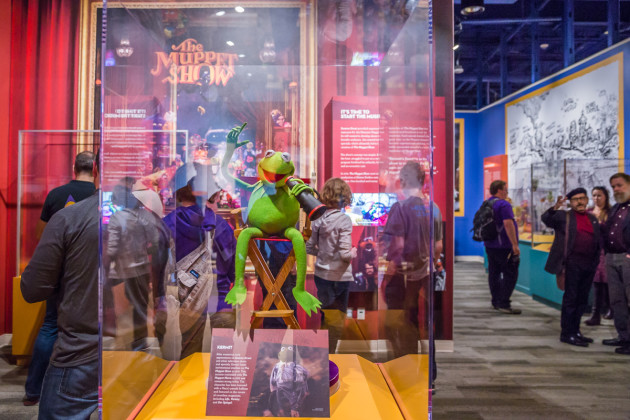 Los Angeles, CA, USA — Thinkwell Group, a global experience design and production agency specializing in the creation of theme parks, major attractions, live events, and museum exhibits around the world, has announced its role in designing, producing and assisting in the curation of a new museum for the Center for Puppetry Arts in Atlanta, Ga. The $14 million, 15,000-square-foot expansion, Worlds of Puppetry Museum, which opened on November 14, features the new Jim Henson Collection and Global Collection galleries.

“Thinkwell was tasked with the challenge of creating a space that would appeal to local, national and even global audiences; one that is visually stunning and functional for Jim Henson’s work and our international puppetry collection,” said Vincent Anthony, Center for Puppetry Arts founder. “The reality of the designs is even more than we had ever imagined. Thinkwell’s partnership in this process has been and will continue to be an integral part of the Museum’s success.”

Thinkwell worked in close collaboration with the Center and The Jim Henson Legacy, the organization dedicated to preserving and perpetuating Henson’s contributions, to create an interactive, engaging and contextually rich experience inside the Jim Henson Collection gallery. Housed in this gallery is the largest and most comprehensive collection of Henson puppets and artifacts in the world, which were donated to the Center by the Jim Henson Foundation in 2007. More than 500 artifacts will be on rotating display in the gallery, which includes some of Henson’s most famous and beloved puppets, including characters from Sesame Street, The Muppets, Labyrinth and The Dark Crystal. In addition to Henson’s well-known puppets are more classic works, including representations of the Seven Deadly Sins from the 1975 pilot of The Muppet Show and the oldest piece on display, Omar, from Henson’s 1955 television show Sam & Friends.

The Jim Henson Collection gallery also includes a re-creation of Jim Henson’s office that includes items found in his workspace, such as his desk and his signature red sketchbook, which includes reproductions of his illustrations and designs. There is also a re-creation of Henson’s workshop called The Creature Shop, which includes new interactives and gives visitors a chance to peek inside drawers filled with puppet components. A mock television studio fashioned with an interactive puppet area allows guests to play the part of a puppeteer, maneuvering their puppet on the stage while staying hidden from sight of the television cameras.

The Global Collection comprises the other half of the new Worlds of Puppetry Museum and features approximately 175 puppets from around the world. In addition to popular American puppets like Punch and Judy, the collection spans centuries and countries and includes everything from American marionettes to Japanese Bunraku puppets to Indonesian shadow puppets. Organized by continent, the artifacts allow visitors to immerse themselves in the cultural traditions of puppetry from Asia, Africa, Europe and the Americas. In addition to these displays, there are also new hands-on interactives, including an elaborate stage display that allows visitors to play with Sicilian rod marionettes outfitted as knights and a dragon.

Craig Hanna, Chief Creative Officer at Thinkwell said, “We’ve had the pleasure of working on many museum projects in our company’s history, but it’s hard to imagine something more fun and fascinating than exhibits on puppetry from around the world and the life and work of Jim Henson. It’s been such an honor to help shape this incredible collection and to create a space where visitors can enjoy the magic of puppetry for years to come.”

Joe Kleimanhttp://wwww.themedreality.com
Raised in San Diego on theme parks, zoos, and IMAX films, InPark's Senior Correspondent Joe Kleiman would expand his childhood loves into two decades as a projectionist and theater director within the giant screen industry. In addition to his work in commercial and museum operations, Joe has volunteered his time to animal husbandry at leading facilities in California and Texas and has played a leading management role for a number of performing arts companies. Joe previously served as News Editor and has remained a contributing author to InPark Magazine since 2011. HIs writing has also appeared in Sound & Communications, LF Examiner, Jim Hill Media, The Planetarian, Behind the Thrills, and MiceChat His blog, ThemedReality.com takes an unconventional look at the attractions industry. Follow on twitter @ThemesRenewed Joe lives in Sacramento, California with his wife, dog, and a ghost.
Share
Facebook
Twitter
Linkedin
Email
Print
WhatsApp
Pinterest
ReddIt
Tumblr
Previous articleBRC Imagination Arts Goes Large Scale with Times Square Miniature World Attraction
Next articleChance Rides Featured in Fidelity Bank Film Series

Pittsburgh’s Moonshot Museum opens, promoting the future of the space industry to guests