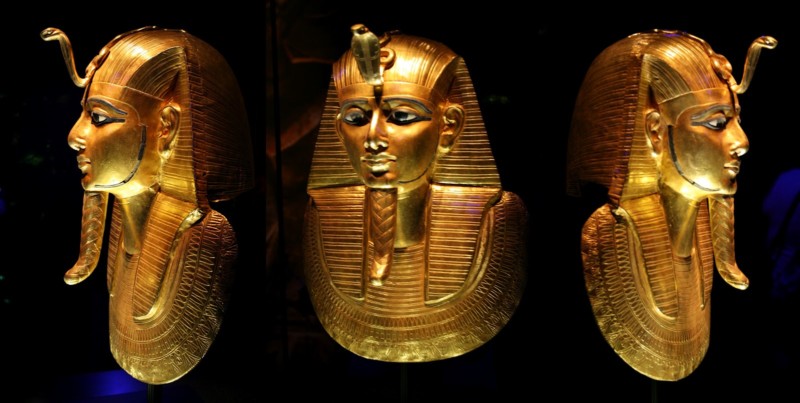 Three major exhibits at science centers on the US West Coast will be ending their runs on Sunday, January 6, 2012.

This exhibit features the largest collection of its kind ever assembled in the U.S. More than 150 priceless Egyptian artifacts illuminating the life of Cleopatra VII, one of the most provocative and powerful women in history, are on view including colossal statues, jewelry, coins and items from her sunken palace in Alexandria and other ancient sites that were significant during her life as queen.

Cleopatra: The Search for the Last Queen of Egypt immerses visitors in the experience of two present-day searches on land and sea for the elusive queen, which extend from the sands of Egypt to the depths of the Bay of Aboukir near Alexandria. The artifacts weigh in at about 30 tons in total, including two 16-foot granite statues of a Ptolemaic king and queen from the 4th – 3rd centuries B.C.

Mythbusters: The Explosive Exhibition seeks to “bust,” “confirm,” or judge inconclusive such pressing questions such as Will running in the rain keep you drier than walking? Or, can an airplane really take off from a conveyer belt moving the opposite direction? Guests learn about myths, the MythBusters and what experimenting is all about by participating in a series of fun, hands-on experiences and live demonstrations. Experiments cover topics such as flight, friction, gravity, speed and combustion.

More than 30 years after the first King Tut exhibition captivated Seattle, the magic and mystery of the boy king returns to the Pacific Northwest with an almost entirely new selection of treasures and more than twice the number of artifacts.  The exhibition features more than 100 artifacts from the tomb of King Tut and sites representing some of the most important rulers throughout 2,000 years of ancient Egyptian history. Most of these artifacts have never been on display in the United States before this exhibition.Come face-to-face with the largest image of King Tut ever unearthed – a 10-foot-statue of the pharaoh found at the remains of the funerary temple of two of his high officials.

See authentic objects from King Tut’s tomb including jewelry, furniture and statuary, as well as the boy king’s golden sandals – created specifically for the afterlife and found covering his feet when his mummified remains were discovered by Carter. An extraordinary gold death mask that covered the head and chest of the mummy of King Psusennes I is also showcased along with artifacts belonging to some of ancient Egypt’s most powerful rulers, such as Khufu, whose face adorns the Great Sphinx and who built one of the Great Pyramids, the only remaining structures of the seven wonders of the ancient world.

On August 24, AD 79, Mount Vesuvius erupted, burying the vibrant Roman city of Pompeii under volcanic ash for hundreds of years. Through January 13, the Colorado community has the opportunity to explore the daily life-and tragic end-of this thriving metropolis with A Day in Pompeii at the Denver Museum of Nature & Science.  Visitors uncover the treasures of a city steeped in legend, examine casts of the volcano’s victims frozen in their last moments, and discover the power of volcanoes past and present.

Pompeii’s rediscovery in the early 1700s-building by building, street by street, and block by block-became one of the greatest archaeological sites ever unearthed. A Day in Pompeii showcases more than 250 exceptional artifacts that lay buried in the ruins-including room-size frescoes, marble and bronze sculptures, jewelry, gold coins, and everyday household items. The 13,000-square-foot exhibition evokes the richness, culture, and bustle of daily life in Pompeii.

In addition to seeing rare artifacts, visitors will experience what it was like to live in ancient Pompeii as they enjoy digital re-creations, activity carts, and conversation with the Museum’s historical enactors.

Joe Kleimanhttp://wwww.themedreality.com
Raised in San Diego on theme parks, zoos, and IMAX films, InPark's Senior Correspondent Joe Kleiman would expand his childhood loves into two decades as a projectionist and theater director within the giant screen industry. In addition to his work in commercial and museum operations, Joe has volunteered his time to animal husbandry at leading facilities in California and Texas and has played a leading management role for a number of performing arts companies. Joe previously served as News Editor and has remained a contributing author to InPark Magazine since 2011. HIs writing has also appeared in Sound & Communications, LF Examiner, Jim Hill Media, The Planetarian, Behind the Thrills, and MiceChat His blog, ThemedReality.com takes an unconventional look at the attractions industry. Follow on twitter @ThemesRenewed Joe lives in Sacramento, California with his wife, dog, and a ghost.
Share
Facebook
Twitter
Linkedin
Email
Print
WhatsApp
Pinterest
ReddIt
Tumblr
Previous article
Knott’s Berry Farm to Update Classic Log Ride
Next article
California Supreme Court Rules in Favor of Cedar Fair in Injury Lawsuit