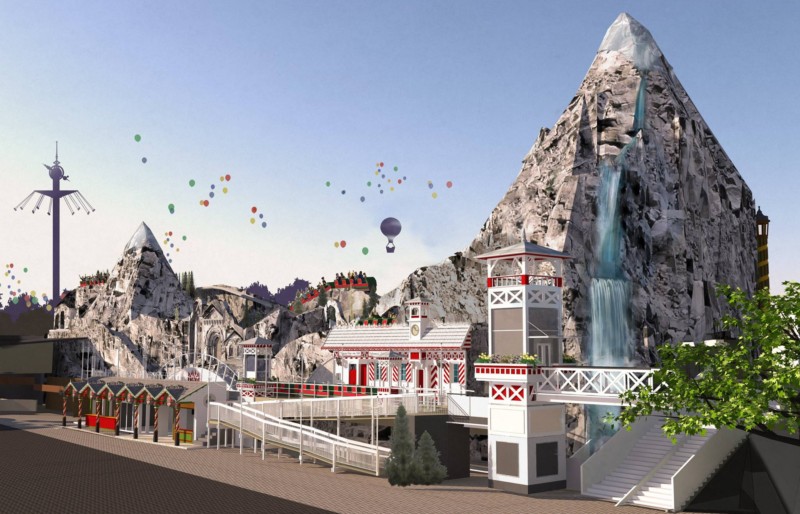 Copenhagen, Denmark (April 9, 2014) — Tivoli in Copenhagen starts its 172nd season at 11.00 am on April 10. In 2013, 4.2 million people visited Tivoli, one of the world’s oldest amusement parks and still Denmark’s most popular attraction. This season marks the old wooden roller coaster’s 100th anniversary and the Gardens will host the Nordic region’s largest classical festival as well as big international ballet guest performances. Live entertainment every day and a perfectly unique park are included in the deal.

To mark the world famous Roller Coaster’s 100th anniversary, its original peaks, which were previously the ride’s landmark, have been restored. They were removed in the 1920s at the request of the City of Copenhagen as it was not considered appropriate that the first thing visitors to the city saw when they left the main station was a mountain.

The highest of the new peaks, Mount Tivoli, rises 26 metres above the Gardens. In addition, there is a new ice grotto and Denmark’s biggest waterfall, the Alps Fall, with a total drop of over 20 metres. The familiar excitement of the ride and the ‘brakemen’ have been retained, but visitors can look forward to new experiences when the track slips between the peaks and into the mountain where a new ice grotto unfolds.

True to tradition, there will be 24 ambitious Friday Rock concerts and, again this year, there will be rousing music for our visitors during the Music Week, with a special musical theme each day. Friday Rock will be presenting, among other bands, Passenger (UK) on 11 July and Simple Minds (SCO) on 8 August. On 17 June, American guitarist and singer-songwriter John Mayer will be performing on the Open Air Stage.

The Tivoli Festival opens its doors

From May to September, classical tones will again resonate in the Tivoli Concert Hall, with the Tivoli Symphony Orchestra, as ever, the focal point of the Nordic region’s largest classical music festival. This year, the Tivoli Festival will offer 62 concerts, and there will be free admission to 48 of these with a Tivoli Season Pass. Among the highlights are the concert performance of Bellini’s opera, The Puritans, featuring American star tenor Lawrence Brownlee, and Tivoli’s anniversary concert with the Tivoli Symphony Orchestra and Maltese tenor Joseph Calleja. 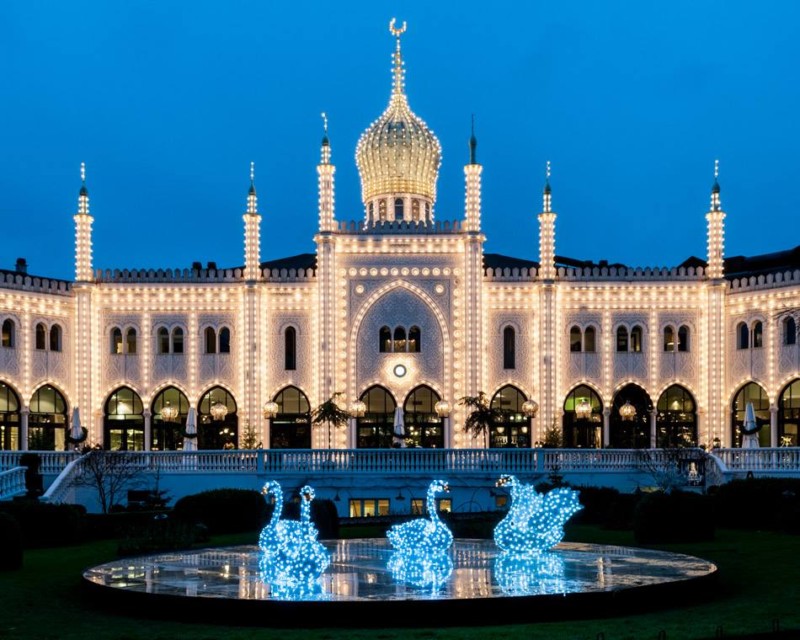 At the end of the summer, Tivoli will be launching a new ballet festival in the Tivoli Concert Hall. The ballet festival will be guested by the stellar Alvin Ailey American Dance Theater from New York and one of the world’s leading ballet companies, the British Royal Ballet. The latter will be accompanied by the Tivoli Symphony Orchestra whereas Tivoli’s Big Band will take part in one of the Ailey programmes. The ballet festival also includes a number of activities in the Gardens. In November, the Nutcracker will be restaged, with choreography by Peter Bo Bendixen and set design by Queen Margrethe.

Tivoli’s newest restaurant is called Mazzoli’s and is only one of almost 50 food and drink outlets. Mazzoli’s serves Italian food for all the family. Over the winter, designer restaurant Kähler knocked down walls so that guests can watch the chefs at work, and the restaurant has been given a new outdoor terrace. The Biergarten features a Tyrolean atmosphere and has a large new terrace with a view of Mount Tivoli.

Tivoli has numerous special days and events during the season when visitors get an extra experience on top of their visit. Among the events on offer this year are Denmark’s biggest Gospel Festival, Pippi Longstocking and Dogs’ Day. The Gardens also have room to accommodate the biggest Greenlandic cultural event outside Greenland and the Danish music schools’ 25th anniversary when over 6,000 children and young people from all corners of Denmark will come and give us a taste of their musical talents.

The famous Tivoli Fireworks Show will take place every Saturday at 23:45. 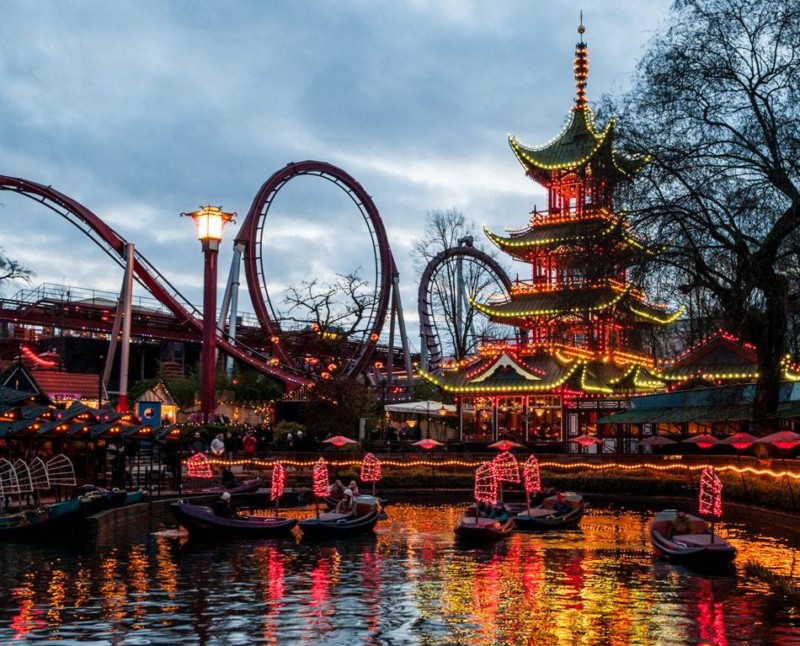 The Demon roller coaster, 28 metres high at its pinnacle, will be turning 10 in 2014. The ride has three cool loops and certainly makes most people scream.

The Orient, featuring the 63-metre high Golden Tower and Vertigo, Denmark’s craziest and fastest interactive ride, is one of the most popular areas in Tivoli. The Orient will be turning 15 this year.

Adam Price wrote the following about Færgekroen (the Ferry Boat Inn): “A beautiful southern Jutland fishing village from 1934 with an idyllic location in the middle of the Tivoli Lake. It would be difficult to get closer to the heart of Danish culture”. This year Færgekroen will be turning 80.

Grøften, which has quite rightly attained iconic status and is one of Copenhagen’s most popular restaurants, is embarking on its 140th summer season.

The world’s oldest boys’ guard and one of the best music educations for children in Denmark. This year the Tivoli Boys’ Guard will turn 170.

Joe Kleimanhttp://wwww.themedreality.com
Raised in San Diego on theme parks, zoos, and IMAX films, InPark's Senior Correspondent Joe Kleiman would expand his childhood loves into two decades as a projectionist and theater director within the giant screen industry. In addition to his work in commercial and museum operations, Joe has volunteered his time to animal husbandry at leading facilities in California and Texas and has played a leading management role for a number of performing arts companies. Joe previously served as News Editor and has remained a contributing author to InPark Magazine since 2011. HIs writing has also appeared in Sound & Communications, LF Examiner, Jim Hill Media, The Planetarian, Behind the Thrills, and MiceChat His blog, ThemedReality.com takes an unconventional look at the attractions industry. Follow on twitter @ThemesRenewed Joe lives in Sacramento, California with his wife, dog, and a ghost.
Share
Facebook
Twitter
Linkedin
Email
Print
WhatsApp
Pinterest
ReddIt
Tumblr
Previous article
LEGOLAND Windsor Signs with accesso for Qsmart Smartphone-Based Queuing Solution
Next article
Aquatica Orlando Completes Final Slide on Orlando’s Tallest Drop Tower