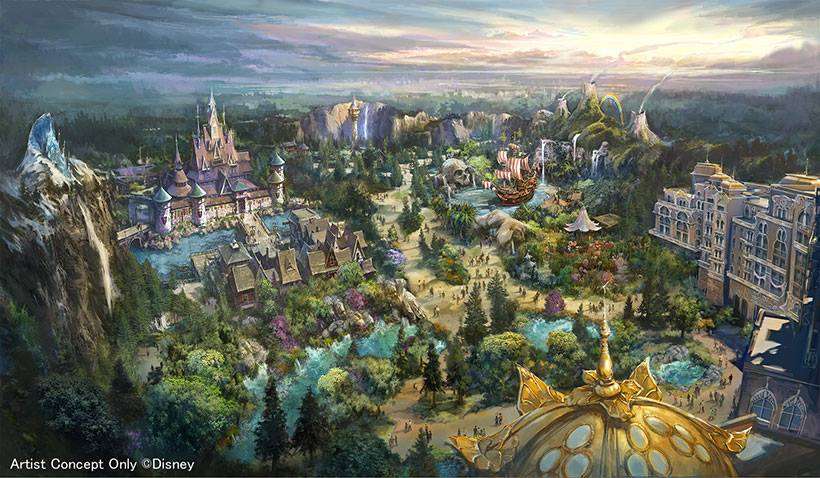 Oriental Land Co., Ltd. has announced that an agreement has been reached with The Walt Disney Company on plans for developing a new themed port at Tokyo DisneySea®, which will also include a new Disney hotel. With this agreement and upon the completion of the Tokyo DisneySea and Tokyo Disneyland® expansions, the licenses for the Disney theme parks and other key licenses between The Walt Disney Company and Oriental Land, which currently run until 2046, will be extended to 2076.

The expansion at Tokyo DisneySea will create an eighth themed port that is inspired by a magical spring leading to a world of Disney fantasy. The themed port will be comprised of three distinct areas recreating the worlds of the Disney films Frozen, Tangled and Peter Pan, as well as a deluxe hotel with a one-of-a-kind luxury wing that will be the most luxurious accommodations ever at Tokyo Disney Resort®. Also, four new attractions will be developed just for this expansion. Operations are projected to begin in fiscal year 2022. Oriental Land will invest about 250 billion yen in this project, the largest additional investment to date for existing facilities. 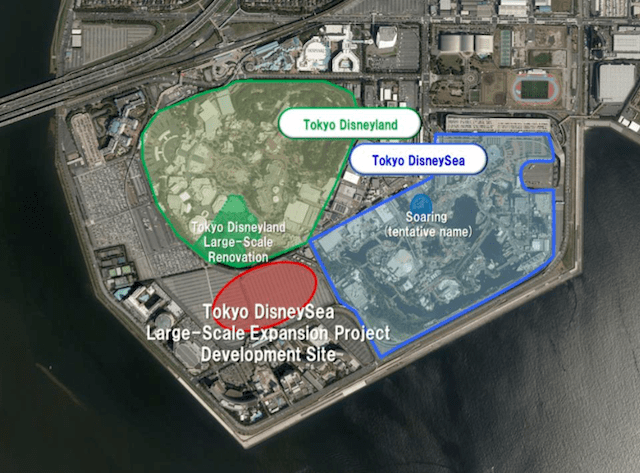 Together with the large-scale enhancement of Tokyo Disneyland, scheduled to start operations in 2020, this new project marks a major step in the evolution of Tokyo Disney Resort into a one-of-a-kind themed resort where Guests will enjoy even more magical experiences.

In the 35 years since the Grand Opening of Tokyo Disneyland, Japan has undergone rapid growth and Oriental Land has consistently offered new experiences that can be shared by Guests of all ages that they can only have at Tokyo Disney Resort.

Themed to magical springs that lead to a world of Disney fantasy, the new port will consist of three areas inspired by Disney films that are beloved by Guests of all ages—Frozen, Tangled and Peter Pan. By entering the new themed port and exploring its numerous springs, Guests will discover Anna and Elsa’s kingdom of Arendelle; the forest and tower where Rapunzel lives; and Neverland—the home of Peter Pan, Tinker Bell and the Lost Boys. Guests will be able to experience these wonderful, fantastical worlds as no one has before.

The four attractions and the Disney hotel have been newly developed expressly for this project. This new themed port is certain to enhance the appeal of Tokyo DisneySea, the only Disney Park themed to the myths and legends of the sea. 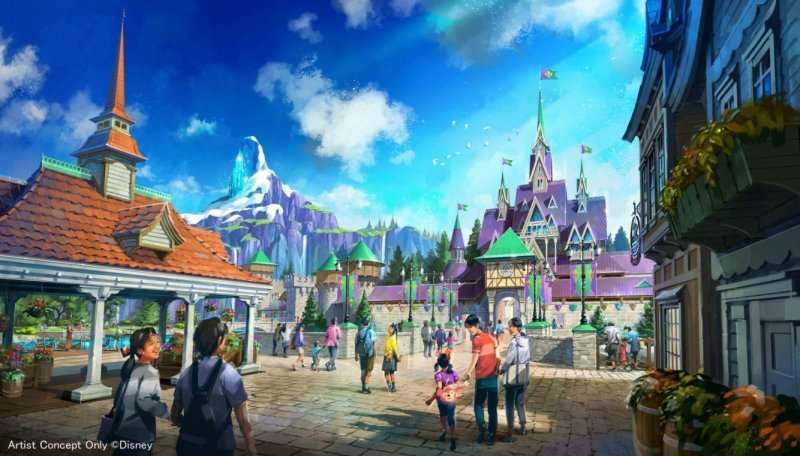 The Frozen area is set in Arendelle after the events in the film when Queen Elsa has embraced her magical power to control snow and ice. She has since opened the castle gates so that Guests can freely visit the Kingdom. Located here will be a heartwarming attraction that tells the story of Elsa and her beloved sister, Anna. Guests will board boats and experience the sisters’ heartfelt journey while enjoying iconic songs from the film and encountering surprising thrills. Also located in this area will be a restaurant set inside Arendelle Castle at the foot of beautiful, snow-capped mountains. 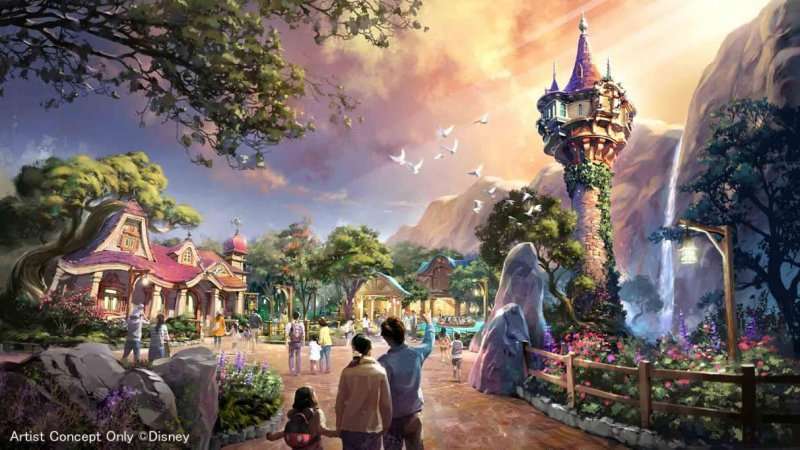 Guests visiting the Tangled area will discover Rapunzel’s tower rising above in a charming forest. The area will include an attraction that follows Rapunzel to the lantern festival and a restaurant inspired by the hideout of the humorous band of thugs who appeared in the film. In the attraction, Guests will board gondolas for a romantic boat tour of Rapunzel’s “best day ever” as she journeys with Flynn to the lantern festival. Countless flickering lanterns illuminate the attraction’s climactic scene while Rapunzel and Flynn sing an iconic song from the film, building to an unforgettable finale. 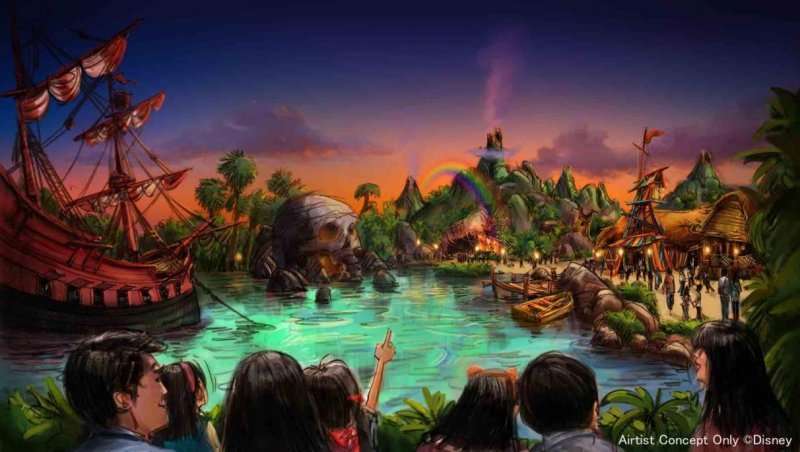 Home to two attractions and a restaurant, the Neverland area will feature landmarks that make that fantastical world so memorable, including verdant mountains, Captain Hook’s pirate ship and Skull Rock. One attraction will fly Guests over the jungles of Neverland into a battle with Captain Hook and his crew of pirates. Guests will join Peter Pan in an adventure to rescue Wendy’s younger brother, John, who has been kidnapped by Captain Hook and his pirates. Guests board boats and follow the Lost Boys down a river. When Tinker Bell sprinkles the boats with pixie dust, Guests find themselves flying through Neverland on an unprecedented adventure that features iconic music and dynamic 3D imagery of the characters from the film.

A second attraction immerses Guests in the oversized world of Pixie Hollow where Tinker Bell and her fairy friends live and work. The restaurant is inspired by the Lost Boys and their hideout, affording lovely views of Neverland that Guests can enjoy while they dine. 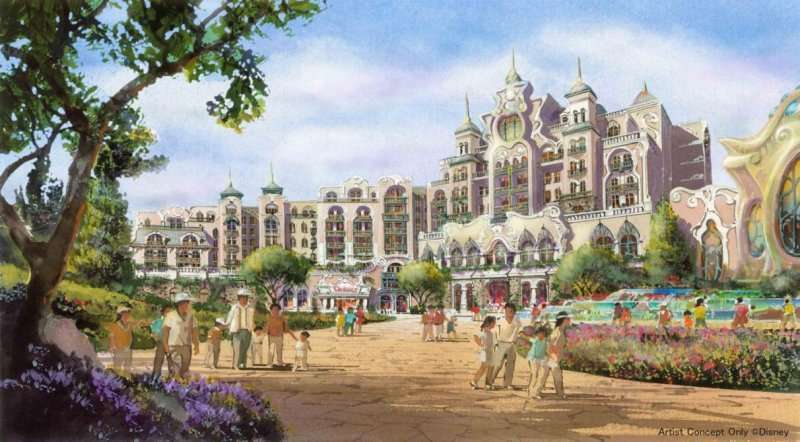 Themed to Disney fantasy, the new Disney hotel will be located inside the Park. The hotel will rise above and around the magical springs that serve as the core of the new themed port’s story. Park-facing rooms will provide beautiful views of the port’s majestic landscape, affording Guests a magical experience that can only be had at this hotel. The Disney hotel will offer 475 deluxe-type and luxury-type guest rooms, with the latter providing the finest accommodations in Tokyo Disney Resort. A merchandise shop that helps share the story of the magical springs will be found on the hotel’s first floor, facing the Park.

Joe Kleimanhttp://wwww.themedreality.com
Raised in San Diego on theme parks, zoos, and IMAX films, InPark's Senior Correspondent Joe Kleiman would expand his childhood loves into two decades as a projectionist and theater director within the giant screen industry. In addition to his work in commercial and museum operations, Joe has volunteered his time to animal husbandry at leading facilities in California and Texas and has played a leading management role for a number of performing arts companies. Joe previously served as News Editor and has remained a contributing author to InPark Magazine since 2011. HIs writing has also appeared in Sound & Communications, LF Examiner, Jim Hill Media, The Planetarian, Behind the Thrills, and MiceChat His blog, ThemedReality.com takes an unconventional look at the attractions industry. Follow on twitter @ThemesRenewed Joe lives in Sacramento, California with his wife, dog, and a ghost.
Share
Facebook
Twitter
Linkedin
Email
Print
WhatsApp
Pinterest
ReddIt
Tumblr
Previous articleEyes on the Asian market
Next articleAECOM’s Chris Yoshii forecasts 10 more years of Asia Pacific growth