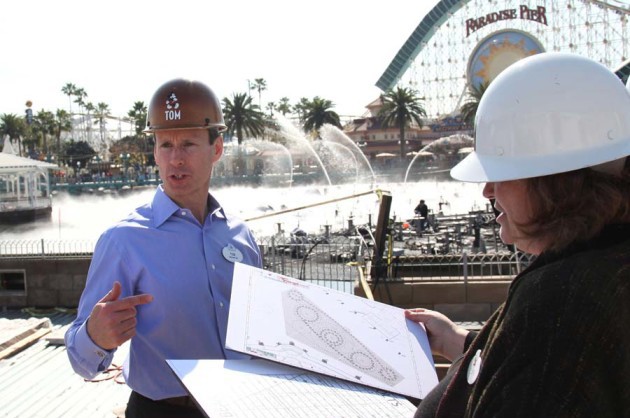 A 25-year Disney veteran, Mr. Staggs is Chairman, Walt Disney Parks and Resorts, overseeing the strategy, operations and creative development of the company’s iconic travel and leisure businesses. He will assume the role of Chief Operating Officer immediately, while continuing to lead Parks and Resorts until a successor is named. Disney’s senior management team, including all business segment leaders, will report jointly to Mr. Iger and Mr. Staggs, with the exception of the Chief Financial Officer, General Counsel, Chief Communications Officer and Chief Human Resources Officer, who will continue to report directly to Mr. Iger.

“Tom is an incredibly experienced, talented and versatile executive who has led Parks and Resorts during a time of unprecedented growth and expansion, including the construction of Shanghai Disney Resort. His proven ability to lead a business as well as his successful tenure as Disney’s former CFO make him an ideal Chief Operating Officer, expanding his portfolio into all the company’s businesses,” Mr. Iger said.

“It’s a privilege to step into this role, and I am humbled and honored by the opportunity. I look forward to working more closely with Bob and the talented senior management team across the company to continue to build Disney’s future through unparalleled creativity, innovative technology and global expansion,” Mr. Staggs said.

Since 2010, Mr. Staggs has led Parks and Resorts’ global team of more than 130,000 Cast Members, Crew Members and Imagineers, with the segment delivering record revenue, profit and attendance levels. In addition to overseeing the development of Shanghai Disney Resort, and a new Avatar-themed land at Disney’s Animal Kingdom Park, during Tom’s tenure, Disney has launched two new cruise ships; opened Aulani, a Disney Resort & Spa, in Hawai‘i; added three new lands at Hong Kong Disneyland; doubled the size of Fantasyland at the Magic Kingdom; and completed a multi-year expansion of the Disneyland Resort with the addition of Cars Land and Buena Vista Street at Disney California Adventure Park.

Prior to that, Mr. Staggs served as Senior Executive Vice President and Chief Financial Officer of The Walt Disney Company. He played a critical role in the execution of the acquisitions of Capital Cities/ABC, Pixar Animation Studios and Marvel Entertainment. As CFO for twelve years, he spearheaded the realignment of Disney’s performance goals toward the combination of profit growth and strong long-term capital returns and free cash flow.  He has been praised by Wall Street for his financial and communications skills, and was consistently voted the entertainment industry’s No. 1 CFO by Institutional Investor magazine.

Mr. Staggs joined Disney in 1990 as Manager of Strategic Planning and quickly advanced through a series of positions of increased responsibility, leading to his appointment as Chief Financial Officer in 1998. Before joining Disney, he worked in investment banking at Morgan Stanley & Co.

Mr. Staggs earned a bachelor’s degree in business from the University of Minnesota’s Carlson School of Management and an MBA from Stanford Graduate School of Business.

Joe Kleimanhttp://wwww.themedreality.com
Raised in San Diego on theme parks, zoos, and IMAX films, InPark's Senior Correspondent Joe Kleiman would expand his childhood loves into two decades as a projectionist and theater director within the giant screen industry. In addition to his work in commercial and museum operations, Joe has volunteered his time to animal husbandry at leading facilities in California and Texas and has played a leading management role for a number of performing arts companies. Joe previously served as News Editor and has remained a contributing author to InPark Magazine since 2011. HIs writing has also appeared in Sound & Communications, LF Examiner, Jim Hill Media, The Planetarian, Behind the Thrills, and MiceChat His blog, ThemedReality.com takes an unconventional look at the attractions industry. Follow on twitter @ThemesRenewed Joe lives in Sacramento, California with his wife, dog, and a ghost.
Share
Facebook
Twitter
Linkedin
Email
Print
WhatsApp
Pinterest
ReddIt
Tumblr
Previous articleElectrosonic Expands in UK with Regional Office in Aberdeen
Next articleBIG & DIGITAL Signs Exclusive Distribution of “AWAKE: The Life of Yoganada” to Museums and Stand-Alone Attractions