Las Vegas, NV, USA (Jan. 17, 2014) — Bob Athey, owner and CEO of All Things Integrated(ATI) in Las Vegas, has announced today that Tommy Bridges, has been promoted to Executive Vice President and Director, of the 3-year old Las Vegas company. Bridges most recently served as the Vice President of Sales, and will continue to report to Athey, in this position. 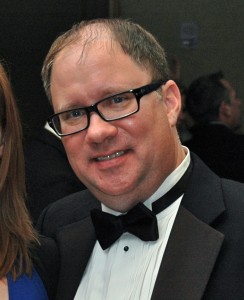 In announcing this appointment, Athey said, “Tommy has forged significant relationships in the themed entertainment market, and has overseen the opening of our Asia office in Shanghai, and has contributed greatly to our sales growth. ATI continues to grow in theUSA, and internationally under his leadership and vision, and with his experience in the AV, casino, nightlife, and themed entertainment markets. He is a brilliant deal-maker, and a polished manager. Plus, he is a 27-year veteran in the AV industry, and knows the business well.”

Bridges joined ATI in 2013, as Vice President of Sales. Prior to joining ATI, he held a director position with General Projection Systems and a sales management position with Alcorn McBride. He has worked with Walt Disney Imagineering, Universal Studios,major Las Vegas casinos, and many of the premier theme parks, visitor attractions, and museums throughout the world. In 2012, he was elected to the International Board of the Themed Entertainment Association (TEA).

In related news, ATI has appointed Lisa J. Briscoe as Senior Project Designer. She holds a Master of Architecture degree from the University of Nevada, and a Bachelor of Science degree, from Colorado State University.Lisa was a former Project Manager and Senior Designer at Westar Architectural Group,Inc, and prior Architectural Drafter with Paul Steelman Design Group (PSDG) Inc. in Las Vegas.

Joe Kleimanhttp://wwww.themedreality.com
Raised in San Diego on theme parks, zoos, and IMAX films, Joe Kleiman would expand his childhood loves into two decades as a projectionist and theater director within the giant screen industry. In addition to his work in commercial and museum operations, Joe has volunteered his time to animal husbandry at leading facilities in California and Texas and has played a leading management role for a number of performing arts companies. Joe has been News Editor and contributing author to InPark Magazine since 2011. HIs writing has also appeared in Sound & Communications, LF Examiner, Jim Hill Media, and MiceChat. His blog, ThemedReality.com takes an unconventional look at the attractions industry. Follow on twitter @ThemesRenewed Joe lives in Sacramento, California with his fiancé, two dogs, and a ghost.
Share
Facebook
Twitter
Linkedin
Email
Print
WhatsApp
Pinterest
ReddIt
Tumblr
Previous articleGetting in the Castle: making connections in the themed entertainment industry
Next articleBuilding upon dreams at Give Kids the World Village