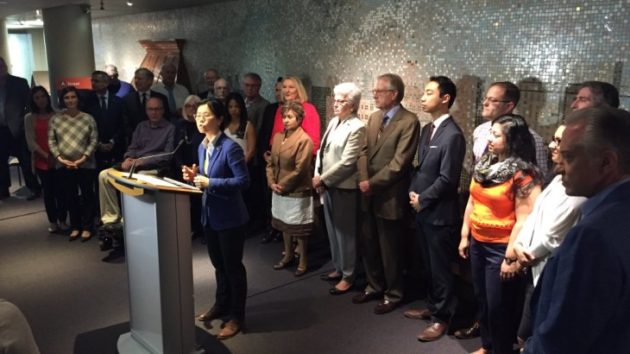 Toronto, ON, Canada — An independent, privately-funded feasibility study has found that Expo 2025 could deliver a $4.37 billion boost to the national GDP and deliver $1.26 billion in tax revenue to all three levels of government.   The economic benefits and proposed social & cultural infrastructure far outweigh the projected incremental cost of staging Expo which is estimated at $1.91 billion.

In June, City Council voted unanimously to commission the analysis.  It examined the incremental costs of staging Expo, the suitability of the Port Lands as a site, as well as the economic benefits and potential legacy for Toronto, Ontario and Canada.

The impartial, independent study was carried out by Pricewaterhouse Coopers, Arup – a global firm of designers and engineers, and Lord Cultural Resources.  It was conducted at no cost to taxpayers as it was completely funded by a group of prominent businesspeople led by Ken Tanenbaum.

– Expo’s anticipated direct revenues from ticket sales, sponsorships and other sources would be $1.64 Billion, enough to cover operating costs with a surplus
– Expo would produce more than 50-thousand person-years of employment
– Expo would draw 30 million visits to the site, including 9 million incremental visitors who would come to Toronto specifically to attend the event
– The redeveloped Port Lands is a viable site and Expo would leverage the substantial planning work already done on the initiative to maximize the benefits from a visionary urban renewal project that is underway
– The detailed study is scheduled to be made public on October 19th and to be discussed in Executive Committee on October 26.

“This report sends a clear and inspiring message:  Expo 2025 is an extraordinary opportunity that will lift us all.  Let’s do it,” said Claire Hopkinson, Director & CEO, Toronto Arts Council & Toronto Arts Foundation

“Expo 2025 would give a tremendous boost to the fast-growing innovation sector in the Toronto-Waterloo Corridor. We think it is a once in a lifetime opportunity to market our city, province and nation to the world.”
-Jordan Banks, Managing Director, Facebook and Instagram Canada

“Beyond important local benefits like job creation, tourism and urban development, TMX Group believes that Expo 2025 Canada can serve to globally differentiate, redefine and rebrand our city and country as innovative leaders and truly demonstrate Canadian ingenuity and resourcefulness. Expo 2025 Canada is an incredible opportunity for the Toronto region, province and country and one that we should seize with confidence and purpose.
-Nicholas Thadaney, President and CEO, Global Equity Capital Markets, TMX Group

“Yappn is excited to support Toronto’s Expo 2025 bid. We strive to bring people together by removing language barriers and together with the City of Toronto we can make Expo 2025 the most open and collaborative Expo ever.”
-Ed Karthaus, President and CEO, Yappn Corp.

“Beanfield is thrilled to be part of a potential World Expo in Toronto. The world needs to see how much our incredible city and country have to offer in terms of talent, culture and opportunity”
-Chris Amendola, President, Beanfield Metroconnect

“Previous Canadian expositions, held in Montreal and Vancouver, prove the enormous economic and urban development potential of such events. We support the City of Toronto’s due diligence and assessment process.”
-Jan De Silva, President and CEO, Toronto Board of Trade.

Joe Kleimanhttp://wwww.themedreality.com
Raised in San Diego on theme parks, zoos, and IMAX films, InPark's Senior Correspondent Joe Kleiman would expand his childhood loves into two decades as a projectionist and theater director within the giant screen industry. In addition to his work in commercial and museum operations, Joe has volunteered his time to animal husbandry at leading facilities in California and Texas and has played a leading management role for a number of performing arts companies. Joe previously served as News Editor and has remained a contributing author to InPark Magazine since 2011. HIs writing has also appeared in Sound & Communications, LF Examiner, Jim Hill Media, The Planetarian, Behind the Thrills, and MiceChat His blog, ThemedReality.com takes an unconventional look at the attractions industry. Follow on twitter @ThemesRenewed Joe lives in Sacramento, California with his wife, dog, and a ghost.
Share
Facebook
Twitter
Linkedin
Email
Print
WhatsApp
Pinterest
ReddIt
Tumblr
Previous articleThinkwell Group Re-envisions Richard Nixon Presidential Library and Museum for New Generations of Visitors
Next articleP&P Projects Creates Viking Adventure at Djurgården