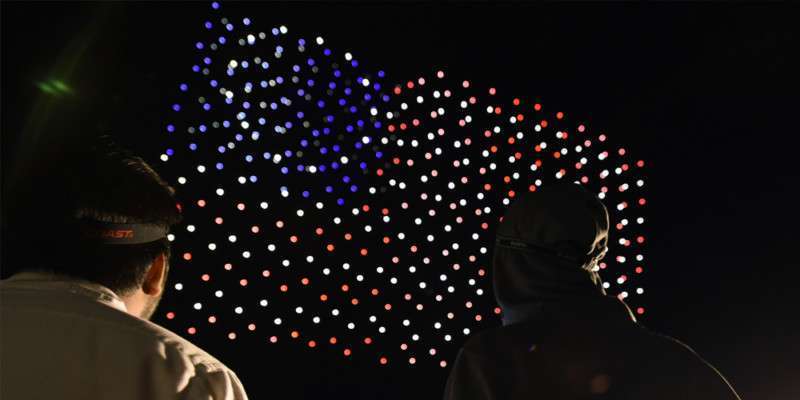 Travis Air Force Base in Fairfield, California, collaborated with Intel to replace a traditional Independence Day fireworks display with an Intel® Shooting Star™ drone light show. In celebration of July Fourth and Travis Air Force Base’s 75th anniversary, 500 Intel Shooting Star drones danced across the nighttime sky in a choreographed aerial routine that honors active military and veterans. The show, originally scheduled for July 4, was rescheduled one day later due to high winds.

Travis Air Force Base collaborated with Intel to recognize active military, veterans and participants of the Exceptional Family Member Program (EFMP). Travis Air Force Base has one of the largest Air Force EFMP populations. The program’s mission is to identify medical and educational service requirements of family members in support of active-duty sponsor reassignment and civilian employment overseas.

This drone light show was a more inclusive July Fourth celebration that could be enjoyed by all families, especially those with sensitives to the sounds of firework explosions.

“The story of the Air Force is a story of innovation. With Travis in close proximity to Silicon Valley, the base strives to develop relationships and to play an active role in Northern California’s innovation ecosystem,” said Col. John Klein, Travis Air Force Base installation commander. “For our 75th anniversary and as a way of saying thank you for the unprecedented community support, we wanted to treat our friends and family to a special Independence Day celebration – Intel’s vision to reimagine fireworks with cutting-edge drone technology was a natural fit for our airmen and audience.”

“We are excited to collaborate with the Travis Air Force Base to celebrate the July Fourth holiday by bringing a new form of nighttime entertainment to honor the military and their families,” said Anil Nanduri, vice president and general manager of the Intel drone teaam. “I am looking forward to seeing the joy and excitement that our drone light show brings to the spectators.”

Joe Kleimanhttp://wwww.themedreality.com
Raised in San Diego on theme parks, zoos, and IMAX films, InPark's Senior Correspondent Joe Kleiman would expand his childhood loves into two decades as a projectionist and theater director within the giant screen industry. In addition to his work in commercial and museum operations, Joe has volunteered his time to animal husbandry at leading facilities in California and Texas and has played a leading management role for a number of performing arts companies. Joe previously served as News Editor and has remained a contributing author to InPark Magazine since 2011. HIs writing has also appeared in Sound & Communications, LF Examiner, Jim Hill Media, The Planetarian, Behind the Thrills, and MiceChat His blog, ThemedReality.com takes an unconventional look at the attractions industry. Follow on twitter @ThemesRenewed Joe lives in Sacramento, California with his wife, dog, and a ghost.
Share
Facebook
Twitter
Linkedin
Email
Print
WhatsApp
Pinterest
ReddIt
Tumblr
Previous article
Cirque du Soleil expands live offerings with acquisition of VStar Entertainment and Cirque Dreams
Next article
Brickbeard’s Bounty returns to port at LEGOLAND Florida Resort