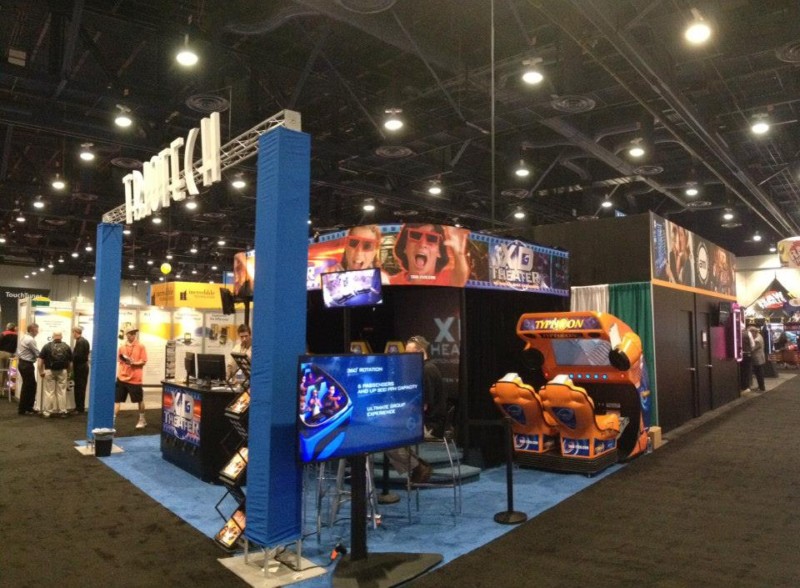 [quote]Today, the Typhoon remains a solid part of our portfolio” — Ernest Yale, President and CEO of TRIOTECH[/quote]

Montreal, QB, Canada — Montréal based TRIOTECH, a leader in out-of-home multimedia immersive and interactive attractions, has hit another landmark by shipping its 1,000th unit of its perennial best seller Typhoon coin-op simulator. This coincides with the 2014 AMOA Amusement Expo and IAAPA’s FEC Conference, which both took place this month in Las Vegas, NV, USA.

The Typhoon has been the cornerstone coin-op product for TRIOTECH in the Amusement segment particularly for Family Entertainment Centers. It allowed TRIOTECH to develop technology that was ground-breaking at the time and that even today is often imitated but never quite equalled. “They say imitation is the ultimate form of flattery” said Ernest Yale, President and CEO of TRIOTECH.

The first Typhoons came on the market in December 2008. Its motion technology has been a springboard for TRIOTECH’s expansion into larger footprint attractions such as its XD Theater, its award winning XD Dark Ride, and Interactive Dark Rides. “ added Mr. Yale. The Typhoon is an ultimate coin-op immersive mini-attraction that offers exclusive motion and wind special effects that deliver a fun thrill for guests of all ages.

Joe Kleimanhttp://wwww.themedreality.com
Raised in San Diego on theme parks, zoos, and IMAX films, Joe Kleiman would expand his childhood loves into two decades as a projectionist and theater director within the giant screen industry. In addition to his work in commercial and museum operations, Joe has volunteered his time to animal husbandry at leading facilities in California and Texas and has played a leading management role for a number of performing arts companies. Joe has been News Editor and contributing author to InPark Magazine since 2011. HIs writing has also appeared in Sound & Communications, LF Examiner, Jim Hill Media, and MiceChat. His blog, ThemedReality.com takes an unconventional look at the attractions industry. Follow on twitter @ThemesRenewed Joe lives in Sacramento, California with his fiancé, two dogs, and a ghost.
Share
Facebook
Twitter
Linkedin
Email
Print
WhatsApp
Pinterest
ReddIt
Tumblr
Previous articleSeaWorld’s Aquatica Tops Off Orlando’s Tallest Drop Tower Slide
Next articleChicago Goes Full TILT on 94th Floor of John Hancock Tower