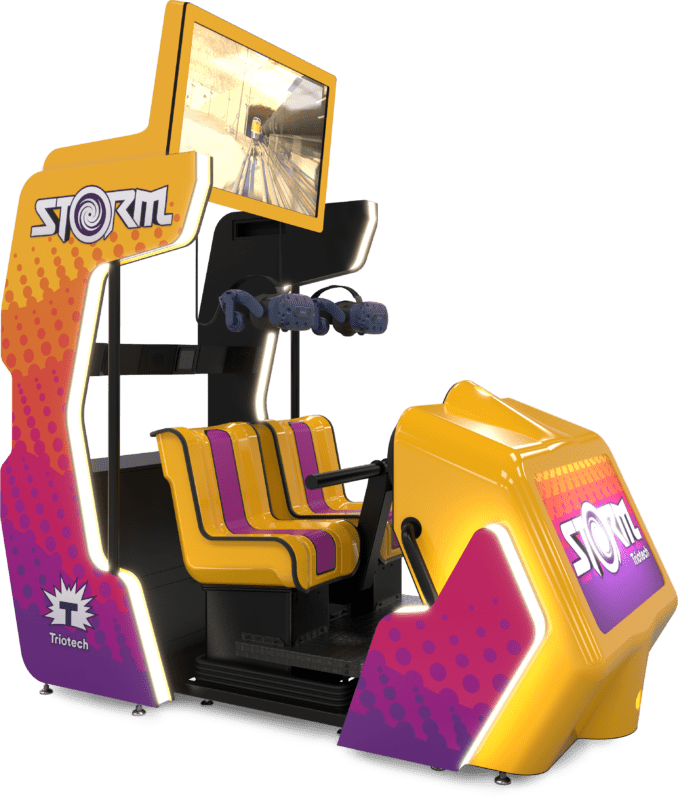 Following its predecessors, the Typhoon and the Mad Wave Theater, both best-selling coin-op simulators that still populate most FECs and arcades around the world, Triotech is now launching the Storm™. A unique interactive VR coin-op game that features two competing players sitting side-by-side on motion seats.

“What is unique about the Storm™ is that it is interactive VR but guests do not hold a controller, they play by moving their hands and arms around,” stated Mr. Ernest Yale, Founder, President & CEO of Triotech. He added, “it’s not only a thrill ride but also a side-by-side competition which players always enjoy”.

Featuring a world-premiere for coin-op VR games, players interact by simple hand and arm motion, there is no controller in their hands. This device-free interactivity in a VR coin-op simulator is unique. Triotech’s Storm™ comes with wind effects, motion, and exclusive content developed by Triotech.

Joe Kleimanhttp://wwww.themedreality.com
Raised in San Diego on theme parks, zoos, and IMAX films, InPark's Senior Correspondent Joe Kleiman would expand his childhood loves into two decades as a projectionist and theater director within the giant screen industry. In addition to his work in commercial and museum operations, Joe has volunteered his time to animal husbandry at leading facilities in California and Texas and has played a leading management role for a number of performing arts companies. Joe previously served as News Editor and has remained a contributing author to InPark Magazine since 2011. HIs writing has also appeared in Sound & Communications, LF Examiner, Jim Hill Media, The Planetarian, Behind the Thrills, and MiceChat His blog, ThemedReality.com takes an unconventional look at the attractions industry. Follow on twitter @ThemesRenewed Joe lives in Sacramento, California with his wife, dog, and a ghost.
Share
Facebook
Twitter
Linkedin
Email
Print
WhatsApp
Pinterest
ReddIt
Tumblr
Previous articleWorlds of Fun’s Winterfest joining with Sporting KC and Victory Project to help children fighting cancer
Next articleS&S introduces new type of coaster experience with AXIS Coaster