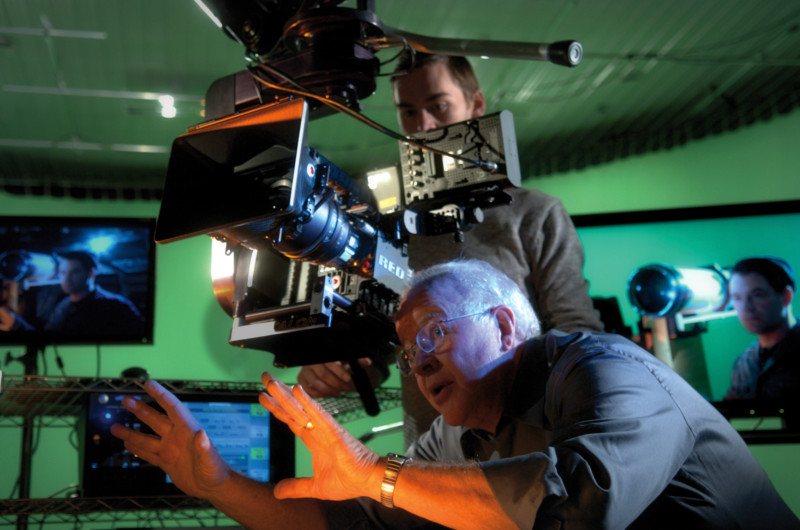 [quote]We are pushing the envelope to condense movie production time, intending to make films at a fraction of current blockbuster costs, yet with a much more powerful result on the screen.” — Douglas Trumbull[/quote]

UFOTOG is a dramatic short story about a lone man attempting to photograph UFOs. Trumbull felt that it would be ideal to premiere UFOTOG at Paul Allen’s iconic Seattle Cinerama Theater as the headlining event at the annual Science Fiction Film Festival Sunday May 11, 2014, in conjunction with special screenings of 2001: A SPACE ODYSSEY and CLOSE ENCOUNTERS OF THE THIRD KIND, both of which have alien contact stories. In addition, Trumbull will introduce his movie BRAINSTORM, on Friday, May 9, which marked the beginning of his quest for immersive cinema.

Trumbull has embarked on a project to write, produce, and direct using the MAGI technology for the production of his own feature films at Trumbull Studios. Through his comprehensive understanding of the needed technological advances, Trumbull has constructed a laboratory/stage/studio where he can shoot 120 fps 4K 3D live action within virtual environments, and see the results on the large screen adjacent to the shooting space. Trumbull announced: “This way, we can explore and discover a new landscape of audience excitement, and do it inexpensively and quickly.”

Trumbull Studios partnered with Christie to explore the potential of 3D 4K 120 fps projection, using the latestChristie Mirage 4K35 projection system. A special Mirage system will be installed in the Seattle Cinerama Theater for the premiere of UFOTOG, and the theater will soon offer the first public installation of Christie’s new laser illumination system in the fall of this year.

Trumbull Studios is committed to Eyeon Software, which has enabled the production of UFOTOG with the unheard-of impact of 3D in 4K at 120 fps, using Eyeon Fusion, Generation, Connection, and Dimension. “I chose to work with Eyeon because they are the only outfit already prepared to go 3D 4K at 120 fps. They are VFX and Broadcast designers that have sat in our seats and have been under the same pressures as us. Working with Fusion, and their new Generation 3D 4K playback system shows again that Eyeon brings their experience to the current workflow trends and beyond, inventing every day to solve the challenges we pose, and always go the extra mile,” says Trumbull.

Trumbull’s pioneering work also included his Academy Award winning 70mm 60 frames per second SHOWSCAN process, which was widely acclaimed by industry professionals, and that led to the development of the film BRAINSTORM, which was to debut the process worldwide, with Trumbull directing. Yet in the days of celluloid film and the attendant high 70mm print costs and projector upgrades, the process did not get traction. Now, with digital projectors regularly operating at 144 frames per second for 3D, implementing much higher frame rates and increasing resolution is proving to be a cost-effective way to improve movie impact and profitability.

One objective of Trumbull’s initiative is to demonstrate to the film industry that the successful future of the movie-going experience needs to be a “special event” on larger screens, at high brightness, and with ultra-high frame rate 2K and 4K presentations that cannot be emulated on television, laptops, tablets, or smartphones. “Today, the multiplex is in your pocket…” says Trumbull, “…so younger audiences are enjoying the benefits of low cost and convenience via downloading and streaming, causing tidal shifts in the entertainment industry, and particularly in theatrical exhibition. Theaters must offer an experience that is so powerful and overwhelming that people will see the reward of going out to a movie.”

Trumbull is legendary for his ground-breaking visual effects work on films such as 2001: A SPACE ODYSSEY, CLOSE ENCOUNTERS OF THE THIRD KIND, and BLADE RUNNER, as well as his directorial achievements on SILENT RUNNING and BRAINSTORM and special venue projects such as BACK TO THE FUTURE – THE RIDE, and a trilogy of giant screen high frame rate attractions at the Luxor Pyramid in Las Vegas. Trumbull has more recently been pursuing what he believes can usher in a powerful transformation of cinema itself. At a time when the major studios have embarked on a business model to produce only tent pole-franchise-superhero-comic book action films, theater attendance is in decline. Trumbull believes that a jolt of high technology energy is needed to improve the impact of these expensive productions via photographic and exhibition technology that fully delivers the production value that is presently being throttled down by 24 fps, 2K resolution identical to television, and low brightness 3D on small screens.

Joe Kleimanhttp://wwww.themedreality.com
Raised in San Diego on theme parks, zoos, and IMAX films, InPark's Senior Correspondent Joe Kleiman would expand his childhood loves into two decades as a projectionist and theater director within the giant screen industry. In addition to his work in commercial and museum operations, Joe has volunteered his time to animal husbandry at leading facilities in California and Texas and has played a leading management role for a number of performing arts companies. Joe previously served as News Editor and has remained a contributing author to InPark Magazine since 2011. HIs writing has also appeared in Sound & Communications, LF Examiner, Jim Hill Media, The Planetarian, Behind the Thrills, and MiceChat His blog, ThemedReality.com takes an unconventional look at the attractions industry. Follow on twitter @ThemesRenewed Joe lives in Sacramento, California with his wife, dog, and a ghost.
Share
Facebook
Twitter
Linkedin
Email
Print
WhatsApp
Pinterest
ReddIt
Tumblr
Previous article
Liseberg’s Multi-Inversion Multi-Launch Helix Coaster Opens
Next article
Bosque Mágico Coca Cola to Open Mexico’s First Magnetically-Launched Coaster with “Zombie Coaster” from Premier Rides