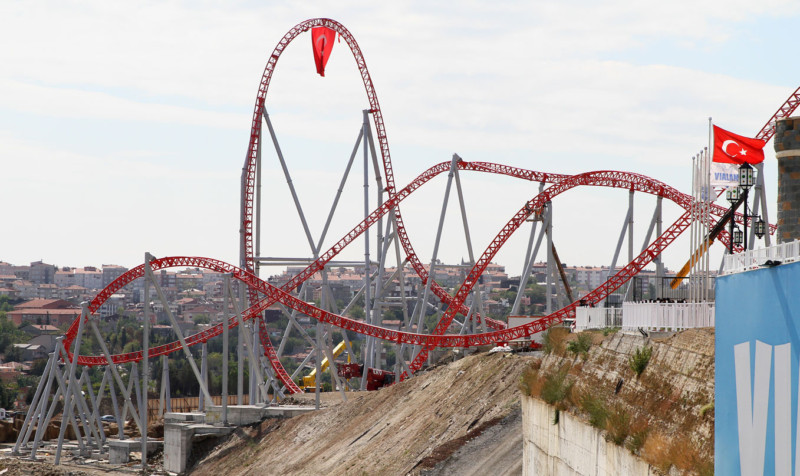 VIALAND General Manager Tolga Alişoğlustated that the company has made new investments within the theme park and said, “We started 360 degrees retail by integtrating the shopping center with the entertainment center. Also, with the addition of the VIALAND Palace Hotel that will open with 101 rooms this year, we will move our position one step forward. VIALAND has been a busy tourist attraction for visitors from the Middle East, Eastern Europe and The Balkans since the opening.”

VIALAND, opened at the end of May last year with an investment worth $ 650 million in partnership of Gursoy Group & Via Properties.

Resulting in 110 km speed in only 3 seconds, the park’s new coaster Nefeskesen (Launch Coaster) will be a must ride for adrenaline lovers.

‘Fatih’in Ruyası’ (Fatih Dark Ride) is another new attraction that will open in VIALAND in this season. On this ride, the conquest of Istanbul by Fatih Sultan Mehmet is illustrated with the animatronic figures.  Visitors will have the chance to see many conquest scenes like the ships carried overland and the entrance of Fatih to Istanbul. The ride which is one-of-a-kind in Turkey has an investment value of US$20 million.

The story of the magnificent underwater world of SpongeBob SquarePants, who is very popular in Turkey and throughout the world, will be in VIALAND Theme Park in the new season as well.

Moreover, children will find themselves traveling in the midst of nature in the 4D cinema with Dora The Explorer’s uninhibited exploration. This new attraction in VIALAND joins other favorite shows.

The speed train Maceraperest (Family Coaster) climbs a height of 22 meters and reaches a speed of 70 km after an exciting fall and passing through the corners at top speed. The train completes its single trip in 100 seconds on rails 580 meters long.

In Crazy River (Rafting Ride) the visitors will quickly travel between two waterfalls and live a safe rafting experience as a family.

Viking (Splash Coaster), is ranked as the 4th most popular type of ride in the world. This attraction offers an incredible experience with its 45 degrees sled landing on the water at fast acceleration.

In addition, visitors will experience the force of 5G at the Adalet Kulesi (Drop Tower) in VIALAND while falling down from 50 meter.

Joe Kleimanhttp://www.themedreality.com
Raised in San Diego on theme parks, zoos, and IMAX films, Joe Kleiman would expand his childhood loves into two decades as a projectionist and theater director within the giant screen industry. In addition to his work in commercial and museum operations, Joe has volunteered his time to animal husbandry at leading facilities in California and Texas and has played a leading management role for a number of performing arts companies. Joe has been News Editor and contributing author to InPark Magazine since 2011. HIs writing has also appeared in Sound & Communications, LF Examiner, Jim Hill Media, and MiceChat. His blog, ThemedReality.com takes an unconventional look at the attractions industry. Follow on twitter @themedreality Joe lives in Sacramento, California with his fiancé, two dogs, and a ghost.
Share
Facebook
Twitter
Linkedin
Email
Print
WhatsApp
Pinterest
ReddIt
Tumblr
Previous articleFulldome show creator Peter Popp talks about “Life of Trees” at IMERSA Summit 2014
Next articleLEGOLAND Florida Restores Portion of Historic Cypress Gardens