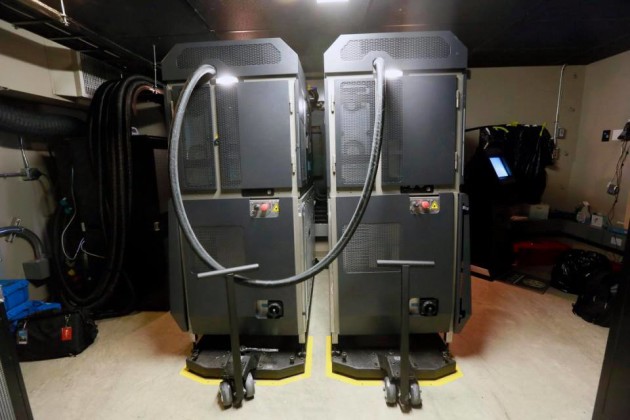 Washington, DC, USA — Smithsonian Theaters is launching IMAX’s new laser projection system in the Airbus IMAX Theater at the Steven F. Udvar-Hazy Center in Chantilly, Va., May 1—just in time for the release of Marvel’s latest film, Avengers: Age of Ultron. The new system represents a quantum leap forward in cinema technology—providing audiences with the sharpest, brightest, clearest and most vivid digital images ever, combined with a new level of immersive audio.

The Airbus IMAX Theater will be among the first few theaters in the world to feature this cutting-edge technology. The Airbus Theater’s 86-by-63-foot screen is one of the largest screens in the region. The theater’s upgrade will include a brand-new screen and new state-of-the-art 3-D glasses that optimize the laser-system experience in addition to the new sound and projection system. The theater will reopen with a new lineup of films, including Journey to Space, Living in the Age of Airplanes,Avengers: Age of Ultron, and coming soon: Tomorrowland.

The new IMAX laser system is a reimagination of the movie-theater experience. The dual 4K laser projection system is equipped with a new optical engine and suite of proprietary technologies capable of projecting an image with up to a 1.43:1 aspect ratio with maximum resolution and sharpness, unparalleled 2-D and 3-D brightness, industry-leading contrast and an expanded color gamut that will allow filmmakers to present more vivid and exotic colors than ever before.

The next-generation sound system delivers greater power and precision for ultimate audio immersion. The new system has been upgraded to 12 discrete channels plus sub-bass, and includes additional side channels and new overhead channels that will improve the system’s ability to position sounds around the audience.

In addition to built-in image calibration and audio-tuning features, the system is linked to a 24/7/365 Network Operations Center that is constantly monitoring thousands of points of information to ensure optimum performance, show after show. The combination of these new advances together with images and soundtracks remastered specifically for the new laser system will further elevate the audience’s ability to suspend disbelief through the world’s most advanced cinema technology.

“Airbus is proud to be a longtime supporter of the National Air and Space Museum, and we are very pleased with these improvements being made at the Airbus IMAX Theater,” said Barry Eccleston, president of Airbus Americas. “The enhanced experience offered to theater goers by the new laser projection system will serve to underscore why the Steven F. Udvar-Hazy Center is a truly ‘can’t-miss’ destination for visitors in the National Capital area.”

Joe Kleimanhttp://wwww.themedreality.com
Raised in San Diego on theme parks, zoos, and IMAX films, InPark's Senior Correspondent Joe Kleiman would expand his childhood loves into two decades as a projectionist and theater director within the giant screen industry. In addition to his work in commercial and museum operations, Joe has volunteered his time to animal husbandry at leading facilities in California and Texas and has played a leading management role for a number of performing arts companies. Joe previously served as News Editor and has remained a contributing author to InPark Magazine since 2011. HIs writing has also appeared in Sound & Communications, LF Examiner, Jim Hill Media, The Planetarian, Behind the Thrills, and MiceChat His blog, ThemedReality.com takes an unconventional look at the attractions industry. Follow on twitter @ThemesRenewed Joe lives in Sacramento, California with his wife, dog, and a ghost.
Share
Facebook
Twitter
Linkedin
Email
Print
WhatsApp
Pinterest
ReddIt
Tumblr
Previous articleVIDEO: Behind the Scenes of Germany’s Pavilion at Milano EXPO 2015
Next articlePHOTOS: Milano EXPO 2015 Day Before Opening